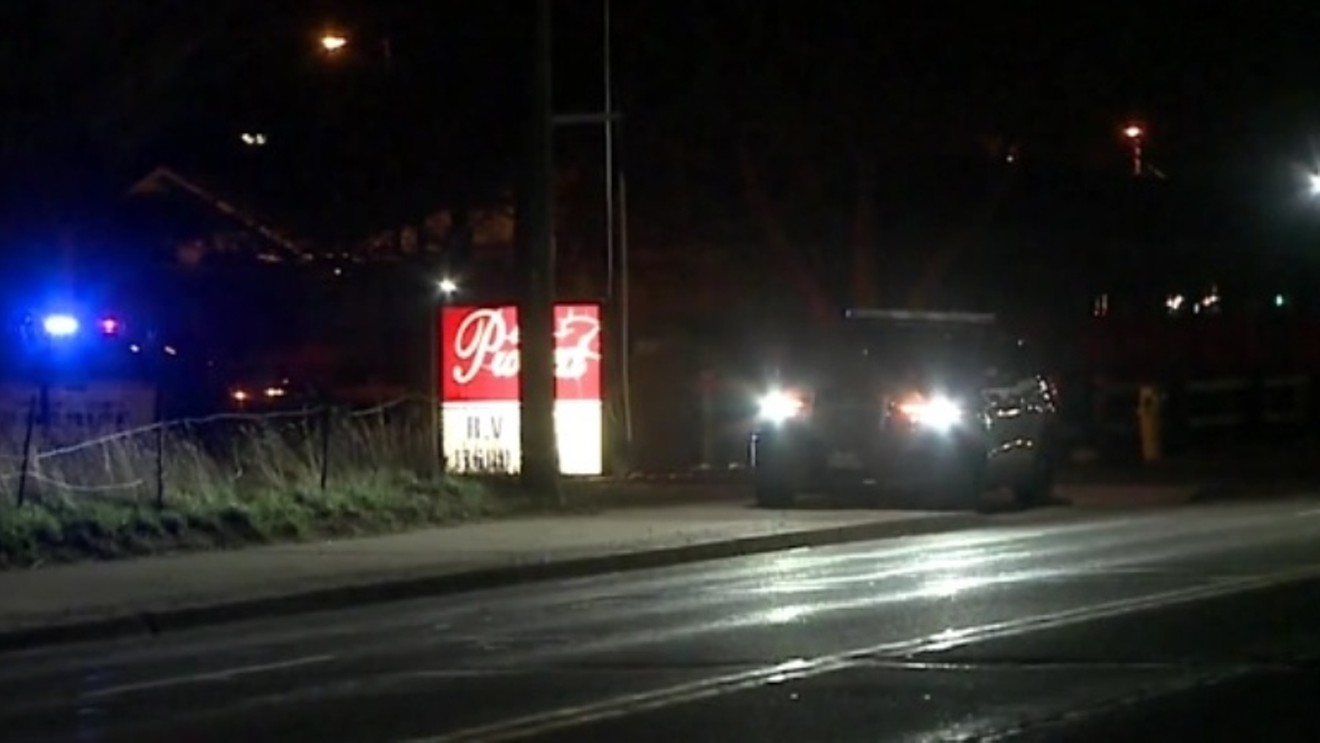 The scene of the attack early on April 13. Courtesy of Fox31
The Wheat Ridge Police Department has released the name of the person suspected of stabbing a police officer during an overnight incident near the Prospect RV Park, 11600 West 44th Avenue, along with additional details.

At around 1 a.m. today, April 13, according to the WRPD, two officers responded to a suspicious vehicle that had damaged a fence on the 11000 block of West 44th Avenue. There they found a man with a U-Haul truck that had been reported stolen.

After a confrontation, the man allegedly stabbed one of the cops multiple times, after which he was taken into custody by the second officer, who was able to call for backup and medical assistance.

The suspect has been identified as Andre Jones, 29.

According to the Wheat Ridge police, the investigation is ongoing. Continue for previous coverage.

Original post, 6:09 a.m. April 13: During the early-morning hours of April 13, a Wheat Ridge police officer was stabbed at an RV park. The officer is hospitalized, and a suspect is in custody.

First word of the incident came at 2:12 a.m. by way of a tweet from the Wheat Ridge Police Department. The message stated that officers "responded to a traffic issue at 44th and Robb at 1 a.m. this morning. After arriving on scene, one of our officers was seriously injured by the vehicle’s driver and transported to an area hospital. Another officer managed to take the suspect into custody."

A subsequent update changed the address of the initial call to 11000 West 44th Avenue, but the confrontation actually took place in the vicinity of the Prospect RV Park, a short distance away at 11600 West 44th Avenue.

WRPD public-information officer Sara Spaulding told Fox31 that a 911 caller informed police about a suspicious vehicle in the area, with the driver allegedly trespassing and damaging the property.

Upon their arrival, officers spotted the vehicle in question, described as a stolen U-Haul truck. Shortly thereafter, one of the officers was stabbed multiple times before the suspect was subdued and cuffed by another officer.

Authorities in Wheat Ridge have not identified the officer beyond revealing that he is a veteran of the department with adult children. At last report, he was undergoing surgery at a nearby hospital.

The stolen U-Haul has been removed from the area and police have "cleared the scene," according to an additional Twitter communiqué.

The department also tweeted: "We believe only one suspect was involved and therefore there is no additional threat to the public. The officer's family is at the hospital, and the support of our community is greatly appreciated."
KEEP WESTWORD FREE... Since we started Westword, it has been defined as the free, independent voice of Denver, and we'd like to keep it that way. With local media under siege, it's more important than ever for us to rally support behind funding our local journalism. You can help by participating in our "I Support" program, allowing us to keep offering readers access to our incisive coverage of local news, food and culture with no paywalls.
Make a one-time donation today for as little as $1.