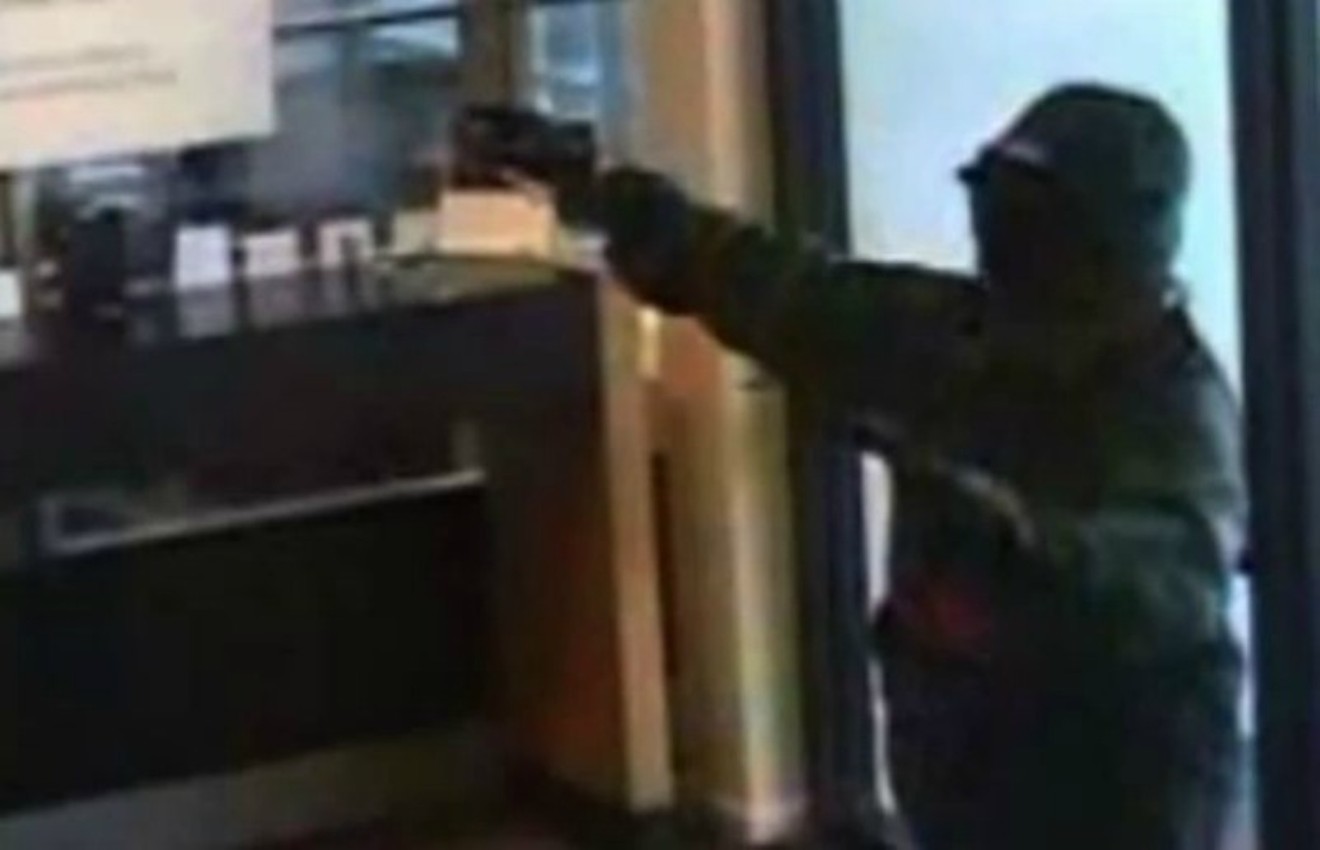 Surveillance footage of Christian Paetsch wearing a beekeeper's mask during the robbery. File photo
The City of Aurora has agreed to pay $325,000 to settle a lawsuit brought by fourteen people detained at gunpoint by police officers for over an hour during a clumsy search for a man who'd robbed a nearby bank while wearing a beekeeper's suit.

The incident took place in June 2012, with the complaint following nearly two years later, as we noted in a May 2014 post — and given the scope of the case, the passage of time and the number of alleged victims involved, a $325,000 settlement may seem modest. But as acknowledged by attorney David Lane, who represented the plaintiffs in the case, what went down was so bizarre that neither side could be sure what would happen if the matter went to court.

Christian Paetsch, the man who set the events in motion, was an unlikely criminal — a former high-school music teacher with a notably unassuming appearance. But on the day in question, he grabbed a gun, donned a beekeeper's outfit and held up a Wells Fargo affiliate in Aurora.

Lane picks up the narrative from there.

Another photo from the scene.
Fox31 file photo
"Because Paetsch was wearing the beekeeper's suit, he was completely hidden from view," he points out. "They didn't know if he was male, female, what race he was. But the money he took had a transponder in it, and it showed his location — so the Aurora Police Department knew he was heading for a busy intersection."

The APD reacted by "blocking the intersection," Lane continues, "and they ended up holding approximately 25 cars at rifle point, knowing that one of those cars contained the bank robber. But they couldn't figure out which one, because Aurora lacked a pinpoint tracking device. All they had was the kind of GPS you have on your cell phone, where it showed his general location but not exactly where he was."

In response, officers on the scene "ordered everyone out of their cars at gunpoint," Lane notes. "Some of the cars had little kids in them, some of them had single drivers in them. It was just a random collection of citizens who happened to be at an intersection at the same time."

Meanwhile, APD reps called the FBI to see if the agency had a pinpoint tracker they could use. And while the agency did indeed have such a tool in its arsenal, there were problems.

"It was a Saturday," Lane notes, "and the FBI office was closed. They managed to contact the on-duty person, who then got in touch with someone who allegedly knew how to use the pinpoint tracker — and the FBI kept saying the tracker was on the way. But it took at least an hour for the pinpoint-tracker guy to arrive, and when he got there, he didn't know how to use it." 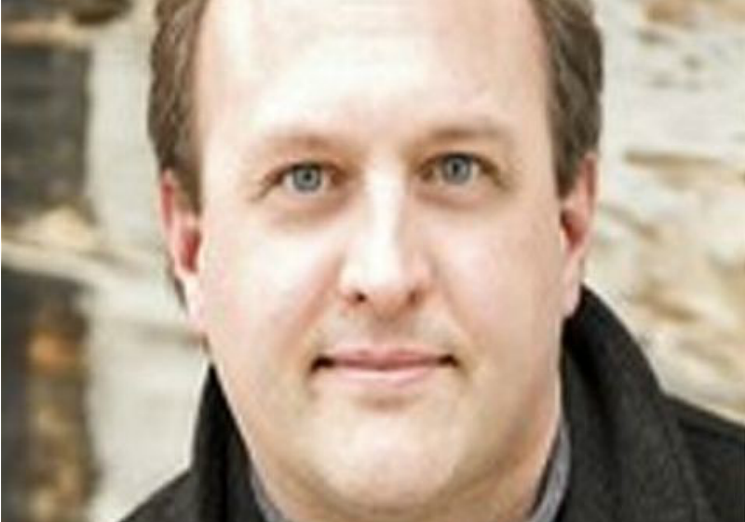 A portrait of an undisguised Christian Paetsch.
File photo
As this was happening, Aurora officers kept extracting drivers from their vehicles — Paetsch among them.

"He was one of the first guys they found," Lane points out. "They found the money and arrested him. But that didn't deter the Aurora police from continuing to pull people out of their cars at rifle point. They would pat these people down: innocent men, women and even children. They'd pat them down despite the fact that they'd already arrested the bank robber, and they knew it. And even though these people had no weapons, they'd cuff them and make them sit on the curb for an hour while they kept searching their cars illegally."

A lawsuit followed, and in the end, both sides agreed to mediation by a federal magistrate judge whose job, Lane says, "was to point out weaknesses on both sides."

He characterizes Aurora's defense like so: "'Maybe it wasn't perfect, but we did the best we could under these unique circumstances.' And it was a unique situation. It never really arises, and police departments aren't given any real training on it. So they said, 'We did the best we could.'"

Lane sees the attributes in this position. "All settlements are driven by what will likely occur after a jury trial, and in a case like this, there was a chance a federal judge might dismiss the case, since the law wasn't clearly established. Or a jury might say, 'The cops didn't wake up that morning thinking, "We're going to violate these people's civil rights." These people were inconvenienced and it was scary, but there was no malicious intent on the part of the cops, so let's not award very much in damages.'" 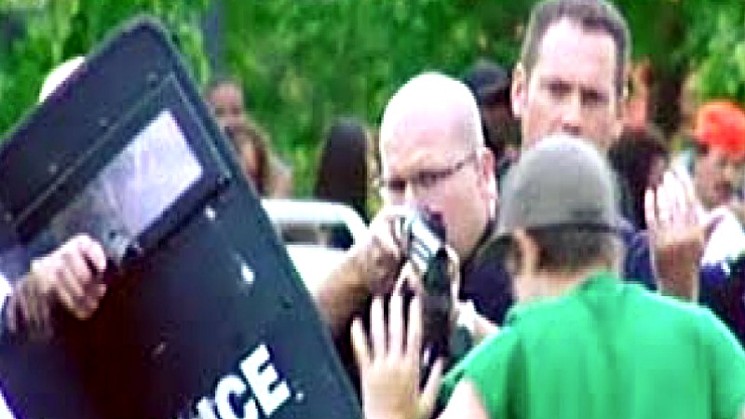 Attorney David Lane sees this CBS4 photo of an Aurora police officer pointing a rifle at an innocent teen bystander as exemplifying the post-robbery incident.
CBS4
Of course, there was also the possibility that jurors would see the above photo of a police officer pointing a rifle at an innocent teenager — an image included in the lawsuit — "and get really angry," Lane stresses. "And if they did, there might have been a seven-figure damage award. So this was a compromise, which is what all settlements are. Usually in those cases, plaintiffs walk away grumbling that they should have gotten a bigger settlement and the defendants walk away saying, 'We paid too much money.' But it's risk avoidance — the risk of getting shut out or the risk of a massive judgment."

The final award was divvied up under a confidential formula agreed upon by the plaintiffs in advance; Lane mentions that one person sustained a physical injury during the detention period, while a child essentially slept through it.

But, he adds, "part of the settlement involved Aurora saying they had learned their lesson and they would change their behavior — not the least of which was that they'd use their own pinpoint tracker, which they have now, instead of relying on the FBI. That was a victory for the plaintiffs. They wanted a policy change so this doesn't happen again."

Not that the odds of it reoccurring are especially high. Continue to read the original complaint.