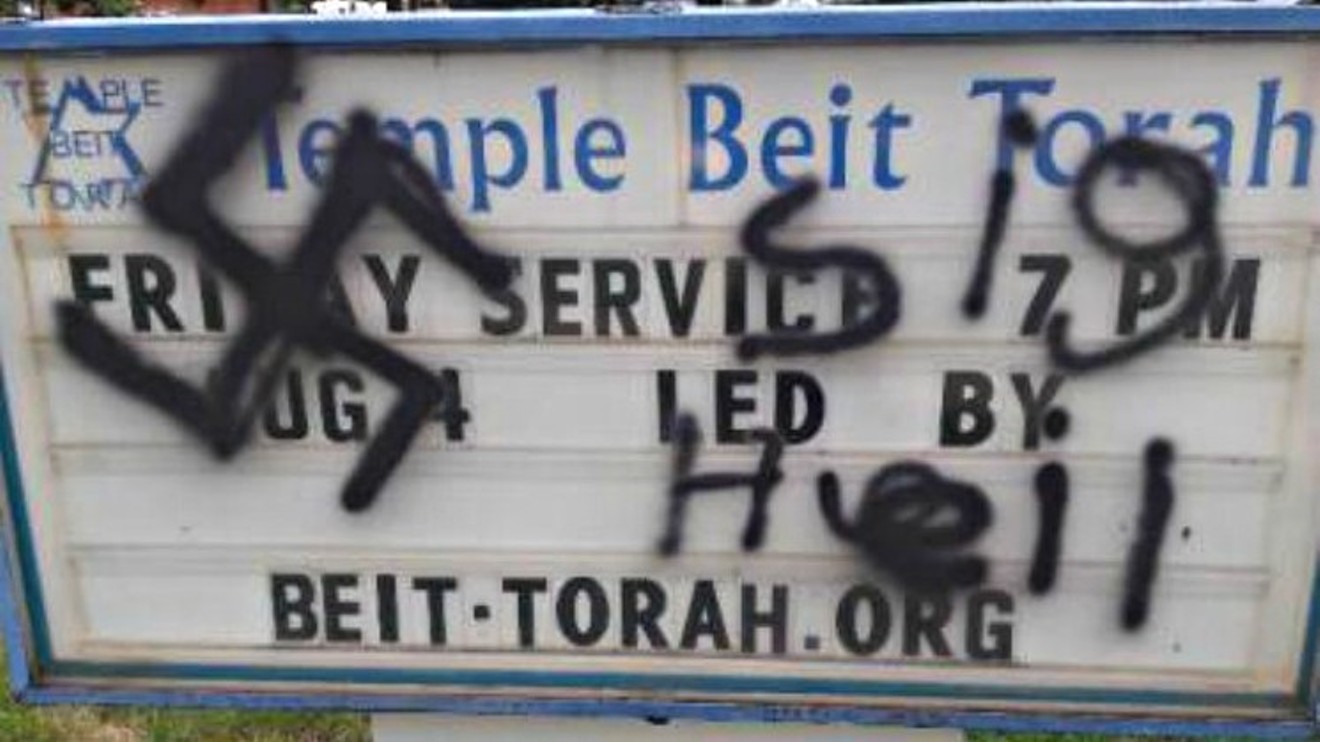 Vandalism on the sign of Temple Beit Torah in Colorado Springs circa August 2017. CBS4 file photo
The number of anti-Semitic incidents in Colorado tripled over a two-year period, according to statistics tracked by the state's branch of the Anti-Defamation League. These figures mirror data included in a new and disturbing FBI analysis of hate crimes in America, and Jeremy Shaver, senior associate director for the ADL here, believes the actual offense total is considerably higher.

"We've been seeing an increase in anti-Semitic and white supremacist activities in Colorado since 2015," Shaver notes, "and major police agencies like those in Denver and Aurora have reported more incidents than actually ended up making it into the FBI report. There are reasons why the FBI filters out some things, but other indicators are pointing to this increase. So the numbers give us a snapshot — and they probably represent under-reporting."

The FBI study, conducted under the auspices of the Hate Crime Statistics Act (HCSA), focuses on the year 2017. Nationwide, 7,175 hate crimes were reported during that span, a 17 percent increase from 2016, whose amount was up 5 percent from the previous year.

According to the feds, Colorado experienced 106 hate crimes in 2017, up from 104 in 2016. Last year's crimes included 61 deemed race-based, 26 motivated by religious intolerance and eighteen categorized as being related to sexual orientation.

In Denver, however, the number of hate crimes last year — seventeen — is actually down from 2016, when nineteen were recorded, and 2015, which saw twenty. Moreover, as the following graphic shows, the hate crime sums in Denver were actually much higher a decade or so ago, with 61 incidents recorded during 2009.

This graphic shows the number of hate crimes recorded in the 25 largest American cities, including Denver, from 2000 to 2017.
adl.org
Still, Shaver stresses that "the numbers don't tell the full story. For example, just in 2018, we've had sixty white-supremacist propaganda incidents just in Colorado. Many of those incidents wouldn't rise to the level of a crime. They're things like white-supremacist groups putting up a flier on a bulletin board at a college campus or hanging a banner over I-25 in Colorado Springs. But they represent an elevated level of extremist activity."

Hate crimes of other descriptions are on the rise as well, Shaver contends, though figuring out exactly how much can be tricky.

"Anecdotally, we're hearing from Muslim, immigrant and refugee communities about incidents that have happened where people aren't going to law enforcement," he reveals. "Either they don't think law enforcement can do anything about it, or some folks are just throwing up their hands and saying, 'This is the new normal. We have to suck it up and deal with it.' And that's very troubling for us."

So, too, is the very real prospect of increased anti-Semitic activity in the wake of the October 27 shooting at a Pittsburgh synagogue that killed eleven people and injured seven others.

"Whenever we see a large-scale attack like this, there are often ripple effects," Shaver points out. "In the days afterward, there were many headlines and stories about a rash of arson at synagogues in New York. So there's the copycat effect. But also, people are more alert, and so is law enforcement, and so reporting increases." The graphic shows "how things progress from biased attitudes to acts of bias to acts of prejudice, acts of discrimination and, eventually, acts of violence," Shaver says. "That's why we encourage parents, teachers and community leaders to pay attention to even lower-level offenses. They may not necessarily be criminal in conduct, but these things do tend to escalate — which is why we need to keep track of patterns and trends."

That's precisely what the folks at the Anti-Defamation League are doing, and what they're seeing is unsettling. Shaver cites "the number of anti-Jewish hate crimes reported to our office, which has significantly increased in the past two or three years. In 2016, we were told about six. In 2017, it more than doubled, to thirteen."

And that's not to mention the ones the ADL isn't hearing about.
KEEP WESTWORD FREE... Since we started Westword, it has been defined as the free, independent voice of Denver, and we'd like to keep it that way. With local media under siege, it's more important than ever for us to rally support behind funding our local journalism. You can help by participating in our "I Support" program, allowing us to keep offering readers access to our incisive coverage of local news, food and culture with no paywalls.
Make a one-time donation today for as little as $1.