Review: Wake Up and Smell the Coffee at the 20th Street Cafe 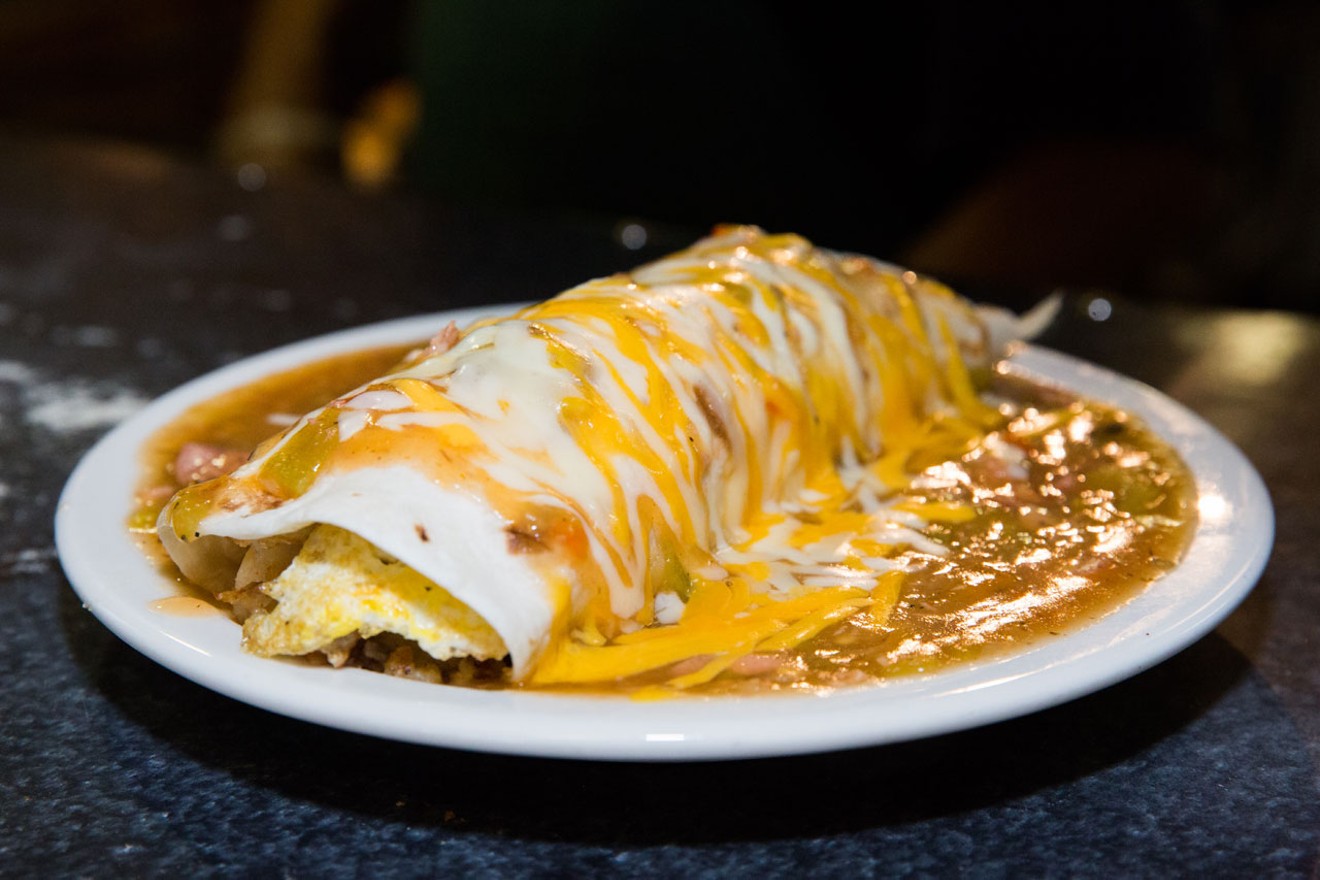 The breakfast burrito, smothered in green chile, is a year-round favorite at the 20th Street Cafe. Danielle Lirette
The 20th Street Cafe has made it through the Cold War, the Bee Gees, hanging chads, the housing crisis, the recovery and the recent political circus. While other venerable downtown eateries have disappeared recently — the Paramount Cafe, the Old Spaghetti Factory just two blocks away — this 72-year-old diner keeps adding old-time flavor to the Denver dining scene. But can that last?

The lease is currently secure, though Karen Okuno, who married into the third-generation family business and took it over with her husband, Rod, in 2000, wasn’t so sure it would be. “The people that bought the building we’re in, they came to us one day, and I thought they were going to tell us ‘Bye-bye,’” she recalls. “They asked us to please stay, and I broke down crying.”

That was years ago, however, and margins are slim. “It’s not even about making money anymore,” Okuno says.
You’ll look at the green vinyl tablecloths, the foil-wrapped butter pats, the specials penned in looping, multi-colored marker on the white board, and you’ll think that what the 20th Street Cafe needs are new tablecloths and a menu without cottage cheese as a side dish. You may be right. But what it needs even more is for a younger generation to decide that this restaurant is retro and therefore dope, ushering in a revival like the one Pabst Blue Ribbon has enjoyed over the past five years. 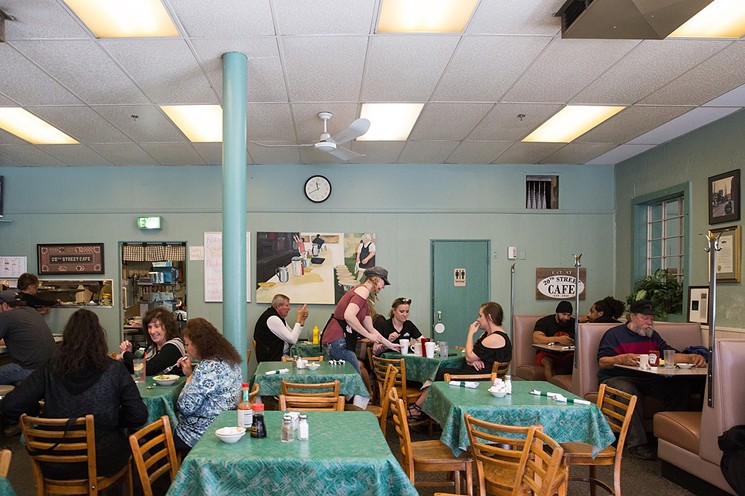 Inside the 20th Street Cafe.
Danielle Lirette
Crazier things have happened, and PBR and the 20th Street Cafe have enough in common to give me hope that one day soon, this sleepy breakfast-lunch spot might become the little diner that could, its low metal counter stools filled to capacity with the next generation of egg-loving millennials. Like PBR before it became cool, the 20th Street Cafe is a declining brand. No one talks about it; it almost never lands on anyone’s list of best brunches or cheap eats. Also like Pabst, its watered-down brew overshadowed by flavorful craft beers, this restaurant’s homespun recipes are out of step with the times, with no pecan-bourbon butter, no bacon flights, no kale-quinoa salads. But prices are cheap and portions are big enough for two. All of which means that it’s ready for rediscovery.

Most relevant to its comeback possibilities, the 20th Street Cafe is stubbornly, defiantly itself. For once, here’s a restaurant with no Instagram campaign, no paid influencers, no spin. And isn’t authenticity a prerequisite for hipness? Where other restaurants update their menus every season, if not sooner, this menu hasn’t changed in at least four years, and the one that’s in the works is primarily to raise prices a smidge. Where other restaurants are lucky to hang on to staff in this tight market, many on the 20th Street team (both front and back) have been together for decades. One server has been wiping down these counters and topping off coffee for 25 years; the other server is Karen’s daughter Carol. If you come in twice, they’ll recognize you; three times, and they’ll greet you by name. Food is prepared the way it’s always been, because Rod still helms the kitchen. He grew up cooking with his grandparents, who founded the restaurant, and with his father, who ran the kitchen before Rod took over. “I don’t think there’s ever been a time when there’s not been an Okuno there,” says Karen. 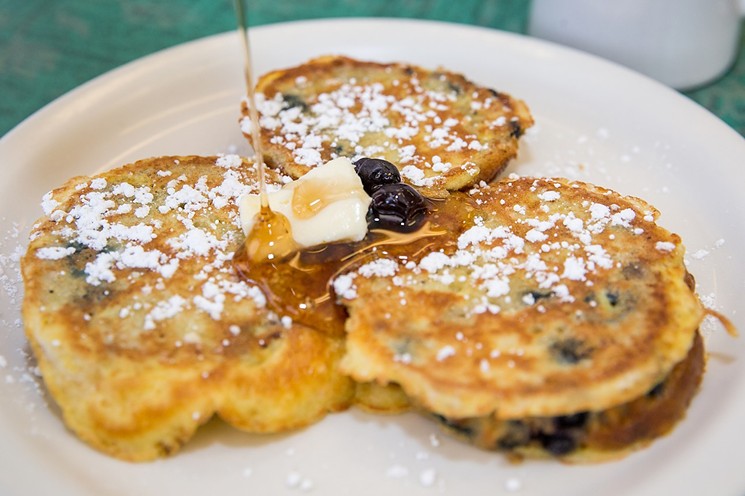 Blueberry French toast at the 20th Street Cafe.
Danielle Lirette
I’ve eaten at too many trend-chasers over the years with the right lighting, the right soundtrack and the right drinks, all of which left me cold; they could’ve been in Portland or Austin or Nashville. Not so the 20th Street Cafe. It may have fake plants, a soundtrack courtesy of KOSI 101 and nothing stronger than coffee, but it does have an old-time Denver soul, which is why you need to go there for breakfast tomorrow. It serves lunch, too, but my bet’s on breakfast, which is offered until closing — at 2:30 p.m. during the week and 1:30 p.m. on weekends.

The Denver omelet is as big as a truck and as honest as a full day’s work. Made with three eggs, it arrives in a trifold, like a golden-yellow letter, with contents threatening to spill out the ends. What it lacks in fluffiness it more than makes up for with a cheesy filling that doesn’t skimp on ham, peppers or onions. Like almost everything on the breakfast menu, it comes with hash browns and another starch, a nice change from contemporary spots where sides cost extra. Given the choice of toast or pancakes, get the pancakes, which are light, tender and very similar to what I make at home, nothing like the over-mixed, plate-sized spongy ones so often served at brunch spots. An order of biscuits and gravy is too heavy to eat solo unless all you’re doing next is couch-surfing, but it’s terrific to share, with an avalanche of white peppery gravy studded with sausage. 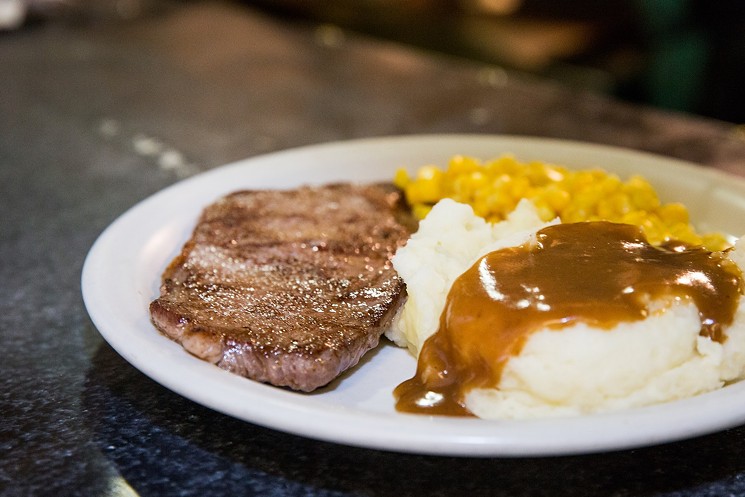 Steak and potatoes, a popular lunchtime item.
Danielle Lirette
When they took over the kitchen, Karen wasn’t stuck on tradition. “I thought, ‘Let’s change this, let’s just do that,” she recalls. But Rod, who has worked in the restaurant for more than 45 years, knew better. His advice to her: “Our customers don’t want a lot of change. They want things to stay the same.” That’s why the chicken-fried steak is still made the way it’s always been, with New York Strip pounded thin, battered and fried until crisp, then smothered with brown gravy. For lunch, try it with house-whipped potatoes and a side of corn. At breakfast, choose pancakes and hash browns and you won’t need to eat until tomorrow.

Rod and Karen did allow themselves a few breaks with tradition. One was to discontinue dinner service, since Rod was the only one doing the cooking. (Their son, Nick, hopes to take over the business when his parents retire; for now, he’s working at Ocean Prime.) Another was to cut back on the Japanese items that Rod’s Japanese grandparents had put on the menu from the start, to appeal to the large but now declining Japanese-American community that grew in this part of Denver right after WWII, drawn by the nearby Denver Buddhist Temple. Fried rice does remain at breakfast and lunch, but it’s heavy with soy sauce. Ramen-like noodle bowls are also on offer, with halved hard-boiled eggs and sliced beef, pork or chicken floating on top. You can imagine how unusual these dishes must have seemed to non-Japanese-American customers in the restaurant’s heyday. Without dashi or wakame, however, they’re relics of a time when Asian food was highly Americanized, just a step away from Grandma’s noodle soup.

It’s hard to imagine the 20th Street Cafe without two of the Okunos’ additions: blueberry French toast, made from a sliced blueberry muffin, and green chile, a Denver classic that here is more brown than green, thanks to a splash of tomato sauce. You can order it on the side to spice up a very retro hamburger steak, which is nothing more than a steak-sized hamburger patty, for those of you too young to know. But it’s best smothering the breakfast burrito, which comes stuffed with hash browns, scrambled eggs and your choice of ham, bacon or sausage. As big as a dinner plate, the burrito is a bestseller year in, year out, and reason enough to make the 20th Street Cafe your new morning spot. 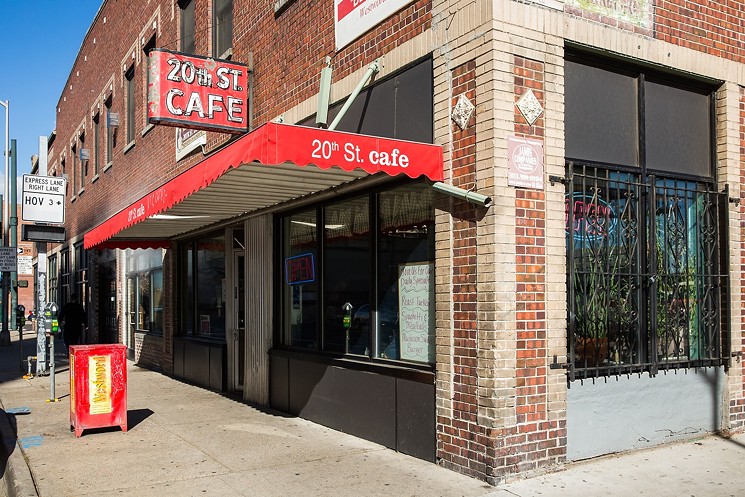 The Twentieth Street Cafe has been open for 72 years.
Danielle Lirette
KEEP WESTWORD FREE... Since we started Westword, it has been defined as the free, independent voice of Denver, and we'd like to keep it that way. With local media under siege, it's more important than ever for us to rally support behind funding our local journalism. You can help by participating in our "I Support" program, allowing us to keep offering readers access to our incisive coverage of local news, food and culture with no paywalls.
Make a one-time donation today for as little as $1.