Join Ace Peking Duck House on November 8 for a feast benefiting charity. Anna Regan
Ace Eat Serve and Steuben's are known for presenting delicious plates of bao, ramen, wings, burgers and fried chicken, but the company behind these eateries also dishes out support to local nonprofits and charities.

"Typically, we choose to support organizations that support youth, education or are connected to the hospitality industry. But we also have connected with organizations because we have a team member who feels strongly about supporting, and we want to support them in their giving," says Emily Biederman, COO of the Secret Sauce restaurant group. "We have also found that giving back with our teams is great for camaraderie and morale."

To make a reservation for this year's fete, reserve a spot via Tock with the number of guests in your party. Each duck costs $120, and feeds up to four people. That means if your party is one to four, you get one duck; five to eight people will be served two ducks; and nine to twelve guests get three.

Proceeds from the event benefit the Denver Housing Authority Youth Employment Academy, a non-profit working to break the cycle of generational poverty through practical education.
click to enlarge Chef Thach Tran, or another guest chef, will serve Peking duck tableside.
Mark Antonation
At the inaugural event last year, Ace sold 100 ducks and raised $17,000 for the same charity. Ace's Peking Duck House took over for the equally popular Wings & Whiskey fundraiser that the restaurant hosted annually pre-COVID. The change came in order to keep crowds and close contact to a minimum — while Wings & Whiskey was fun, says Biederman, it just wasn't COVID-friendly.

"Just like everything else, we had to make a shift, and we knew that people loved our Peking duck; we were one of the only places in town doing it, so we started there, deciding to transform Ace into the Ace Peking Duck House," she adds. "It was a socially distanced, seated event, bringing people together in a responsible way — for the first time for many — all sharing in the same menu."

The dinner proved successful, so the company decided to keep the duck dinner and do it again this year.

"Since we can now all safely be together, we have added a live DJ, bar seating and a cocktail lounge to encourage guests to come early for a drink and to hang out after," says Biederman. "With all proceeds going to the organization, of course."

There will also be specialty cocktails by Woody Creek Distillers, and a raffle featuring goods such as Icelantic Skis, a Yo Colorado Stand Up Paddle and more. The ping-pong room will also be open during the event.
click to enlarge 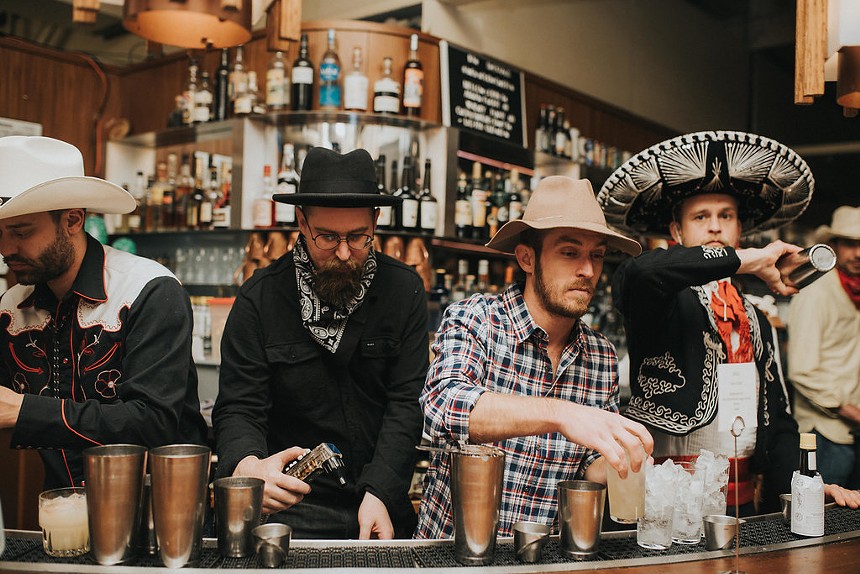 The Steuben's Toy Drive is back this year!
Secret Sauce
Secret Sauce's fundraising history began in 2006 when Steuben's opened in Uptown and hosted a toy drive, which was created by Sean Kenyon (who now owns Williams & Graham and Occidental). That event featured an Eighties prom hosted at Rock Bar. The next year, it moved in-house, and went strong every year until 2020 and COVID precautions.

This year, though, it's coming back on December 9 with the theme "spaced out" — think aliens, astronauts, planets, that space shirt you got for your birthday...anything goes. Everyone who brings a toy to donate will get a drink on the house. There will also be snacks, a DJ, photo booth and more. The toy drive will continue the week of December 12-18 at Steuben's, which will also be offering a special menu with proceeds and toys going to the Denver Housing Authority.

Secret Sauce aims to support the community beyond events, as well. In March 2020, Steuben's started providing weekly meals to Urban Peak, an organization that helps youth experiencing homelessness. The restaurant has continued the meals, serving around fifty people each week. Guests can help by ordering the Urban Peak Cocktail, which changes periodically, but the proceeds from which always go to support these meals.
click to enlarge

Team members from Secret Sauce's restaurants volunteer at Project Angel Heart.
Secret Sauce
There's the house initiative, too, which started as a way to get the team engaged in philanthropy. Once a month, a group of staff and management volunteers go to Project Angel Heart and package meals for the daily meal delivery programs. This charity brings a week's worth of flash-frozen, made-from-scratch meals and snacks to people who need assistance.

"All of these efforts are not only a way to support impactful organizations, but also connect with the community," Biederman concludes. "It keeps our teams involved and engaged in things outside of the restaurants, and fosters a culture of giving in our community."
KEEP WESTWORD FREE... Since we started Westword, it has been defined as the free, independent voice of Denver, and we'd like to keep it that way. With local media under siege, it's more important than ever for us to rally support behind funding our local journalism. You can help by participating in our "I Support" program, allowing us to keep offering readers access to our incisive coverage of local news, food and culture with no paywalls.
Make a one-time donation today for as little as $1.