Bar Bar, an Old-School Dive Like No Other, Launches Fundraiser 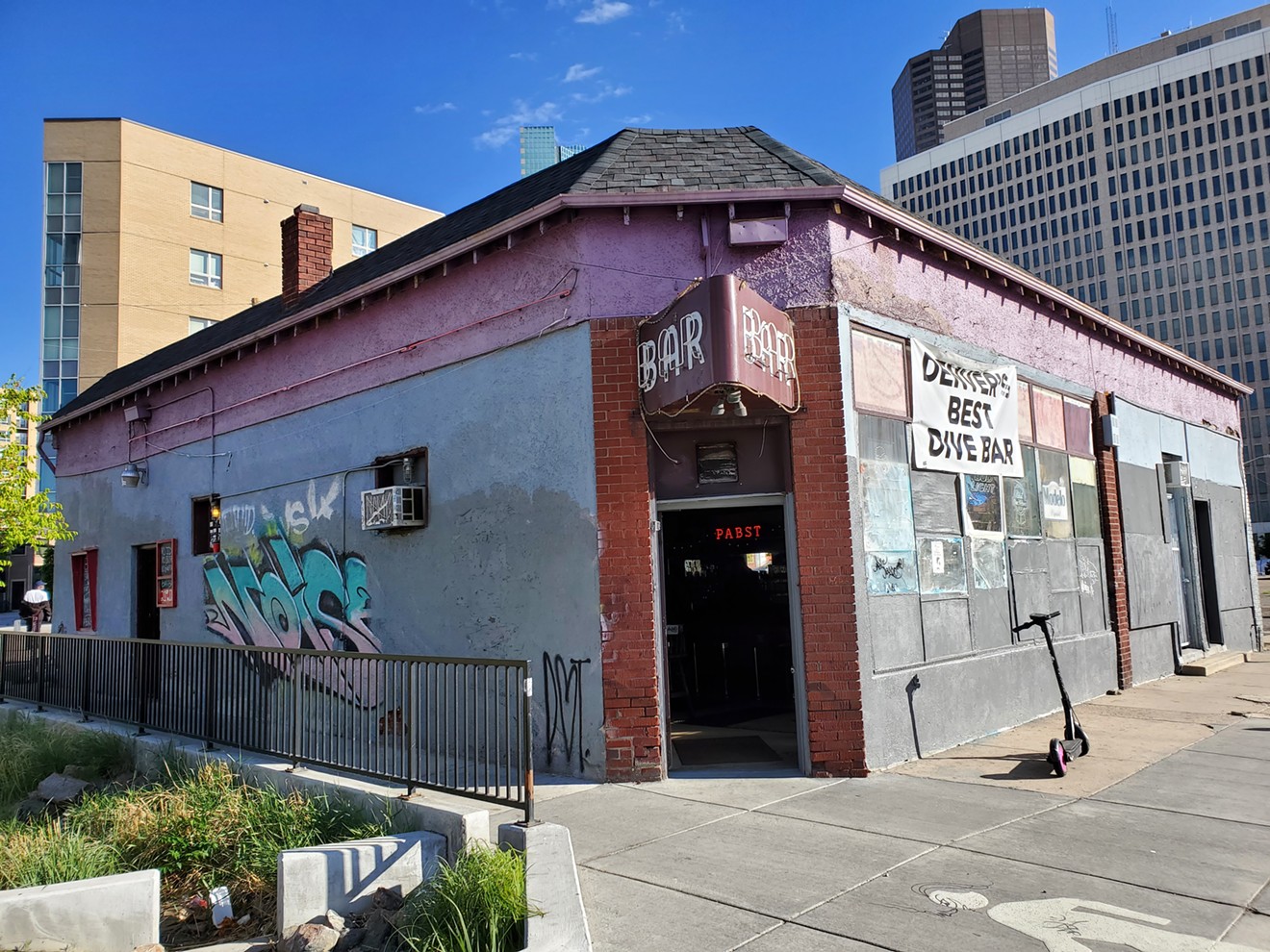 Molly Martin
It's an ongoing lament: Denver is changing, fast — and not always for the better. One by one, beloved  classics have shuttered. But now we have a chance to help save what could be the city's diviest dive bar, by donating to a new fundraiser.

The cash-only Carioca Cafe, better known as Bar Bar because of the glowing red, repetitive sign over the door, has been pouring drinks at 2060 Champa Street for over a century. Its storied past includes an era in which the back room, which now houses a pool table, operated as a whorehouse. Later, it was frequented by stars like Dick Van Dyke and Mr. T when the area surrounding it was filled with movie production houses.

Today, Bar Bar is one of Denver's last true dives, where the booze is cheap, the bathrooms are...questionable, and the rotating cast of characters can always be depended on for a good time and even better stories.

In 2008, Westword wrote about the uncertain future of Bar Bar. At the time, it had seven years left on its lease, and it seemed likely that it would be ’dozed over for yet another luxury apartment complex once the economy bounced back. But 2015 came and went, and Bar Bar remains — on a month-to-month lease ever since, according to Ed, the longest-tenured bartender at the place after nine years pouring drinks for current proprietor John Kennedy (of the Canadian Kennedys, Ed notes of the man he calls "the best boss I ever had in my whole damn life"). 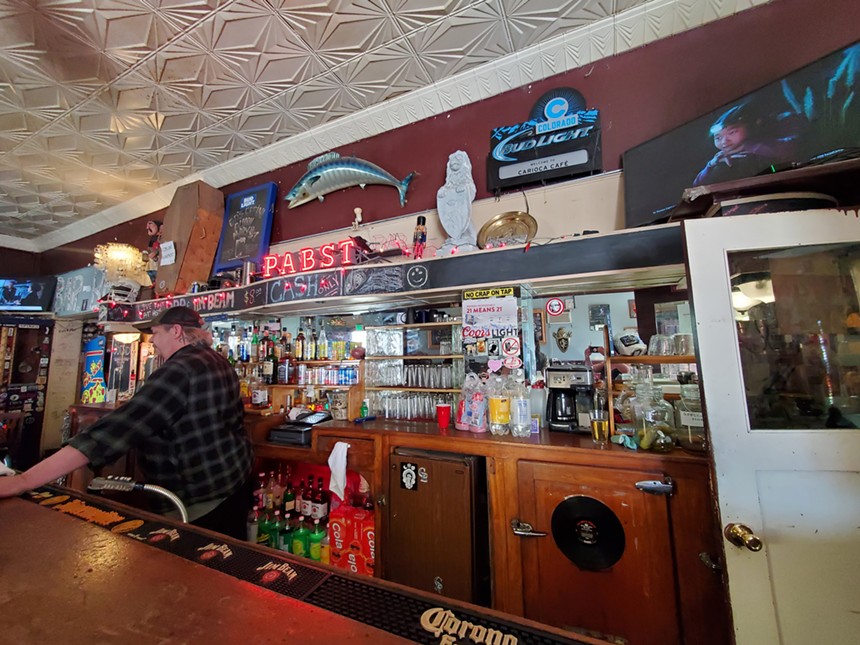 Originally from Texas, bartender Ed came into Bar Bar "upset and mad at the world" one day and "never left."
Molly Martin
But it's not the landlord or developers threatening the future of Bar Bar this time. "There's been a few times where we've really been on the verge of needing a fundraiser," explains Richard Granville, a local musician who, after playing a show at the bar three and a half years ago, eventually started working there, pouring drinks and then taking over booking and promoting shows.

Bar Bar has long been known as a live-music venue. The first time I stumbled in, sometime around 2005, there was a rowdy punk band playing just inside the doorway — a scene I'd encounter many times after that. It was the live music, Granville says, that got Bar Bar through the last two-plus years as it, like every other bar and restaurant around, navigated the pandemic. "It was like, every time we were almost out on our asses, I got one show to pull off and we'd make a grand or two, or even just a few hundred bucks, and then had another show planned the next night, and it was like, 'Well, hold off on that fundraiser,'" Granville recalls.

It turns out, though, that Bar Bar has never had a cabaret license — which is now required in Denver for "any establishment licensed to sell alcohol which offers or provides live entertainment or dancing for its guests," according to the Department of Excise and Licenses website. Bar Bar does have a standard liquor license; it's up for renewal July 2.

The cabaret-license issue came to the forefront after Bar Bar received an order to show cause from the department for an incident "on or around March 25" in which an underage, undercover police cadet was allowed inside after allegedly showing an "Under 21" ID and subsequently ordering and being served two cans of PBR. "It kind of set off this domino effect," Granville says. 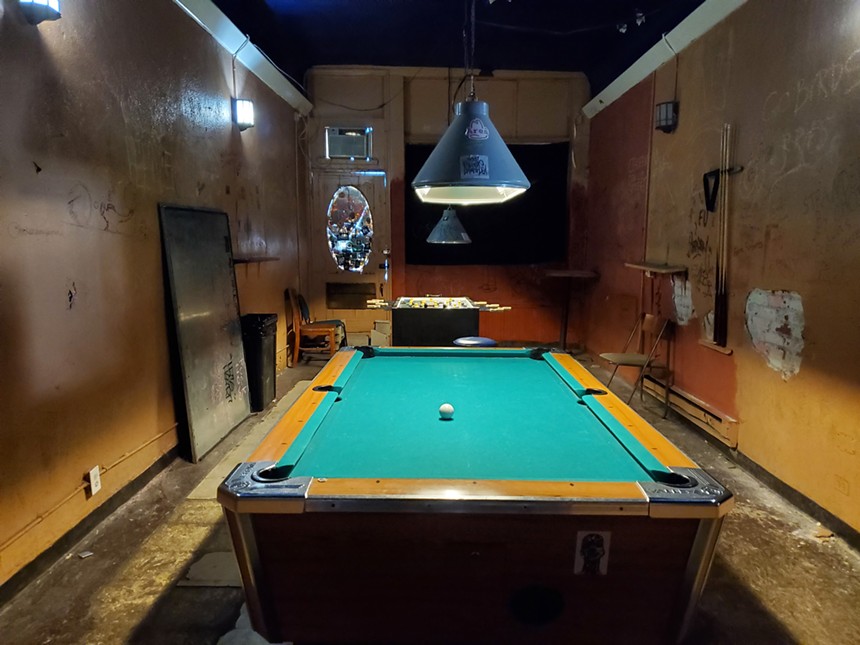 The game room at Bar Bar was an Eisenhower-era whorehouse.
Molly Martin
This was Bar Bar's third time receiving a violation for underage drinking since 2018. The bartender involved in the prior two incidents no longer works at the establishment, but this most recent one involved Granville's brother, Daneal, who came on a couple of years ago to help. It was a particularly busy show night, Granville says, adding that he believes the cadet just slipped through.

Regardless, Bar Bar is currently working with the city on a settlement agreement, which is a typical course of action in situations like this. "The city often looks to do settlement agreements before revoking or suspending a license because our focus is on compliance instead of closing a bar down, which can impact the employees — unless there are egregious and repeated violations that result in violence, injuries or death, as was the case in the recent Cabin Tap House and Beta Nightclub cases that got lots of media coverage," explains Eric Escudero, director of communications for Excise and Licenses.

The settlement will force Bar Bar to close for a total of fourteen days, according to Granville. The details are still being finalized, but "that's a hiccup that hurts us, but it's also not that big a deal. We could take that in stride and keep going forward," Granville explains. But then there's the added challenge of securing that cabaret license in order to keep the shows going.

The fees for the license itself are reasonable — $500 for the standard cabaret application and $750 annually. But the process involves inspections, which Granville admits could be a hurdle for the ancient bar. 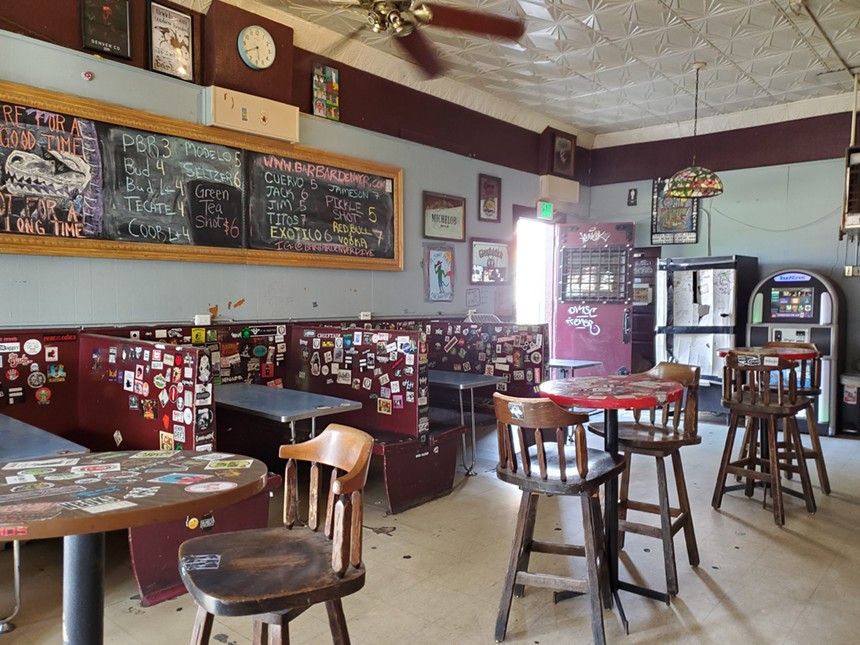 Molly Martin
His top concerns are the plumbing and electrical systems, and while many friends of the bar have offered free labor for any renovations that need to be done, Granville knows that these kinds of repairs require experts and can be costly. "I just want to be prepared for the worst, and even in the best-case scenario, we're still facing expenses," he notes.

In addition to helping cover rent, utilities and other basic bills (particularly through the fourteen days of closure that are coming), as well as any needed renovations, donated funds will be used to help replenish the bar's depleted stock. "It's been abysmal since COVID," Granville says. "It's been really hard to rebuild our stock. The music is really the only way we've been able to keep the place open."

In addition to launching the GoFundMe with a goal of $10,000, Granville is hoping to partner with other venues for benefit shows.

In the meantime, Ed will continue to unlock the doors at 8 a.m. for anyone looking for a drink. "Just give me time to put the register together. Then I can serve you, then I can set up everything else," he says. But not the espresso machine that made a debut at the dive a decade ago. Ed got rid of that. "They're heavy, by the way," he notes.

And Bar Bar will keep pouring until last call right before 2 a.m. "We're not ready to lay down just yet," Ed concludes.
KEEP WESTWORD FREE... Since we started Westword, it has been defined as the free, independent voice of Denver, and we'd like to keep it that way. With local media under siege, it's more important than ever for us to rally support behind funding our local journalism. You can help by participating in our "I Support" program, allowing us to keep offering readers access to our incisive coverage of local news, food and culture with no paywalls.
Make a one-time donation today for as little as $1.