Opening Today: The Bardo Wheat Ridge Is No Longer in Limbo 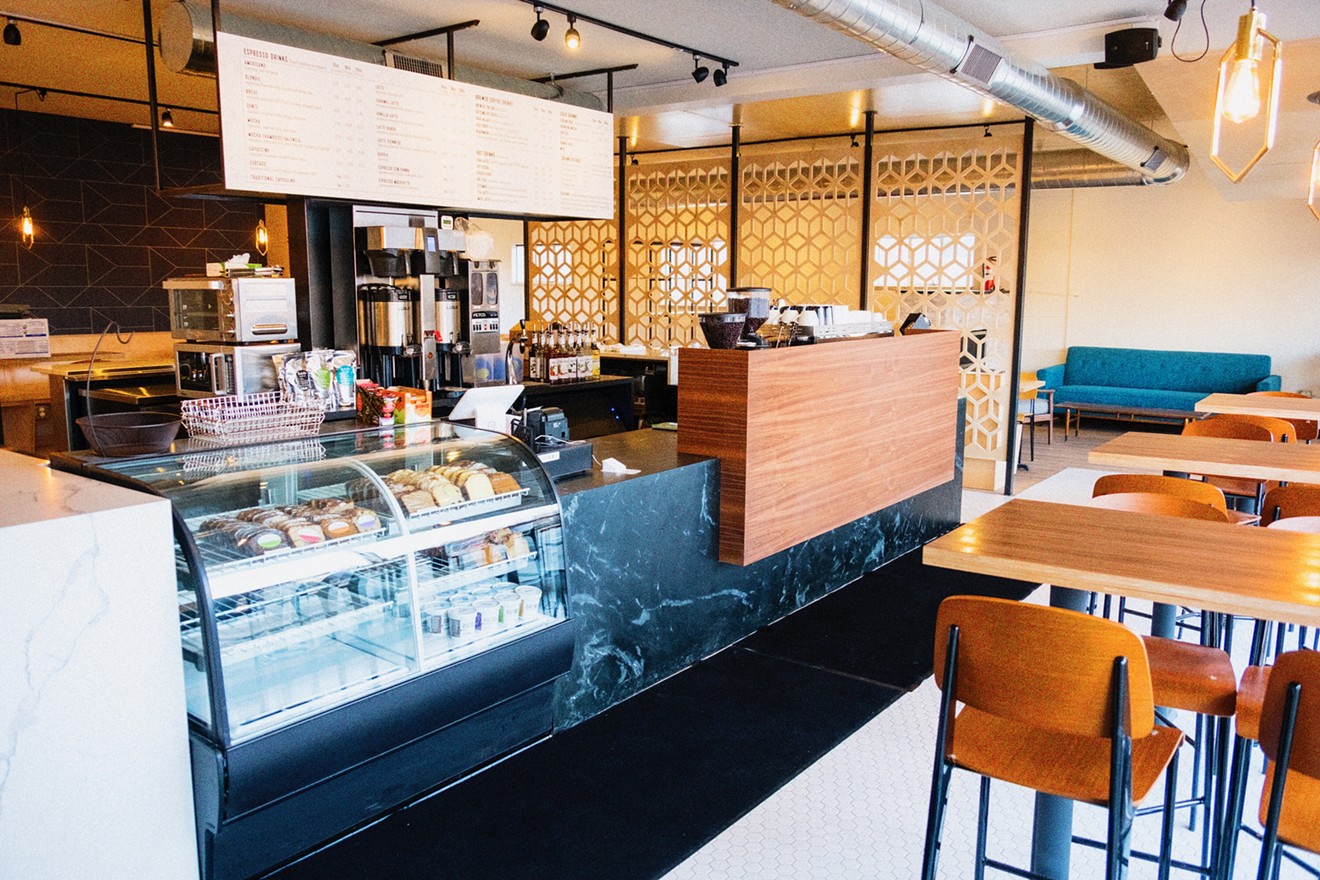 Inside the new Bardo. Chris Graves
After more than a year and a half, Chris Graves is finally ready to celebrate the opening of his new coffee shop, the second location of the Bardo Coffee House, at 6150 West 38th Avenue in Wheat Ridge.

When Graves opened the first Bardo (named for the Tibetan limbo between death and rebirth) on South Broadway in 2010, he did it out of necessity. “I did a lot of work in coffeehouses and I couldn’t find one where I felt comfortable,” he explains. His desire for a cup of coffee and a space to work trumped his lack of knowledge and motivated him to create the Bardo, which has been a Baker neighborhood staple ever since.

Is now soon enough?
Danielle Krolewicz
in 2016 he sold the internet company he owned and ran for twenty years and used some of the proceeds to sign a lease on the new Wheat Ridge space shortly thereafter. “In an internet company, all interactions are remote…and the interactions are complicated, because the business is complicated. People usually contacted me because they were angry about something, and the problems were difficult to solve,” explains Graves. “Coffee is 180 degrees opposite in every way. All of your interactions are personal; you’re dealing with joy. If there’s a problem, it’s really easy to solve, and everybody knows what you’re selling.”

“After twenty years of internet stuff, I’m done,” he says. “I’m ready to be the coffee guy.”

Although there are similarities between the two Bardos (coffee at both, for example, comes from Kaladi Roasters, as does all the equipment to prepare that coffee), the differences are much more obvious — one of the most noticeable being interior design. While the Baker location is what Graves describes as “bohemian”, the new location in Wheat Ridge is much more modern. Graves was inspired by the building itself, which was built in the 1950s and maintains a mid-century modern appearance. Two seating areas on either side of a stone fireplace are filled with sleek couches and chairs that add to the mid-century aesthetic. In contrast to the South Broadway spot, everything here looks brand new. Lots of light enters through the glass storefront, and a phone booth makes its home behind the bar. A long table in back is open for community seating as well as reservations for group meetings.

Bardo's coffee comes courtesy of Kaladi Coffee Roasters.
Danielle Krolewicz
“I’m going up against Starbucks out here more directly,” says Graves about his stylistic approach. “There isn’t as much of a coffee culture out this way compared to Denver. When I first thought about moving into this area, I Googled "coffee" and there was this big hole right where this location is.”
Graves is filling that coffee gap — much to the excitement of Wheat Ridge residents, who have been offering support for the last year on Facebook while waiting in anticipation for the shop to open.

Another difference between the two locations is the hours. While the original Bardo is open daily from 6 a.m. until 1 a.m. during the week and even later on the weekends, Wheat Ridge will have more modest hours: 7 a.m. to 4 p.m. to start, eventually expanding to midnight, with the possibility of staying opening later once the liquor license Graves recently applied for comes through. He even plans to have a Bardo Blackmore coffee stout on tap.

Bardo's decor captures the mid-century spirits of the building itself.
Chris Graves
Graves’ new location is equipped with a commissary kitchen, left over from the previous tenant, Karebear Bakery. His hopes for the future include using the kitchen to offer a menu with food prepared in-house, but for now he is sticking with what he knows: Vert and Etai’s grab-and-go food items and pastries from City Bakery, to name a few. He also hopes to add a patio in the front come springtime and a beer garden with additional parking in the back — all in due time.

For now, enjoy today's soft opening. Graves invites former customers of the Bardo in Baker who may have moved out of the city limits in search of more affordable real estate (just as he did) as well as neighbors and long time residents of Wheat Ridge looking for a Starbucks alternative. Unlike its counterpart, there's plenty of parking provided.