Beltran's Meat Market & Grill Is a Family Affair in Northglenn

Outside Beltran's at 120th and Washington. Mark Antonation
The smells of sizzling meats and spices spill out of the compact headquarters of Beltran’s Carniceria & Grill at 11920 Washington Street in Northglenn. Two things will almost certainly happen when you pass through the front door of the immaculate butcher shop: Someone will say “hello” (most likely the clerk at the front counter), and you’ll be drawn immediately to the back of the market by the aromas of good things cooking.

Go past the case of fresh-baked pastries (from the nearby Panaderia Lyly), past the shelves of Mexican kitchen utensils (there’s even a press built just for making the fat, oval tortillas called huaraches), and up to the order counter — that’s where you’ll find tacos, tortas, burritos and other Mexican specialties cooked from scratch every day.

Tacos with carne asada (bottom) and barbacoa (top).
Mark Antonation
You can’t pay a visit to Beltran’s without at least indulging in a couple of quick tacos with any number of fillings (alambre, barbacoa, lengua, buche and tripitas, to name just a few), but if you’re looking for supplies for your own Mexican feast, a second stop at the butcher counter is also in order. The sparkling cases are packed with layer after layer of thin-cut beef (arrachera, palomilla and milanesa, for example) separated by sheets of butcher paper, cubed and sliced meats marinating in various spice blends (the same house marinades used by the kitchen when you order tacos), seafood (especially now, during Lent), and mounds of ground beef ready for burrito filling or chili. What you won’t find are T-bones or other steaks; Beltran’s cuts those to order based on your preferences.

Cesar and Valerie Beltran opened their market in December 2016 after running a similar shop in Las Cruces, New Mexico, for nine years. Cesar is from Chihuahua, Mexico, and Valerie is a Colorado native; they have two children each from previous marriages and two together — and all six of the kids have helped in the family business. Currently Aaron and Alec, the two youngest, work at Beltran’s; Aaron is 21 and also attends business school so that he’ll be prepared to take over one day. 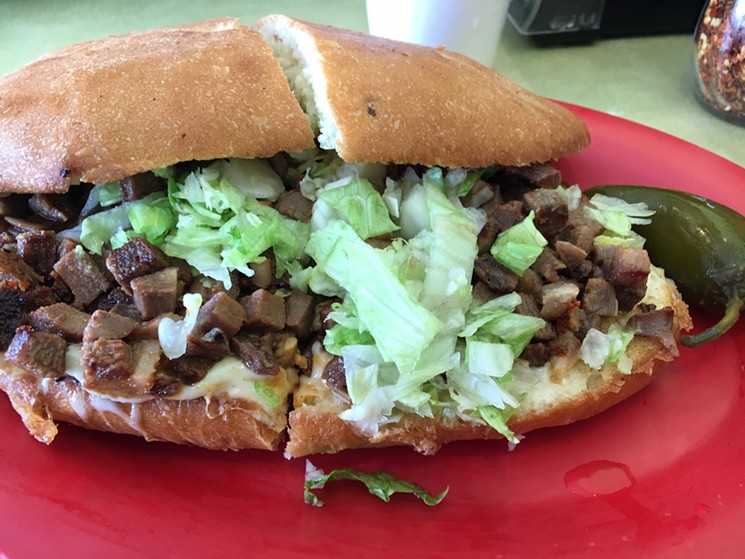 Bread from a local panaderia and slow-cooked lengua make this torta great.
Mark Antonation
“In a lot of ways, we’re mixing old with new,” Valerie says. Most of the meats are cut to the needs of Mexican home cooks, but the shop’s mixed customer base also means there’s a demand for meat more typical of what’s found at big grocery stores. And while Cesar prefers to run his business the old-fashioned way, one customer at a time, he’s also seen the value of social media and other modern marketing techniques that Aaron and Alec have introduced. Their influence is noticeable on the shop’s website, Instagram feed — filled with gorgeous food photos — and Facebook page, which announces daily specials.

In addition to meat, the market is stocked with tortillas (some from a tortilleria the Beltrans founded and then sold), bulk items such as beans and chiles, a small selection of produce, and a wide range of Mexican beverages, snacks and staples. There are also no fewer than three bins filled with chicharrones in different sizes: small curls seasoned with chile powder, larger pieces for snacking and enormous slabs that could feed a family for days.

Thin-sliced and marinated meats at the butcher counter.
Mark Antonation
Beltran’s opens every morning at 8 a.m., serving breakfast burritos and tacos right off the bat. “The most important thing is that we’re not a fast-food restaurant,” Valerie explains. If you order your burrito with chorizo, for example, that chorizo was ground and seasoned by the shop’s butcher. She notes that her family has been in the region dating back several generations — “since before this was even a state” — so native Coloradans will find the green chile they love, along with Mexican hamburgers and other Den-Mex fare. The kitchen also makes big batches of menudo and pozole every day, unlike many other eateries that only offer the soups on weekends. Tortas, tamales, quesadillas and daily specials (like a caldo de camarones that popped up earlier in the week) round out the menu. Even the horchata and jamaica are made from scratch, not powdered mixes.

If you’re looking to feed a group and don’t want to cook, Beltran’s offers two “taco boxes” — pizza boxes filled with tacos and all the accompaniments. For $30, you can get a box with twelve tacos, chips, salsa, beans and rice; $100 will get you fifty tacos, plus salsas (which you can also buy by the tub in the cold case) and chopped cilantro and onions. The boxes are impressive to behold, packed with a wreath of tacos with all the extras wedged into the center. 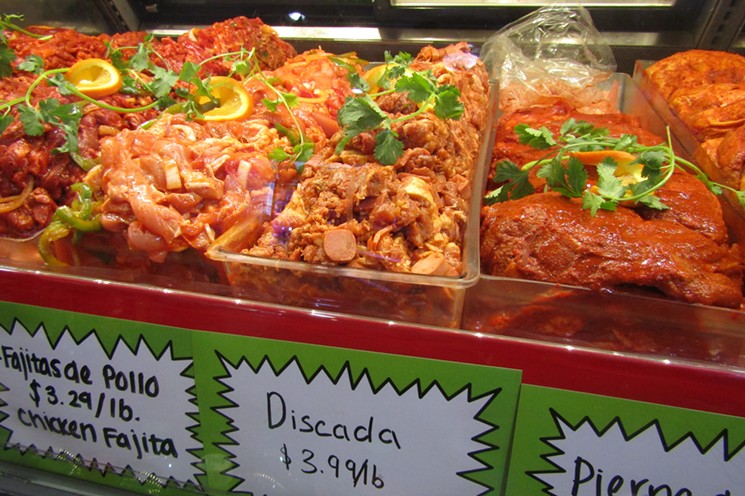 Discada is a mix of meats in a marinade.
Mark Antonation
The shopping center where Beltran’s does business is like many other strip malls throughout metro Denver: You’ll find a pho joint, a Walgreens and a pawn shop on the same corner, and you can also donate plasma and renew your driver’s license all in one stop.

But unlike many other aging retail centers, this one sports a fresh coat of near-surgical white paint, as well as fresh customers that Beltran’s is bringing to the area. The meats don’t sit for very long at the butcher counter before those customers snap them up, and the restaurant in the back maintains a busy pace through much of the day.

It’s the kind of sizzle you hope to find in a new business — and a sure sign that you’re in good hands.