The Ten Best Classic Steakhouses in Denver in 2021 The sugar steak at Bastien's. Mark Antonation
Cattle call! Denver's history as a cowtown makes it a great place to seek out a steak. And while there are plenty of upscale chain steakhouses downtown or in the Tech Center, other, more original options are tucked into neighborhoods all around town...and beyond.

You can certainly go big and go beefy at some of these spots, but you can also keep things low-key (and even relatively low-cost) while satisfying all your carnivorous cravings.

Here are Denver's best classic steakhouses for every budget:
click to enlarge 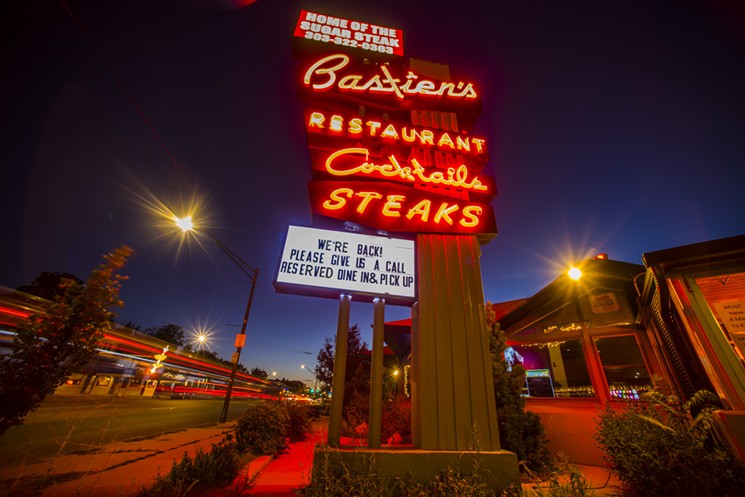 You haven't really lived in Denver until you've dined at Bastien's.
Evan Semón

3503 East Colfax Avenue
303-322-0363
There may not be another restaurant in Denver that’s used its history to such great advantage, keeping everything noteworthy from the past — from the mid-century aesthetic to the quality steaks that meet the expectations of modern diners. The family-run business dates back to the 1930s, but the current incarnation was constructed in 1958, in distinct Googie style from the roofline to the neon sign. Inside, dinner in the bird’s-nest loft feels intimate and old-school, and a sugar steak — served no more than medium-rare — gives a taste of Colfax Avenue’s swingin’, stylish earlier days.

1000 Osage Street
303-534-9505
The Buckhorn Exchange delivers a Wild West experience as a true, old-timey spot that still has meaning for today’s diners. Before Henry “Shorty Scout” Zietz opened the Buckhorn in 1893, he rode with Buffalo Bill; in 1905, he fed President Teddy Roosevelt, then headed off with him to hunt big game. The menu is loaded with big game to this day, meat that demands a pretty big price tag. If you’re on a nineteenth-century budget, head to the historic bar on the second floor, where you can snack on Rocky Mountain oysters, enjoy entertainment and gaze upon all the taxidermied specimens distantly related to what might arrive on your plate. 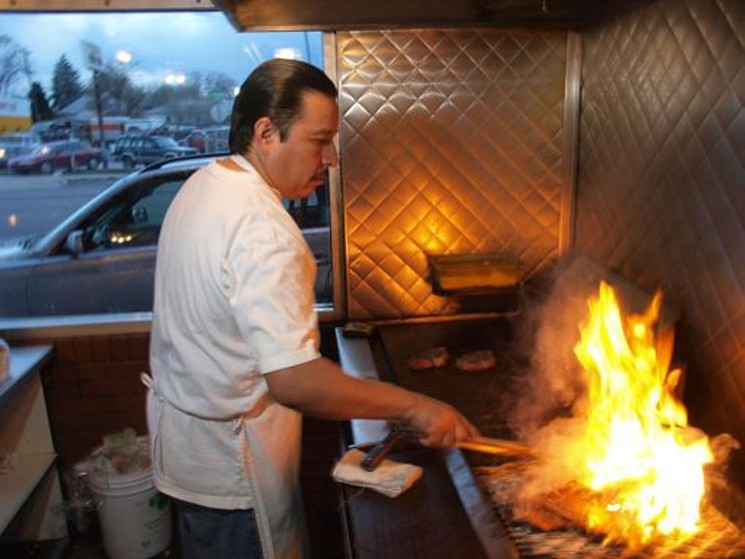 The Columbine cooks (seen here before the pandemic) cook up a mean flame-grilled steak.
Westword Staff

300 Federal Boulevard
303-936-9110
At night, the low-slung roof and garish yellow sign of the Columbine Steak House beckon like an Edward Hopper painting, though perhaps without the pervading sense of loneliness. Through the window, passersby on Federal Boulevard can witness a throng of waiting diners, often spilling out the front door, queued up to order a steak from the grill man as flames leap behind him. The steaks are simple and cheap, kissed by fire, leaking fat and blood, flecked with a touch of salt and pepper. Columbine has been serving steaks for more than a half-century, and what you'll get on your plate is exactly what your parents and grandparents would have gotten here. The diner side is strictly no-nonsense — just pay and eat and make room for newcomers. At the bar, the pace is a little more relaxed; just don't ask for anything too fancy (meaning anything with more than two ingredients) or you'll be met with suspicion. Bring cash and leave the coat and tie at home.

4710 National Western Drive
303-298-0525
The National Western Stock Show has now missed two years running, but the Stockyard Saloon still has the beef all year. This isn't your typical steakhouse; the menu leans more toward bar food. But that just gives you the chance to order a New York strip sandwich — a full-sized strip, not sliced or shaved — so you can grab your beef with both hands and eat like nobody's watching.

19192 Highway 8, Morrison
303-697-4771
Some Denver residents would rather leave the Fort to the tourists, but others know that the Old West-themed steakhouse still cooks up some tasty beef — and bison too, if that's your preference. Treat it like a museum of the Old West  or a kitschy time capsule from another era, but when the dinner bell rings, you'll find your fill of every tasty part of the animal — from the tongue to the oysters. 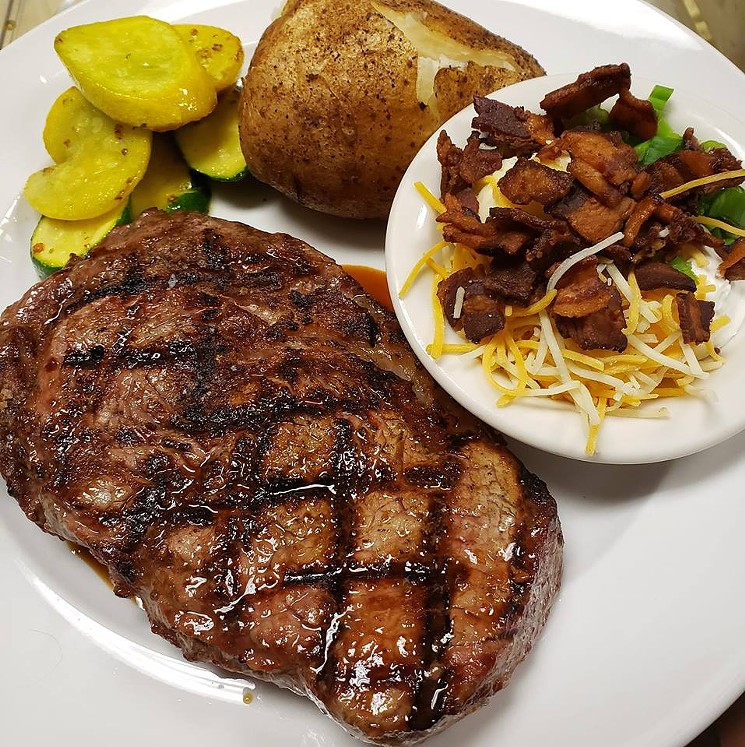 Prime beef is back on the menu at Luke's.
Courtesy of Luke's, A Steak Place

4990 Kipling Street, Wheat Ridge
303-422-3300
Luke's is nearly thirty years old, but has been under new ownership for the past two years. You can go all out with USDA Prime ribeye or New York strips, but the Choice steaks are still cooked nicely here and ring it at surprisingly low prices. You'll find all the comfort of a neighborhood classic with none of the stuffiness of the high-end national chains. 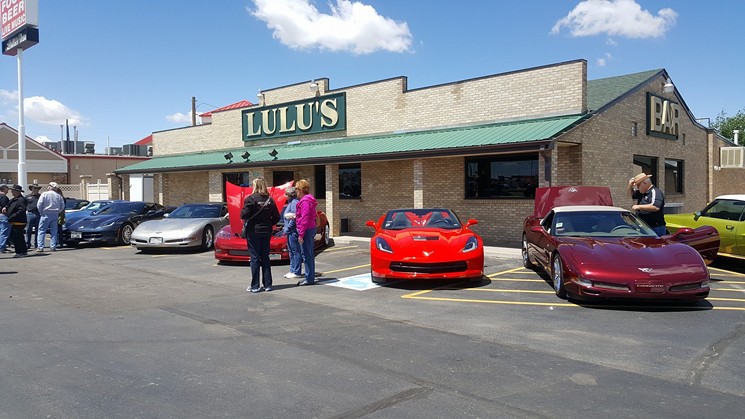 Car club rallies were a common sight at Lulu's Inn before the pandemic, and they'll certainly return soon.
Facebook/Lulu's Inn

33355 CO-36, Watkins
303-261-9672
When Lulu’s Inn opened in the ’40s, the classic country joint was actually in the country...but today Watkins is just minutes from the eastern edge of Aurora, and a short hop from Denver International Airport and its nearby hotels. Lulu’s left its original home and moved a few doors down in the ’80s, into a bigger space with a bar, full dining room and dance floor, although the live music and dancing are on hold for now. But steak and lobster Fridays are back, and you can still grill your own steak on the patio barbecue (or let the pros do it for you). 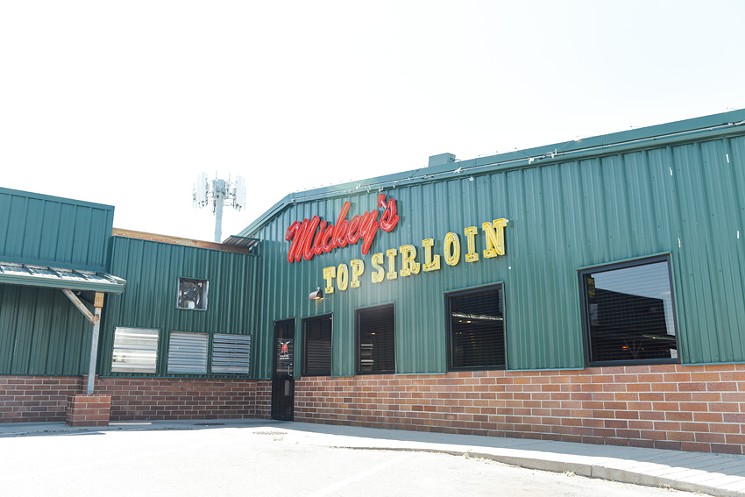 Mickey's Top Sirloin has been serving up steaks for more than half a century on this spot.
Kenzie Bruce

6950 Broadway
303-426-5881
In 2005 Mickey's replaced its decrepit, decades-old home with a shiny, family-friendly new building on the same lot. The atmosphere is still casual and diner-like, though, and the menu is basically unchanged — which guarantees that you'll get a whole lot of food for just a little bit of money. Most of the fare is solidly Italian and Mexican, especially at lunch; steaks star on the dinner menu. The meat might only be choice grade, but the kitchen knows how to make the most of it.

3517 South Elati Street, Englewood
303-789-0911
Steakhouse 10 isn't where you go for a cheap slab of beef; the menu reflects modern steakhouse prices for quality cuts. But the place feels old-school and welcoming like the best neighborhood eateries, and you'll often see the same folks in the dining room so you can nod hello to familiar faces on the way to your table. The combination of properly cooks steaks and service that makes you feel like family has keep the place going for the past 25 years.

4300 West Colfax Avenue
303-623-2233
This is where you go when you're craving steak for breakfast, with eggs sunny-side up, in a burrito or as chicken-fried steak, one of the best things on the menu. This no-frills diner has been cooking beef for so long, even the "famous" chili con carne is named for another restaurant that closed decades ago.
KEEP WESTWORD FREE... Since we started Westword, it has been defined as the free, independent voice of Denver, and we'd like to keep it that way. With local media under siege, it's more important than ever for us to rally support behind funding our local journalism. You can help by participating in our "I Support" program, allowing us to keep offering readers access to our incisive coverage of local news, food and culture with no paywalls.
Make a one-time donation today for as little as $1.