Big B's Cider
Pumpkin beers and pumpkin-spiced cocktails are in full swing now that fall is in the air. And while cider is often thought of as a fruity, sweet, apple-forward drink, there are many varieties that are perfect for fall. These seasonal ciders have everything you need for cooler, shorter days — from pumpkin and salted caramel to bourbon-barrel-aged goodness. 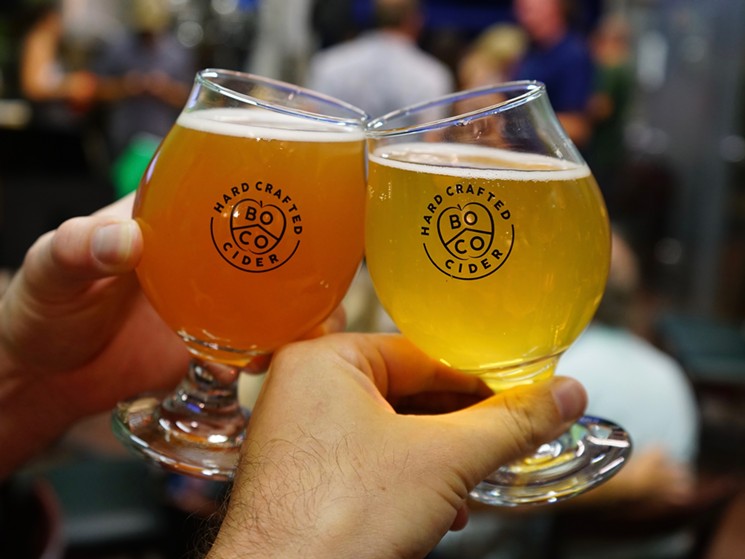 1501 Lee Hill Drive, Unit 14, Boulder
720-938-7285
Bococider.com
Pie pumpkins from local Munson Farms are roasted in the kitchens of Bridge House (a charity helping the homeless) and then infused into BOCO’s hard cider base. It doesn’t end there, though. That intense pumpkin cider is then blended with a barrel-aged cider base. Instead of cinnamon and traditional pumpkin pie spices, oak-vanilla notes and a strong pumpkin flavor predominate.

The popular Salted Caramel Apple Cider can be found at the Colorado Springs taproom or in nearby spots.
Boxing Brothers

11455 County Road 17, Firestone
303-532-9949
Wildcider.com
In the summer months, the bold lemon-basil and flavorful pineapple ciders are popular choices at Wild Cider. But in the fall, it’s pumpkin’s time to shine. The seasonal cider pours a light-orange hue with an aroma of pumpkin and fall spices. Also not to be missed is Spiced Apple, with hints of cinnamon, nutmeg and orange.

Big B's makes a wide range of seasonal ciders, but the Pomeau is something special.
Big B's

39126 Highway 133, Hotchkiss
970-527-1110
Bigbs.com
Bourbon Barrel Aged Pommeau is a rare, small-batch cider starting off with local, organic Winesap apples, the juice of which is fermented and cellar-aged. It’s then distilled by Peach Street Distillery in Palisade and blended with fresh, organic apple juice and hard cider. Finally, the concoction ages in bourbon barrels for twelve more months. The result is similar to an apple wine brandy, with an apple and bourbon nose and flavors of vanilla and smoke.

350 Terry Street, #130, Longmont
303-258-6910
Stvraincidery.com
St. Vrain Cidery is a great place for both cider lovers and newbies, with 36 ciders on tap. For the best seasonal flare, the housemade Gingerbread cider is always a fan favorite. This sweet cider is spiced with ginger, cinnamon and dark sugars to go along with the crisp apple taste.