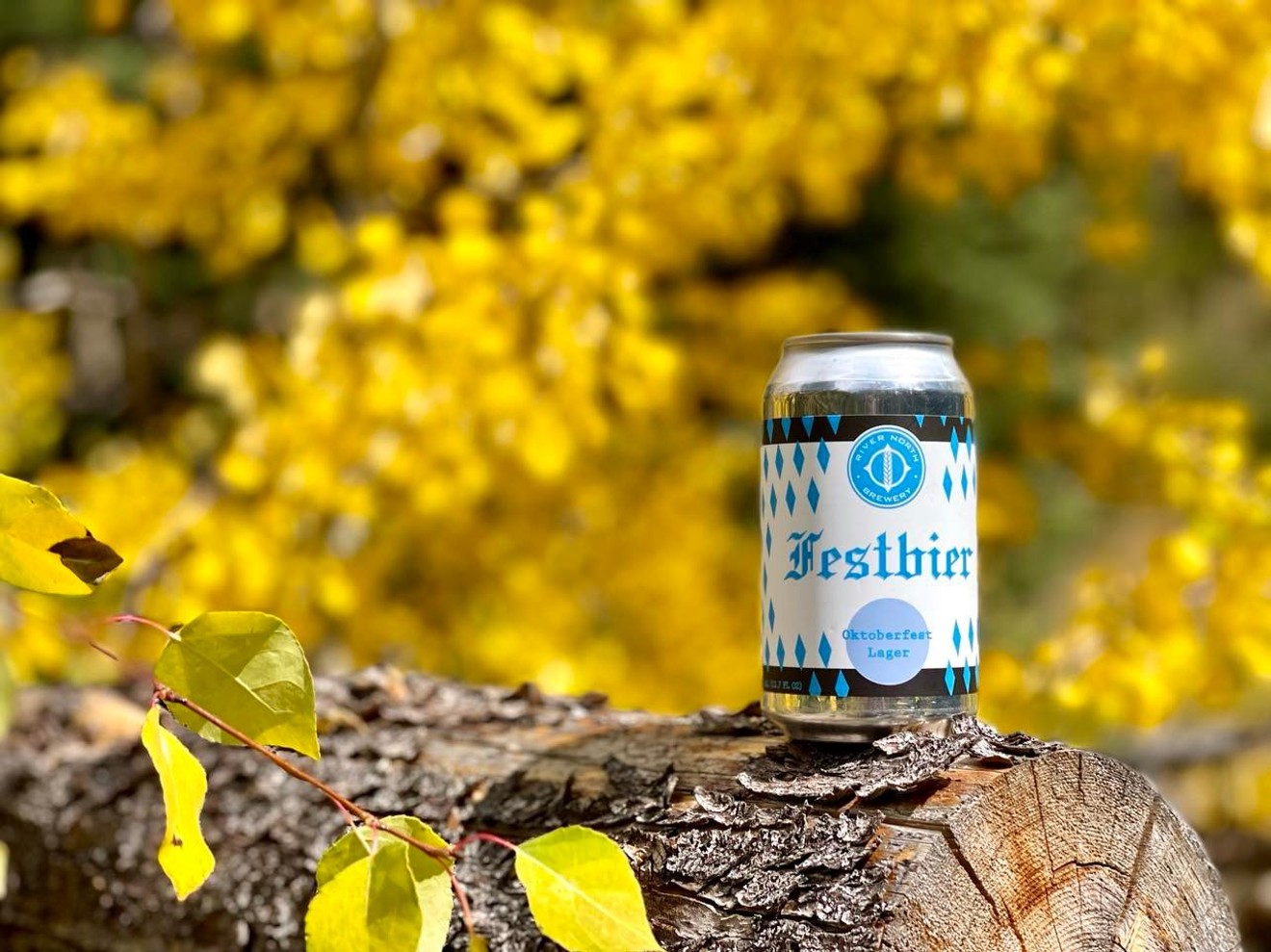 River North's Festbier is out now. River North Brewery
It's that time of year again, when the weather could hit 90 degrees or threaten to freeze (and often both), and hordes of German Oktoberfest beers line the shelves of your local liquor stores and Costcos.

In prior years, it would've been wise to stock up on many of those German imports. This year, though, there are two reasons to go local instead: 1) The German beers are being brewed earlier than ever, in order to logistically make it overseas while taking into account increased shipping challenges. This causes more of those beers to be less fresh and vibrant, or, in the worst case, a shell of what they were meant to taste like during their peak. 2) Local breweries are brewing these beer styles more authentically, with better ingredients that result in a higher quality than ever before. Go local this year and you'll be rewarded with fresh lager.

This list is separated into the two main styles of Oktoberfest beer. Märzen-style is the Oktoberfest style that most people are familiar with. The amber-colored lager is rich in flavor but easy to drink. The best of these have a great malt complexity and sometimes a touch of toast, but are fermented clean, with a dry finish that invites you to take another sip.

Festbier style is a pale lager that is similarly dry and drinkable, but usually comes in with a touch more hop character and slightly less malt richness and body. Both beers are traditionally around 5.8 to 6.3 percent ABV, though you'll see more variation from local breweries.

Festbier took over as the primary beer being served at Munich's Oktoberfest around 1990; up until that point, you could still find Märzen at the fest. Nevertheless, Märzen remains the more popular choice throughout the United States. In recent years, however, more and more festbier versions are being brewed. More breweries are also appropriately labeling these beers today, too, though you'll still find beers simply labeled "Oktoberfest." If you cannot find information on the color of the beers (amber being a dead ringer for Märzen), you can usually assume that a simple "Oktoberfest" label means Märzen, not festbier. Bierstadt Lagerhaus
2875 Blake Street
While you'll see many of the other beers in this list on tap now, Bierstadt is one of the breweries in Denver that eschews sales for tradition, something the imported German beers don't even do in the U.S. Bierstadt releases its Oktoberfest beer every year at the traditional time of noon on the second-to-last Saturday in September. The Märzen-style beer taps at noon on September 17, along with a huge, all-day celebration that includes axe throwing, stein hoisting, polka, Hammerschlagen and music. This Märzen is one of the best you'll find, consistent year to year as a rich but quaffable beer, perfect for drinking mug after mug. The brewery is selling a special Oktoberfest bundle as well. For $65, drinkers get two mugs, four event tokens good for any lager, a four-pack of Oktoberfest to take home, an Oktoberfest hat and two bottles of water. With an all-day bash like this, those two water bottles will be quite valuable.

Copper Kettle Brewing
1338 South Valentia
Oktoberfest Lager from Copper Kettle is rich and malty with a touch of sweetness. The beer is fairly sessionable at just 5.5 percent ABV.

Epic Brewing
3001 Walnut Street
Epic's Munich Mayhem Märzen Lager is a 5 percent ABV offering brewed with pilsner and crystal malts and hopped with Tettnanger and Saaz hops. The beer was a hit last year, so it's being brought back for an encore.

Fiction is celebrating Oktoberfest September 17.
Fiction Beer Company
Fiction Beer Company
7101 East Colfax Avenue
Fiction is having an Oktoberfest event on September 17, which includes a release of MAV Märzen on draft and in 16-ounce cans. With live music from 5 to 7 p.m. featuring Some Sweet Day, as well as stein-holding and -chugging contests and a keg squatting contest, whether you're participating or observing, the event is sure to be a blast.

Great Divide Brewing
Various locations
Hoss Oktoberfest Lager clocks in at 6.2 percent ABV. The brewery notes that the beer is rich, with layered malt notes and hints of cherry and dark fruits. The twist on this beer is that it contains rye, an unusual ingredient for the style, which adds subtle notes of dry earth and spice to the mix. Porch Drinking awarded Hoss Best in Show along with two other beers in a 2021 blind tasting.

Green Mountain Beer
2585 South Lewis Way, Lakewood
Green Mountain's offering is malty and slightly sweet, with a generous amount of hops. The Oktoberfest is also cold-lagered for over eight weeks.

Holidaily Brewing
5370 Greenwood Plaza Boulevard, Greenwood Village
801 Brickyard Circle, Golden
Holidaily has the highest-ABV offering on this list at a whopping 7.2 percent. Its Oktoberfest is malty and refreshing, with just a hint of caramel sweetness coupled with a light biscuity note in the aroma and taste before finishing dry. This gluten-free beer will be featured at Holidaily's Oktoberfest celebration at its Golden location on September 17. Gluten-free sausages, brats and soft pretzels will be available, as well as music, cornhole and a stein-holding competition.

Joyride Brewing
2501 Sheridan Boulevard, Edgewater
Rogtoberfest is named after Joyride's beloved mascot, Roger the Elephant. High-quality German Munich malt combined with a restrained use of hops results in a beer that really follows the traditional track. And at 5.5 percent ABV, you can have a few.

LUKI Brewery
14715 West 64th Avenue, Arvada
LUKI brewed its In Like a Lion all the way back in March. The brewery uses a handful of German malts, as well as Hallertau Mittelfrüh hops. LUKI will hold its Oktoberfest celebration from September 17 to October 3. Many activities are happening throughout the celebration, including polka music, stein-holding competitions, costume contests, Bavarian pretzels from XLVII's bakery, and a special 1-liter tankard that you can purchase and refill for a special price.

New Image Brewing
9505 West 44th Avenue, Wheat Ridge
5622 Yukon Street, Arvada
New Image is hosting Small-Tober Fest at its Wheat Ridge taproom on Saturday, October 1. The namesake beer will be featured, brewed with malts from local maltster Troubadour Maltings and just 3.5 percent ABV — perfect for kicking back and socializing without overindulgence. The brewery will offer lager service, with $3 small pours in a special glass, or $20 for the glass and four pours, along with live music and food specials. The Post
Various Locations
This Oktoberfest is a 5.6-percent ABV beer from almost 100 percent Munich and Vienna malts. Limited-edition steins are available to purchase when the beer taps on September 16.

Sanitas Brewing
3550 Frontier Avenue, Boulder
Sanitas has a higher alcohol take on the style; at 7 percent ABV, its Munich Lager has bready aromas and hearty malts with a light hop character.

WeldWerks Brewing
508 8th Avenue, Greeley
WeldWerks has Märzen, a 5.9 percent ABV beer that is light in body and "ridiculously crushable," the brewery says. The beer pours a dark amber hue and has a malty, nutty quality to it.

Westbound and Down Brewing
Various locations
Simply dubbed "Oktoberfest," Westbound and Down's version is very traditional, with rich malt aromas and flavors of fresh toasted bread and brown biscuit, all held together with a clean hop bitterness. It clocks in at 5.8 percent ABV.

Wynkoop Brewing
1634 18th Street
The OG Colorado brewery has Fest Friends Forever tapping on September 15, an Oktoberfest on the lower-alcohol side, at just 5 percent ABV. With German specialty malts and hops, this beer has the classic flavors one would expect from the style.

Beyond the Mountain Brewing
6035 Longbow Drive, Boulder
At 5.7 percent ABV, Festbier has a rich, toasted bready body with a hint of sweetness on the finish.

Call to Arms Brewing
4526 Tennyson Street
CTA has a unique take on Oktoberfest, with Seshtoberfest, a lighter, more sessionable interpretation of festbier at 4 percent ABV. With a biscuity malt backbone and just a hint of caramel, Seshtoberfest finishes bright and crisp with a touch of hops.

Cerebral Brewing
1477 Monroe Street
Cerebral created a paler version of a festbier-style brew with a blend of pilsner, Munich and Vienna malts. It will release on September 22 and is made with Hallertau Mittelfrüh hops providing a touch of floral and woodsy aromatics. The only barrel-aged offering on the list, Cerebral lagered this beer in chardonnay barrels for five weeks.

Horse & Dragon Brewing
124 Racquette Drive, Fort Collins
Horse & Dragon's Festbier is made with grains that are 100 percent from Colorado maltster Root Shoot Malting. Featuring Munich, Pilsner and Vienna malts, along with Saaz and Mandarina Bavaria hops, Festbier is light-bodied, with biscuity notes and a touch of lemon on the finish.

River North Brewery
6021 North Washington Street
3400 Blake Street
River North was one of the first breweries in Colorado to make the pale festbier style of beer. It clocks in at 5.5 percent ABV and uses all German malts, hops and yeast to create a delicious and complex brew.

Upslope Brewing
1898 South Flatiron Court, Boulder
1501 Lee Hill Drive, Boulder
Upslope's 5.5 percent-ABV Festbier features Leopold Brothers's floor-malted pilsner malt, as well as German Hallertauer Mittelfrüh hops. The brewery's description includes fresh-baked bread on the nose followed by a light herbaceous hop character and smooth finish.
KEEP WESTWORD FREE... Since we started Westword, it has been defined as the free, independent voice of Denver, and we'd like to keep it that way. With local media under siege, it's more important than ever for us to rally support behind funding our local journalism. You can help by participating in our "I Support" program, allowing us to keep offering readers access to our incisive coverage of local news, food and culture with no paywalls.
Make a one-time donation today for as little as $1.