Digging Through the Trash: Blue Sparrow Coffee Isn't Afraid to Get Dirty for Sustainability Blue Sparrow Coffee
"When we started this journey, it was a mess," says Blue Sparrow Coffee co-founder Jeffrey Knott — and he means that both literally and figuratively. Two years ago, Blue Sparrow, which has two locations (3070 Blake Street and 1615 Platte Street), released its first Equity Report, which included data about its employee demographics, wages, benefits and the company's community impact.

The now-annual report, which will be updated once again mid-summer, provides a transparent look inside the company and is a way for it to hold itself accountable.

But along with prioritizing its employees, Blue Sparrow wanted to do more regarding sustainability and understanding the environmental impact of its business. That began with a single-use cup initiative that launched on January 1. "We read up on consumer behaviors and discovered that charging for single-use cups instead of discounting reusable cups is proven to increase reusables by 126.8 percent in some scenarios," Blue Sparrow says on its website.

Blue Sparrow Coffee
It now charges $0.10 per single-use cup — an approach that coffee giant Starbucks is also testing this year. The full amount of that fee goes into a sustainability fund that the company uses for projects it wouldn't have been able to undertake otherwise, such as installing more efficient HVAC units and increasing composting. "We are able to use less and reinvest from those that do choose to pay the fee," Knott notes.

Blue Sparrow also began working on a sustainability report in order to more fully understand the environmental impact of its business and create goals to guide its next steps. "Most of us have lived our lives like this for a long time," says Knott, who has been a vegetarian for nearly a decade. "Our team is really, really excited."

So excited, in fact, that when the idea to put together the sustainability report came up, there were volunteers ready to dig in and count trash — particularly Sara Van Hatten, the sustainability analyst for Blue Sparrow's parent company, Mainspring.

After a year of work, the report was released on April 4; it includes a design and storytelling element from Philip Hua-Pham, Mainspring's brand experience manager. The web page with the report data also has a winding map that shows the "hectic," as Knott calls it, process the team went through to put this project together. "What we've accomplished, really, is that we've got a lot of baseline info now." 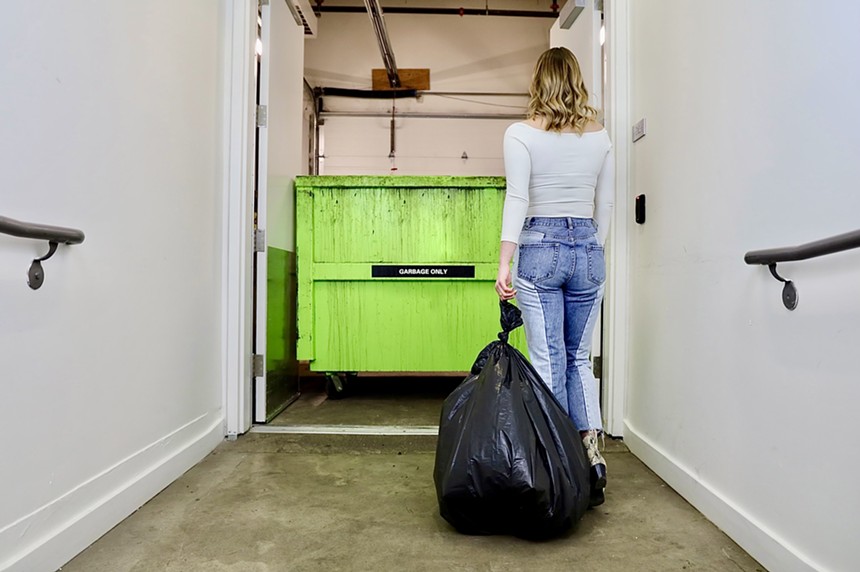 Blue Sparrow Coffee
The data is broken down into waste, energy and water. "It's impossibly hard to get good data on energy and water," Knott admits. "Our goal for next year is to get better data." For now, the focus is on waste. What the team discovered while digging through the trash was that "so much that should be in the recycle bin isn't, and vice versa."

To combat that problem, Blue Sparrow changed its offerings, moving from 80 percent of its customer-facing paper goods being recyclable or compostable to 100 percent. It's also taking a swing at "sustainability" itself. "We stamped the cups with 'Sustainability is dead,'" Knott explains. "The best way I can describe it is just that the word 'sustainable' — it's such a weak word. If you're in a relationship and someone asks how it's going, the last word you want to use is it's 'sustainable.' We want to do better than that. Our goal isn't to do good enough. We want to be net positive."

The goals for this year include working with Scraps Mile High to compost 100 percent of coffee grounds at both locations and continuing to reduce waste contamination by making sure recyclables actually make it to a recycling center. "These are things that we care about, and we're going to hold ourselves publicly accountable," Knott notes.

The sustainability report will be updated annually, too. "We went from quietly caring and doing our own thing to now. It's playing with fire a little bit. We could get accused of greenwashing for publicity," Knott acknowledges. "But hopefully people will see over time that we're really invested and will be tracking these changes over years. ... It's that important."
KEEP WESTWORD FREE... Since we started Westword, it has been defined as the free, independent voice of Denver, and we'd like to keep it that way. With local media under siege, it's more important than ever for us to rally support behind funding our local journalism. You can help by participating in our "I Support" program, allowing us to keep offering readers access to our incisive coverage of local news, food and culture with no paywalls.
Make a one-time donation today for as little as $1.