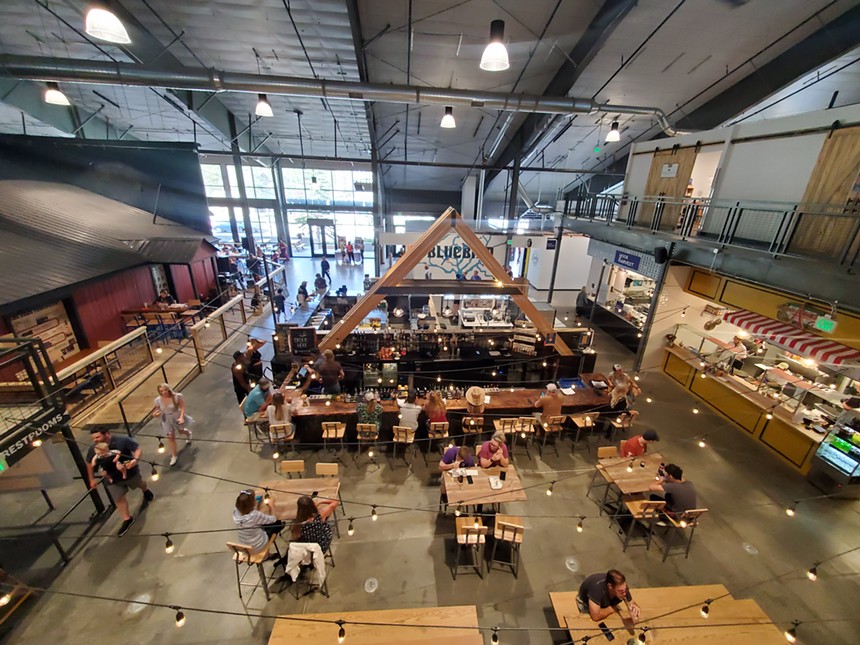 The Mighty Bar is at the center of the action at Bluebird Market.
Molly Martin
What we saw: Silverthorne is known mostly as that stop off Interstate 70 where you can shop the outlet stores and grab a drink while you wait for traffic to die down. With Dillon Reservoir nearby and five ski areas less than twenty miles away, it's often a pit stop on the way to other destinations — but some new additions are aimed at making this mountain town a place where travelers will want to stay a while.

The 4th Street Crossing development, a public-private partnership between the Town of Silverthorne and co-developer Milender White, bills itself as the "new heart of downtown Silverthorne." Once complete, it will include 72 luxury condos as well as apartments for workforce housing. Two key parts of the development debuted in January: Hotel Indigo (the brand's first mountainside location in the country, complete with a pool, complimentary happy hour and on-site restaurant, Kúcu Tequila Bistro) and Bluebird Market.

While it officially opened over six months ago, the food hall celebrated its grand opening on July 22 with a ribbon-cutting ceremony followed by a weekend of events to formally introduce the dining destination to locals and tourists alike. With all eleven food vendors now up and running, spirits were high as a small crowd gathered to mark the occasion.

"It seems like it's been a long time in the making — over five years, actually," noted Erin Young, a councilmember for the Town of Silverthorne, adding that the area where the food hall sits was once a space where dead semi-trucks were parked before they were towed away.  "Everything that's here is a great new amenity to the town," she continued. Mighty Burger is one of eleven food concepts now open at Bluebird Market.
Molly Martin
"With these mixed-use developments, it's an ecosystem," said Scott Vollmer, Milender White's director of property operations. The overall hope is that the food-hall businesses, all of which are independently owned, will seamlessly integrate themselves in the community, which has already begun happening at events like the town's First Friday celebrations.

The food hall itself is centered around the Mighty Hospitality Group's Mighty Bar, which is run by the same team behind food concepts Hook & Harvest (which specializes in poke bowls) and Mighty Burger, which got its start as a fixture at Denver Beer Company's Arvada location, serving burgers out of a vintage Airstream trailer.

The other food options include Nomad Coffee House (which opens at 7 a.m.); Crêpes à la Cart from Breckenridge; Chimayo Grill, which operates a popular outpost in Dillon; Colorado Marketplace and Bakery, which is run by Silverthorne locals; and Don’t Call Me Charlie’s Ice Cream. Three concepts that also have locations in Edgewater Public Market round out the lineup: Lazo Empanadas, Lucky Bird and Tilford’s Wood Fired Pizza.

A second level, which overlooks the hall, features an arcade as well as spaces for retail shops, which are expected to be added in the coming months. What surprised us: The way historic buildings have been incorporated into the development. "Thank you for preserving a little bit of our history, recognizing that Summit [County] is a fun place and wants to hold on to its roots a bit," Young said of Milender White.

But "a little bit" is a bit of an understatement. Sitting between Bluebird Market and Hotel Indigo is The Mint, an old depot building turned restaurant with a long history of new beginnings: It originally opened in 1862 in a mining town known as Kokomo (no relation to the Beach Boys song that anyone knows of) and was moved from there to Frisco, to the part of Dillon that now sits under the lake, and to its current location in Silverthorne.

The contrast between the shiny new buildings and the Mint's throwback exterior is striking. The 4th Street Crossing development will also preserve the old 4th Street Fire Station, which will be converted into a brewpub. But the most striking save was of the Old Dillon Inn, which Bluebird Market now engulfs. The food hall was built around the Old Dillon Inn, which will reopen in 2023.
Molly Martin

The building was part of the original town of Dillon and was moved when the reservoir was built, opening as the Old Dillon Inn in 1973. Known to locals as the place that served only hot dogs and beer after the restaurant closed at 10 p.m., it shut down for good in 2007 and sat, untouched, for nearly fifteen years.

Now it's getting ready to welcome hungry and thirsty patrons once again. James Samara of the Mighty Hospitality Group will be heading up the reboot. The plans are for it to operate "as a bar, with the saloon feel, and barbecue is predominantly the menu focus," Vollmer said.

On the food hall's grand-opening day, the Old Dillon Inn's doors remained closed, but a live band playing on the wooden deck surrounding it brought an energetic preview of the kind of fun that's in store when it makes its comeback in early 2023.

"That building is one of the coolest parts of this project," Vollmer added. And we agree.
KEEP WESTWORD FREE... Since we started Westword, it has been defined as the free, independent voice of Denver, and we'd like to keep it that way. With local media under siege, it's more important than ever for us to rally support behind funding our local journalism. You can help by participating in our "I Support" program, allowing us to keep offering readers access to our incisive coverage of local news, food and culture with no paywalls.
Make a one-time donation today for as little as $1.