What a Restaurant Wellness Director Really Does

Qiana Torres Flores wants to hear about your problems. Really. Courtesy Qiana Torres Flores
Qiana Torres Flores works for restaurateur Frank Bonanno. She also has a master's degree in counseling with a concentration in multicultural clinical mental health. Those aren't necessarily credentials you'd expect from a restaurant employee, but when Bonanno Concepts, the group behind ten Denver eateries turning out everything from tacos (Denver Milk Market) to tasting menus (Mizuna) decided to create the job of wellness director for its over 400 employees, Flores, who had been working as a community mental health counselor serving low- and no-income clients, was intrigued.

"It was definitely that it was something new," she says about why the job appealed to her. The position is unusual in the hospitality industry; while employee benefits are slowly becoming more common in bars and restaurants, many independent restaurants — especially those that aren't part of a restaurant group — don't offer benefits like health insurance and paid time off. And even the most idealistic of bosses don't generally provide on-staff counselors (Ted Lasso notwithstanding). Flores's hiring garnered a spate of media attention earlier this year, and she's spent much of her ten months on the job simply defining her role.

The novelty wasn't the only reason Flores was interested in the position, though: "My own personal passion for working in mental health is offering accessible and approachable services for people who don't usually get them, either for socio-economic or cultural reasons," she says, noting that many un- or underinsured clients have never had positive mental health care experiences — either because they've never been able to obtain care at all, or they've had awful experiences if they did see a provider. "It's very clear to me that there are many tradesmen who are woefully underserved," Flores explains. "It's a good fit as far as my mission goes." 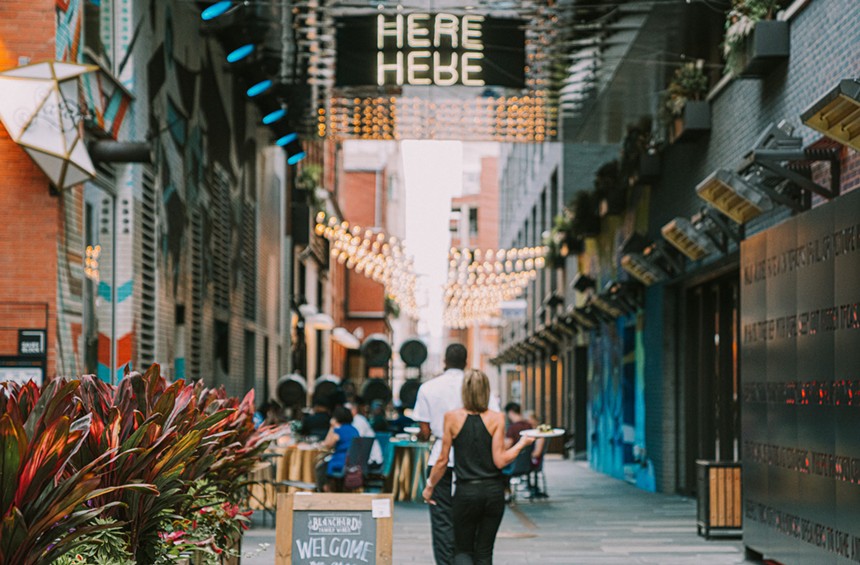 Bonanno Concepts is hoping to help Milk Market employees with mental health care that's more effective than crying in the alley after shifts.
Jeff Fierberg
When she was hired by Bonanno Concepts, Flores wasn't entirely a stranger to the hospitality industry. Her first "big-girl job," as she puts it, was thanks to an older sister, who was the food and beverage manager at a high-end hotel. She worked for her sister through high school, and during her college years, she returned to the gig over breaks. After obtaining an undergraduate degree in political science, she worked for the National Conference of State Legislatures for seven years before deciding that the "churn of government," as she puts it, was too slow for her; she then return to school to obtain her master's degree.

The restaurant industry is staggeringly fast paced — infinitely more so than government. "I'm pretty darn busy," Flores says. "The biggest thing I do is provide short-term counseling." Bonanno Concepts' employees get three to five free and confidential individual counseling sessions with Flores to help them resolve personal and mental health issues. "If it doesn’t get resolved," she says, "I take another three to five sessions to help them get hooked up with additional care."

"It's very hands-on," she continues, adding that she's not just handing out phone numbers of therapists or copies of Psychology Today. She puts in time with clients to help them determine what they are looking for in a therapist, and refers them to clinicians in her professional networks. As anyone who's worked in a restaurant knows, schedules, staffing and volume can change on a dime, and Flores says she's had weeks when she's had ten appointments and just a few with none. But since she started seeing clients last October, she's had 92 individual appointments with 42 different clients.

Flores is part of Bonanno Concepts' human resources department (or "people team," as it's referred to internally), and she acknowledges that it's challenging to square her role as counselor to restaurant workers when she's also an employee — and is being paid by the same organization that may be causing her clients distress. That was a major topic of discussion early on in the interview process. "They said, 'This is not a stooge position. This isn’t us putting out a little spy,'" she recalls.

Olivia Moffett, director of marketing for Bonanno Concepts, who sat in on our interview with Flores, chimes in, "Qiana is here for our employees and their well-being. ... I wouldn’t know if someone came to Qiana."

Flores says she wouldn't have taken on the role if she felt it compromised her professional ethics. "I still have to stay true to my own ethical code. ... For the first six months, that was my mission: to determine the lines between what's clinical [practice and ethics] and HR. I made sure to onboard a clinical consultant, especially because there's no other model for this job."

To build trust with her clients, Flores is candid. "Right after I talk about confidentiality and the limits of confidentiality, I say, 'I want to let you know my allegiance is to you.' I don't pretend it's not a weird thing." She's recently completed a policy manual, which lays out best practices. As an example, she says, "I can't see my people-team folks for counseling," which would be a clear conflict of interest. "It’s been a journey trying to figure out the ethical part...but HIPAA is still HIPAA."

Because work of any kind — let alone a high-stress restaurant job — has equal potential to make you feel productive and valued or turn you into a seething ball of resentment and anxiety, we asked how Flores would address an employee who came to her distressed about the conditions of their job. "One of the things I coach on and talk about personally and professionally is communication, and how we use our existing paths of support to get our needs met," she replies. While almost everyone who's sought out Flores's services has visited her of their own accord (as opposed to being referred by managers), she knows there will always be some employees who just won't feel comfortable seeing her. "And that sucks," she admits.

High-end dining can come with high stress levels for restaurant workers.
Courtesy of Bonanno Concepts
Moffett concurs that "all we can do is try to be unwavering" in support of employees. "There’s not a lot of consistency [in the restaurant world]," she notes. "We’re trying to be consistent." She points out that the restaurant group surveyed its staff about workplace priorities before creating the wellness director position, and the number-one request was for mental health services. She also notes that Bonanno's restaurants are currently 98 percent staffed. (Admittedly, that's an impressive number in a world where "Now Hiring" and "Short staffed. Please be patient!" signs are commonplace in restaurant windows across the nation.) "We attribute a lot of that to Qiana and this environment," Moffett continues.

In addition to individual counseling, Flores visits every Bonanno Concepts location monthly for what she calls "Mindful Minutes." She coaches employees and managers in a variety of mindfulness and self-soothing techniques, drawing from traditions such as Buddhist meditation as well as therapeutic practices like bilateral stimulation. These group sessions are a favorite, because, says Flores, she finds it especially meaningful for workers to experience these practices with their teams. She's also provided a series of company-wide training sessions designed to help managers not only identify, but know what actions to take if their employees are going through an emotional crisis. "It was clear a lot of our managers actually did know a lot of this content," Flores says. "They didn’t have the words for it, but they would recognize, 'Oh, that person's a little off today.'"

Flores appreciates Bonanno Concepts' willingness to take risks, not only in creating the position, but in being open to ideas and her "pie in the sky" goal of making these services available at restaurants across the Denver metro area. "They are so open to any manner of spaghetti we can throw on the wall," she laughs.

She's up front about what needs to happen next: "It’s going to take more than a clinician of one. We need more subject matter experts; we need folks who understand substance use and peer support. My knowledge [about those] is a mile wide and an inch deep." So she's partnered with Khesed Wellness (a practice offering free and affordable mental health services) and peer-support group CHOW ("They’ve got the magic formula around peer support," she says). "I've not been operating at all in a vacuum," she concludes. "I have to pull in partnerships to make sure this stays sustainable and relevant."
KEEP WESTWORD FREE... Since we started Westword, it has been defined as the free, independent voice of Denver, and we'd like to keep it that way. With local media under siege, it's more important than ever for us to rally support behind funding our local journalism. You can help by participating in our "I Support" program, allowing us to keep offering readers access to our incisive coverage of local news, food and culture with no paywalls.
Make a one-time donation today for as little as $1.