Where to Find the Best Beer-and-Pizza Duos in Denver 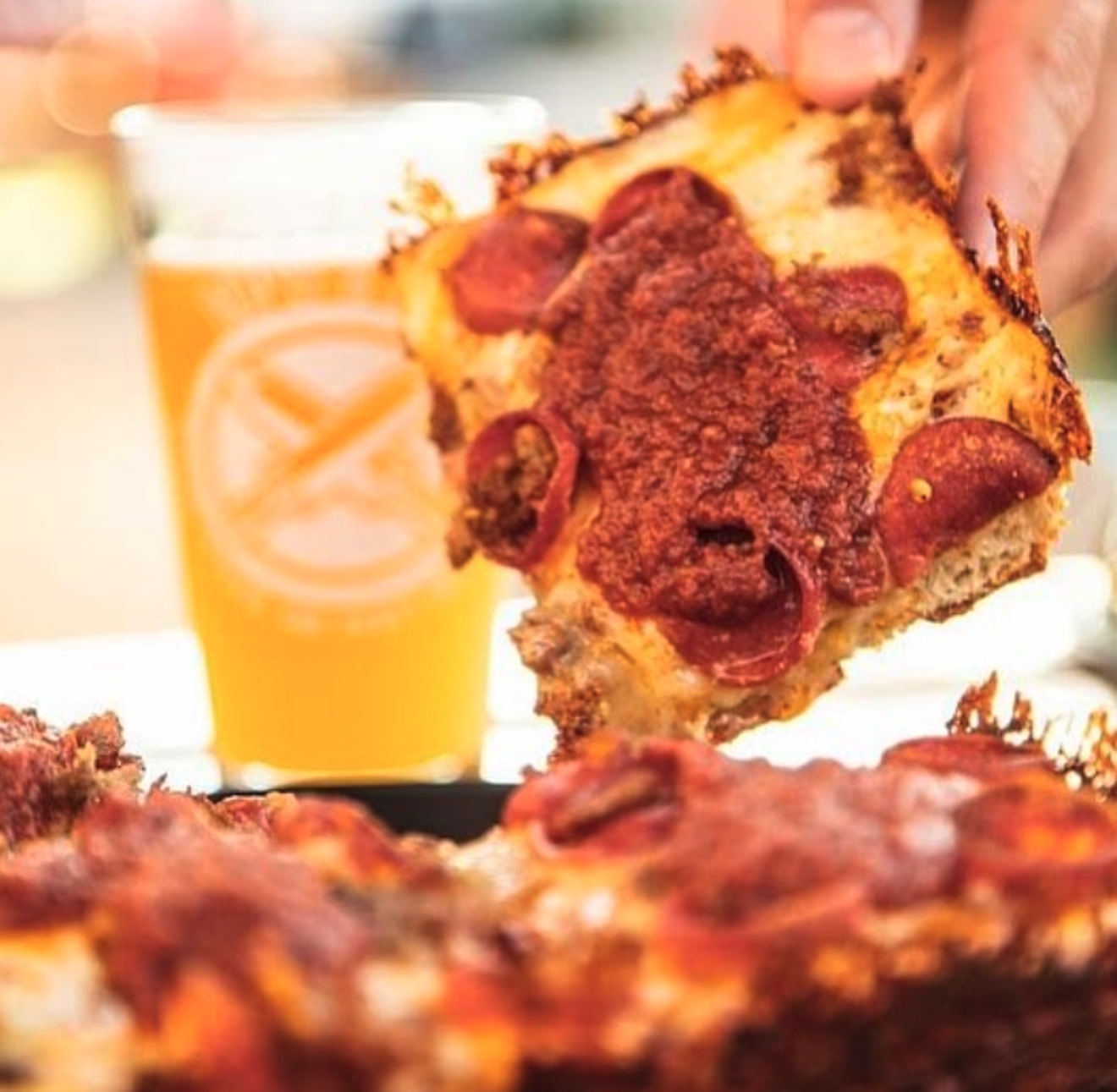 Hops & Pie / Instagram
Pizza and beer are an iconic duo in the culinary world. The two not only pair well together, but also inherently enhance the other. “They’re two things that have a bit of nostalgia and happiness and comfort,” says Drew Watson, who co-owns Hops & Pie, at 3920 Tennyson Street, with his wife, Leah.

The Watsons are originally from the Northeast, where, as Drew puts it, pizza is life. Growing up, he recalls, there was a pizza shop every couple of blocks, so when the two opened their beer-centric business in 2010, scratch-made pizza was the ideal co-star. 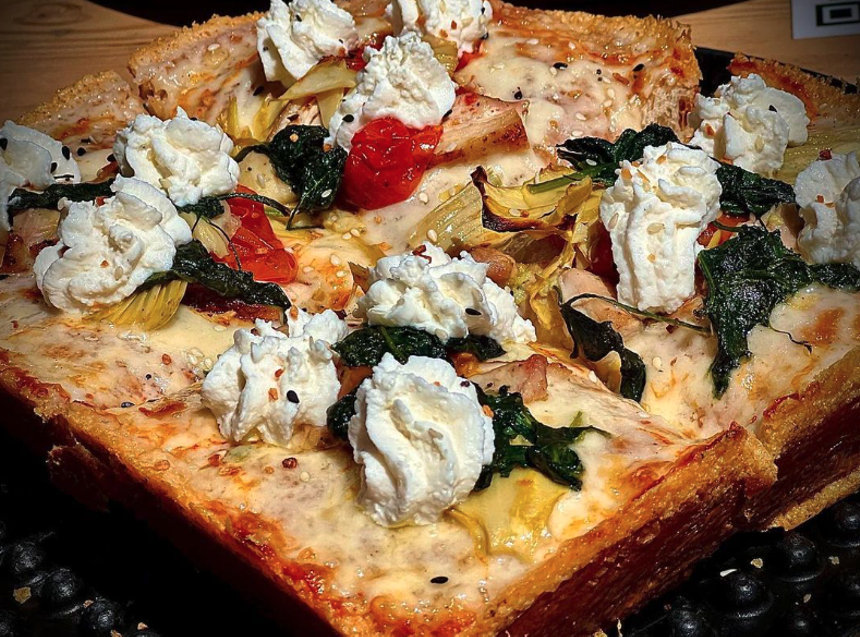 Watson’s go-to pairing is a slice of pepperoni pizza with a West-Coast IPA, because the spiciness of the pepperoni is balanced by the hops and crispness of the beer. “It’s like a melody,” he says.

With a bolder stout, he suggests a pie that will be on the winter menu: beer-braised short ribs and a rich cheese, such as Muenster or provolone, with a touch of baby arugula or watercress added to balance it out. And for a simple slice of cheese, Watson is partial to a pilsner, like Westbound and Down’s Italian Pilsner.

Because they're such a good pair, many breweries opt to make pizza a highlight on the food menu. Here are our picks for the best brewery and pizza combos: 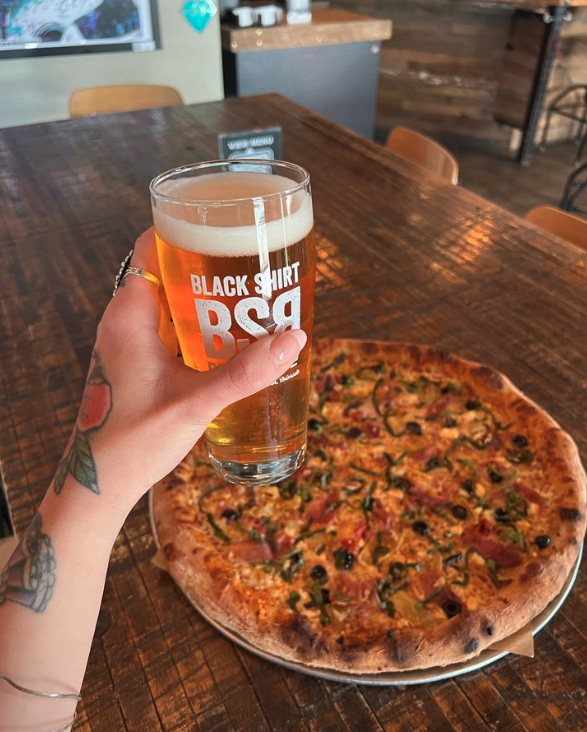 Black Shirt Brewing Co. / Instagram
Black Shirt Brewing Co.
3719 Walnut Street
303-993-2799
blackshirtbrewingco.com
This brewery added a pizza kitchen in 2017, and in January, it was taken over by new owners Jimmy and Karen Dodson. They've largely kept operations the same, including continuing to serve pizza made with dough that uses the spent grain from the brewing process. Black Shirt has over twenty topping options, including cotija cheese, red peppers, green chiles, roasted chicken and cream cheese. In addition to traditional marinara sauce, you can also choose from a base of buffalo sauce, pineapple jalapeño teriyaki, barbecue sauce and garlic olive oil. Create your own, or opt for a specialty pizza like the Live in Pompeii, with a blend of house red sauce and Greek vinaigrette topped with sun dried tomatoes, mozzarella, feta, artichokes, black olives, red onion, prosciutto, garlic and basil. 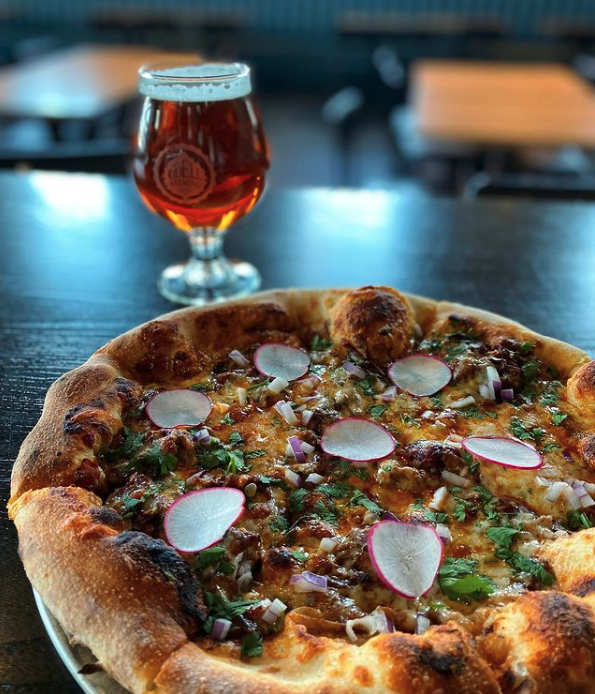 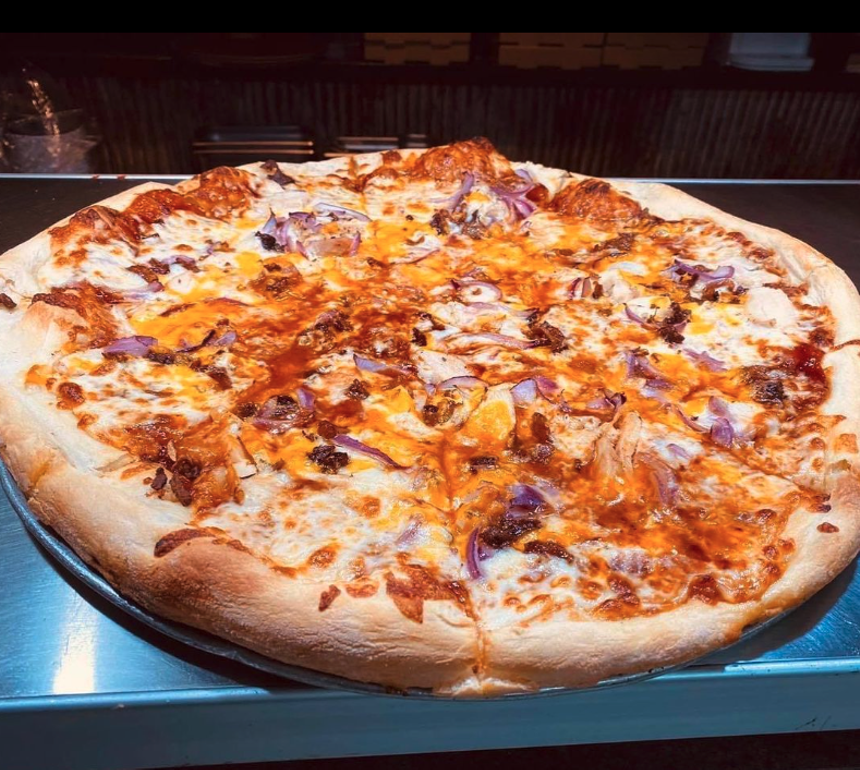 Black Sky Brewery / Instagram
Black Sky Brewery
490 Santa Fe Drive
720-708-5816
blackskybrewing.com
This heavy-metal brewery also serves up creative pizzas with lots of options. Toppings include meatballs, roast beef, blue cheese, banana pepper, tomato and pineapple. It also offers the option to sub vegan cheese, and has a list of other vegan-friendly items, including a version of its Corpse Paint pie with white sauce, garlic, tomato and Italian spices. If you're a cheese lover, though, try the Jalapeño Popper Pizza loaded with bacon plus cream cheese, cheddar and mozzarella. 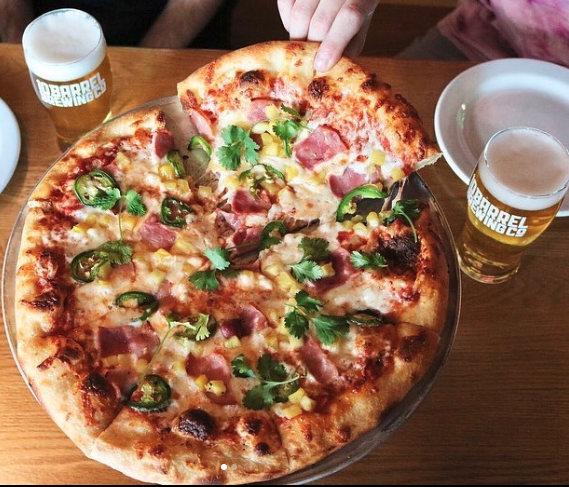 10 Barrel Brewing
2620 Walnut Street
720-573-8992
10barrel.com
Originally founded in Bend, Oregon, in 2006, 10 Barrel was purchased by Anheuser-Busch Inbev in 2013. Its Denver outpost debuted in RiNo in 2016 and includes a kitchen that serves pub fare, with a lineup of 15-inch pies (which are also available on a 10-inch gluten-free crust). Curated pizzas include Mushroom  + Truffle, Buffalo Chicken, and the Fig + Pig, topped with capicola, ricotta, fig caramel, shredded mozzarella and arugula. 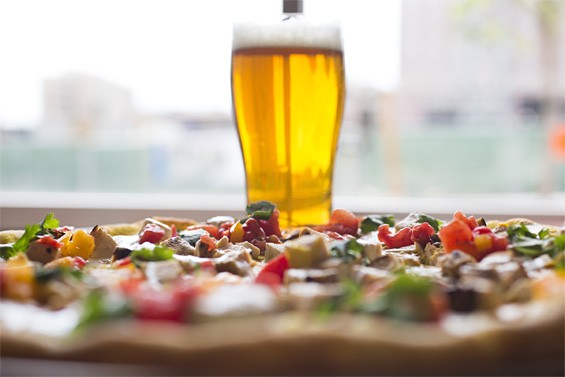 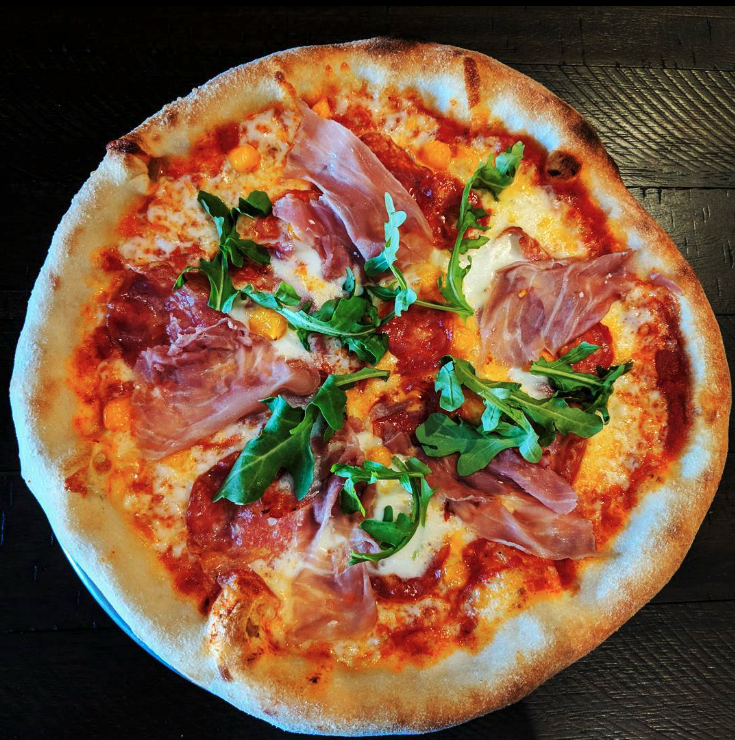 Echo Brewing / Instagram
Echo Brewing and Pizzeria
600 Briggs Street, Erie
720-361-2332
echobrewing.com
In 2014, Echo Brewing opened in a former fire station in Erie. The menu is centered on brick-oven pizzas that start with a dough made from 100 percent Italian Caputo flour, water, yeast and salt that rises overnight. (There is also a gluten-free crust available.) Standouts include the Molto with red sauce, mozzarella, fennel sausage, mushrooms, grape tomatoes and onions; as well as the Isola with San Marzano sauce, capicola, mozzarella and pineapple. There’s a dessert pie, too, made with the house dough stuffed with Nutella and topped with powdered sugar. 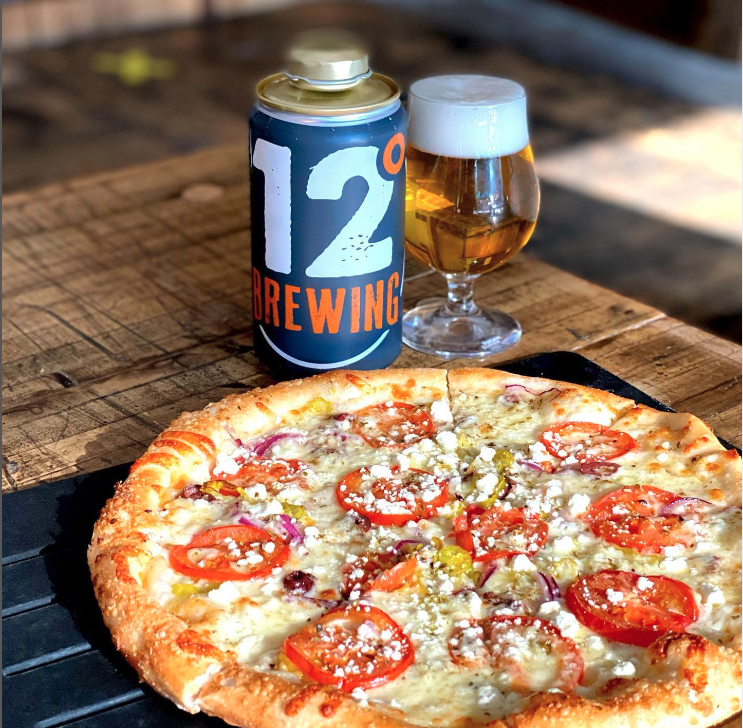 
12 Degree Brewing
820 Main Street, Louisville
720-638-1623
12degree.com
The Belgium-inspired 12 Degree Brewing debuted in 2013 in a former temperance hall — a place people once went specifically to not drink. Now plenty of beers are served in the space, alongside frites and thin-crust pies in options like spinach and garlic, pesto and margherita. Alongside menu standards like the Humongi Fungi with three types of mushrooms plus white truffle oil and mozzarella, you’ll also find seasonal specials, like the Peacha Pie with fresh Palisade peaches, honey, crème fraîche and mozzarella.
click to enlarge 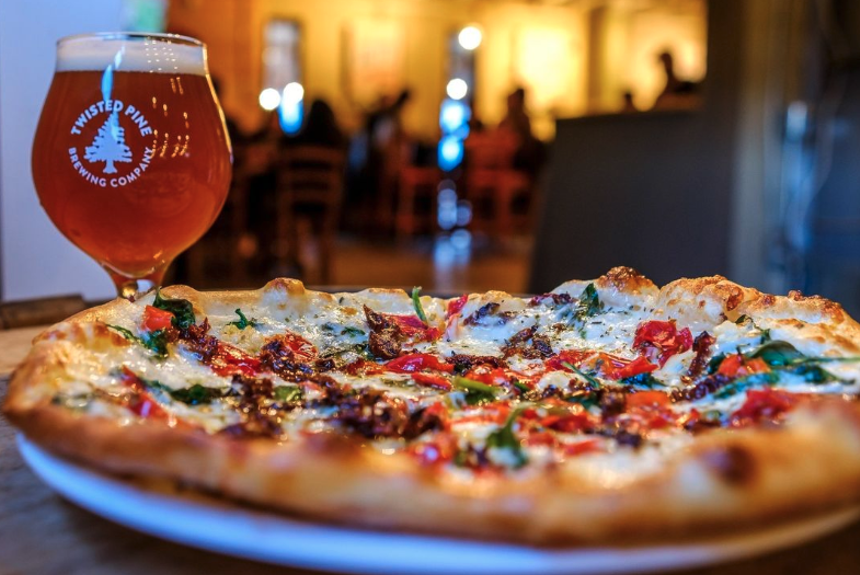 Twisted Pine Brewing Company
3201 Walnut Street, Boulder
303-786-9270
twistedpinebrewing.com
Twisted Pine has been a Boulder go-to for craft beer since 1995. The menu includes shareable plates and wings along with pizzas that start with a base layer of beer-infused marinara. Beer-braised chicken also makes an appearance on three of the pies (the CBR and both the Buffalo and BBQ Chicken Pizzas). Gluten-free crust is available, too, as is the Vegan Herbivore pie, topped with housemade hummus, spinach, mushrooms, sliced onions and roma tomato. 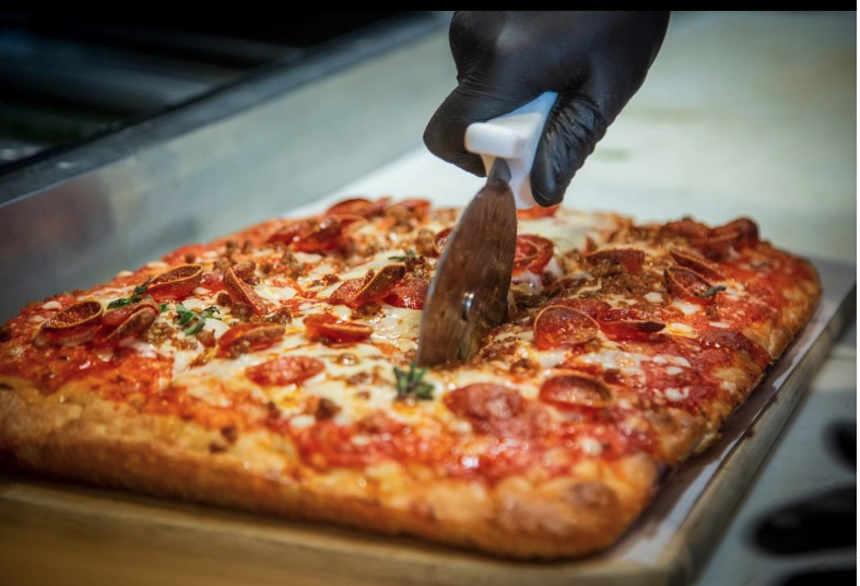 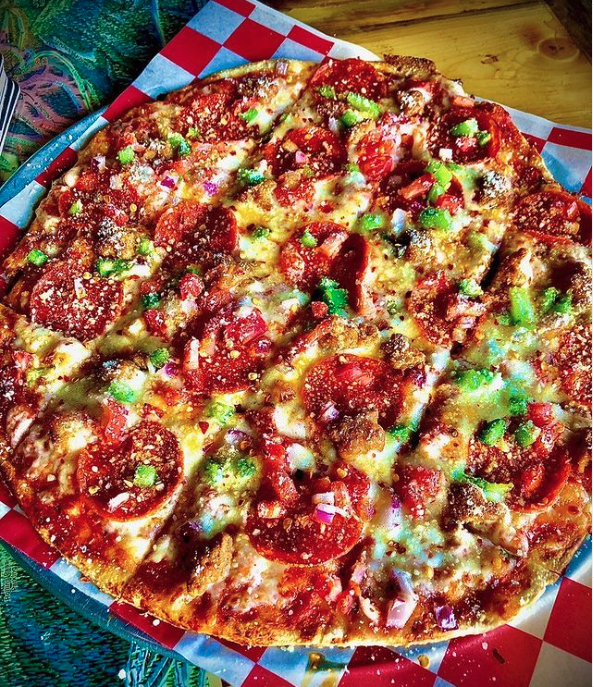 Downhill Brewing / Instagram
Downhill Brewing
18921 Plaza Drive, Parker
303-805-2739
downhillbrews.com
Skier Jake Minturn and snowboarder Doug Hyndman met following an accidental collision on the slopes. But that incident led to friendship, and in 2017, the two bought Parker's Elk Mountain Brewing and re-branded it as Downhill Brewing. Along with beers like cucumber sour Fresh AF and the hop-heavy Murder Hornet, it offers nine specialty pies plus a pizza of the month and a build-your-own option. Choices range from the Greek Goddess, with a trio of olives, pine nut basil pesto and artichoke hearts, to the Usual Suspects, with red sauce, mozzarella, pepperoni, Polidori sausage, green pepper, red onion and black olives. 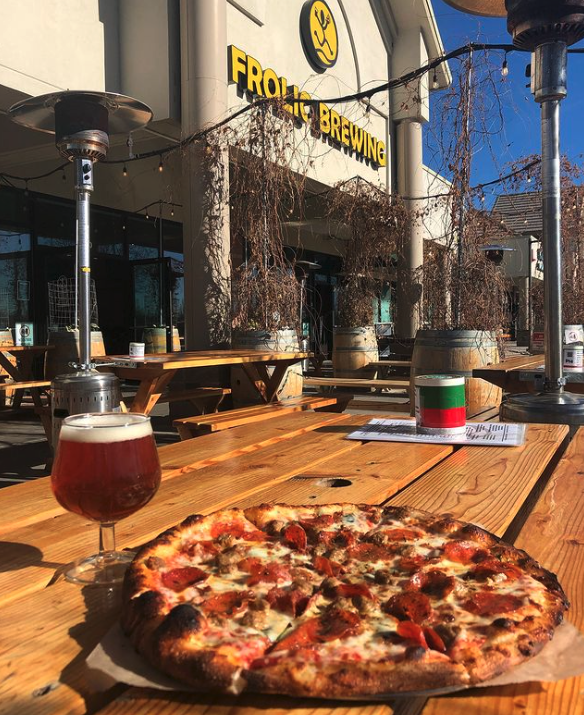 Frolic Brewing Pizza / Instagram
Frolic Brewing
12910 Zuni Street, Westminster
303-993-7443
frolicbrewing.com
This veteran-owned and -operated brewpub boats a large, dog-friendly patio. Everything on its menu, from nachos to omelets, is made in its pizza ovens, which also churn out a lineup of 12-inch pies. Alongside cheese, pepperoni and supreme options, you'll find some out-of-the-box selections, like the Frito Pie topped with chili, spinach, cheddar Jack cheese, onions, jalapeños and crumbled Fritos. There are also three dessert pizzas available for a sweet treat: churro, s’more and berry cream.
KEEP WESTWORD FREE... Since we started Westword, it has been defined as the free, independent voice of Denver, and we'd like to keep it that way. With local media under siege, it's more important than ever for us to rally support behind funding our local journalism. You can help by participating in our "I Support" program, allowing us to keep offering readers access to our incisive coverage of local news, food and culture with no paywalls.
Make a one-time donation today for as little as $1.
Kristen Kuchar is a Colorado writer covering dining and the beverage industry, including wine, beer, cider and spirits. Her articles have appeared in VinePair, the Beer Connoisseur, Beer Advocate, Craftbeer.com, Zymurgy and more. She has a WSET Level 1 certificate and is a Certified Beer Server by the Cicerone Certification Program.
Follow:
Twitter: @KristenKuchar
Instagram: @kristen_kuchar/