Over the past 24 years, Falling Rock has been a backstop against the ups and downs of the beer world and of a changing city, offering a place of comfort and consistency and really great beer. But for Black and many others, the Bull & Bush, now going on fifty years strong, is the backstop’s backstop.

“It’s almost surreal about Falling Rock,” Erik says. “But it really made me reflect on our fifty years here. As things change and evolve, it’s almost shocking to be able to keep something going for this long.”

Built by twin brothers Dean and Dale Peterson in 1971 on an empty plot of land in Glendale, a tiny town surrounded by Denver, the English pub-style Bull & Bush was passed on to Erik and Dave, Dale’s sons, in 1996, which means that they have now been running the place for almost as long as their dad and uncle did. In 1997, they added a brewery to the pub at 4700 Cherry Creek Drive South. 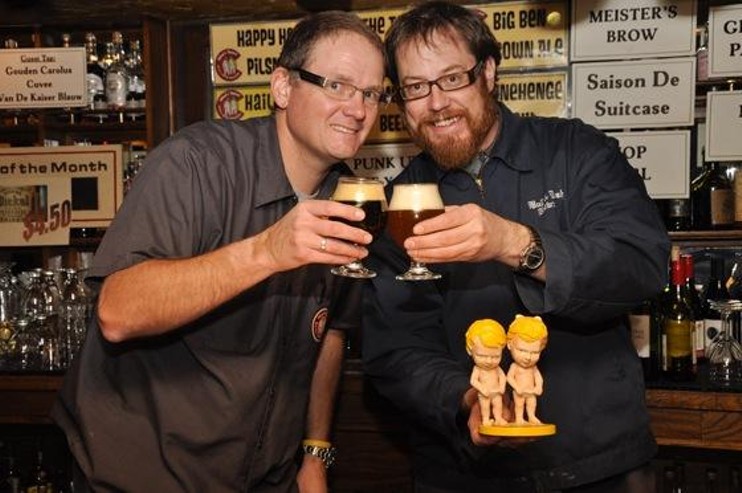 Dave (left) and Erik Peterson of the Bull & Bush.
Bull & Bush Brewery
That same year, Black and his own brother opened Falling Rock in the Ballpark neighborhood, and the two businesses have had a longtime connection and friendship because of their similarities as family-run pubs. Now, as the Bull & Bush preps for its fiftieth-anniversary party in August, the Petersons are counting their blessings.

“What if, at just the right time, just the right people made just the right thing?” Erik asks as a way of helping to explain the pub's longevity. “[Our parents] were able to buy the land, which was crucial,” and they chose a concept that would never go out of style. “English pubs are timeless," he notes. "There are some that have been around in England for 400 years. It meant they didn't have to remodel. I mean, what if this had been a fern bar instead?”

Owning their property also helped Bull & Bush withstand the pandemic restrictions that forced every brewery bar and restaurant to close for at least several weeks, and then struggle through distancing and mask restrictions for over a year. Rather than try to limp through with to-go service, the Petersons shut everything down from March through June 2020 and focused on cleaning and maintenance — including redoing miles of TV and stereo wiring.

But they also expanded their indoor/outdoor beer garden and patios as fall and winter approached. “That saved us,” Erik says. And although it might have been easier to streamline the menu during the pandemic, they chose not to. “People want genuine experiences that are real and tangible," he explains. "We never changed, and I think that was the secret sauce. I tried to make it look like a regular Bull & Bush experience the whole way through.” The Bull & Bush's original sign from 1971.
Bull & Bush Brewery
Of course, that idea of never changing is part of the restaurant’s charm. Your parents ate the same dishes and sat in the same seats thirty years ago where you can now, Erik points out.

But the Bull & Bush brings in "all walks of life," he adds. In addition to neighbors, the place attracts young couples with kids, singles, big families, businesspeople, grandparents and great-grandparents. In fact, the over-sixty crowd came back first this year, because they were the first to be vaccinated.

"I want to keep doing this for the rest of my life," Erik says. "We're going to do this for as long as people continue to come in. That is a bargain I made with them." He hopes that COVID's restrictions made people appreciate small, independent businesses more, especially the unusual or even "weird and wonderful" spots like Falling Rock and Bull & Bush, and will inspire them "to come check them out and to support the people who live in their community."

Bull & Bush will celebrate its fiftieth anniversary August 5-7 with two nights of live music, beer tappings and food specials. Until then, the pub is tapping a new beer every Friday as part of its 50 Beers for 50 Years countdown.