Artist Joshua Finley puts the finishing touches on his new mural for Cheba Hut during friends-and-family night. Courtesy Cheba Hut
With the opening of its newest sandwich shop at 3990 Central Park Boulevard in Stapleton, Cheba Hut now runs four Denver locations of its pot-themed eateries. That seems like a small number for a Colorado company that's been selling subs for 21 years, but founder Scott Jennings has focused on growing the brand in Fort Collins (where he lives) and beyond Colorado's borders.

Now with 24 stores open in several states and more under construction, Jennings says Cheba Hut is poised for steady, balanced growth that could see the company adding three to five locations a year, both franchised and company-owned. 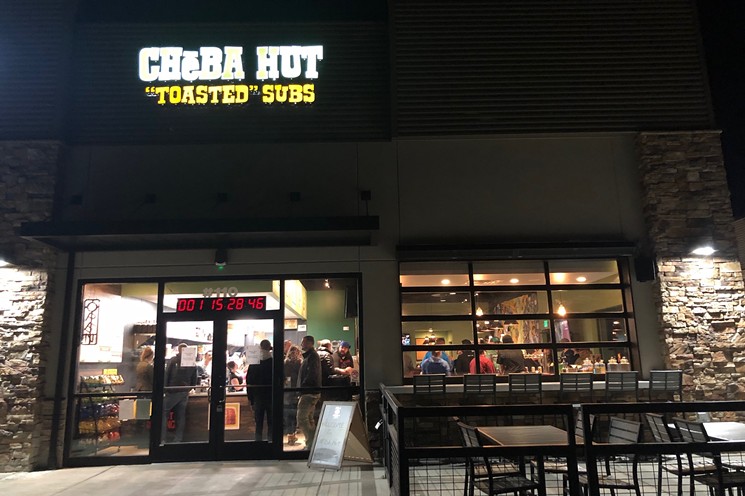 Neighbors line up for sandwiches during a soft opening in Stapleton.
Courtesy Cheba Hut
The new Stapleton Cheba Hut is much like its other Denver siblings; the sign out front promises toasted subs, with the word toasted in quotation marks to emphasize the double entendre. Inside, the menu board displays subs named after cannabis strains, and additional menu items include munchy-friendly snacks like marshmallow cereal bars, Loaded Not'chos (nachos made on a bed of Doritos and drizzled in ranch dressing), and pretzel nuggets. And oddly (for either a sub shop or a cannabis-themed establishment), you can also score a bowl of French onion soup.

Most notable (beyond the toasty subs themselves) is the original artwork that brightens each Cheba Hut. The newest member of the family sports murals by Denver artist Joshua Finley; since the old Stapleton International Airport was located nearby, the murals have an air-travel theme, along with plenty of joints. "We want to keep each store unique," Jennings explains. "This was the first mural [Joshua] has done for us — and it's phenomenal."

Coloradans are pretty comfortable with Cheba Hut's brand of weed humor.
Courtesy Cheba Hut
The other thing that sets each restaurant apart is the "Secret Stash" menu; employees at each Cheba Hut are allowed to come up with a sub based on their preferences as well as input from customers. Jennings points out that it usually takes a new store a few weeks before employees have worked together long enough to create their unique offering.

In addition to Northfield, Cheba Hut has also signed leases in Colorado Springs and Johnstown (at the Loveland/Johnstown exit on I-25). Seth Larson, chief relationship officer for the company, adds that balanced growth is going forward by franchising, with deals recently signed in Atlanta, Austin and Riverside, California. Larson points out that franchise deals are generally for a "three-pack" of stores in new markets.

When Jennings opened the first Cheba Hut in 1998, the pot humor and references were countercultural and subversive, but with the legalization of cannabis in Colorado, the sub shops are just a few of many businesses with pot leaves on their signs. But Jennings isn't worried about being obscured in a cloud of smoke; his goal is to serve good sandwiches before anything else. "We get people jumping on the green wave, but we want it to be a good culture and fit," the founder explains. "Every day, we wake up and think about how we can make the food better."

That said, Jennings and Larson agree that expanding into markets that already have an established marijuana culture isn't necessarily the best path. "It's easier to make a splash in a conservative market," Larson states.

Cheba Hut Stapleton will be open today from 10 a.m. to midnight before settling into regular hours (which could change depending on how late the neighborhood likes to stay out), so you'll be able to score your Panama Red, Kali Mist or Pacific Blue — all sandwiches, of course.
KEEP WESTWORD FREE... Since we started Westword, it has been defined as the free, independent voice of Denver, and we'd like to keep it that way. With local media under siege, it's more important than ever for us to rally support behind funding our local journalism. You can help by participating in our "I Support" program, allowing us to keep offering readers access to our incisive coverage of local news, food and culture with no paywalls.
Make a one-time donation today for as little as $1.