Outside what will soon become Denver's second Cherry Cricket. Mark Antonation
The transformation at 2220 Blake Street is nearly complete: The restaurant that was once a Breckenridge Brewery outpost and that most recently went by the name Breck on Blake will become the second outpost of the Cherry Cricket beginning April 17.

Owner Lee Driscoll says he's been looking to add a second Cherry Cricket since about 2011 but was concerned about how Denver would react. "We were always afraid we wouldn't be able to replicate it — that it would lose the fairy dust," he says. "So we didn't want to cookie-cutter it."

Instead, the new Cricket will focus on delivering the same iconic burgers and other menu items Denver has flocked to for decades, while offering a modern and comfortable dining space loosely divided into several unique sections. "Being honest," Driscoll adds, "if you're starting from scratch, you wouldn't want to make it look like the Cricket." 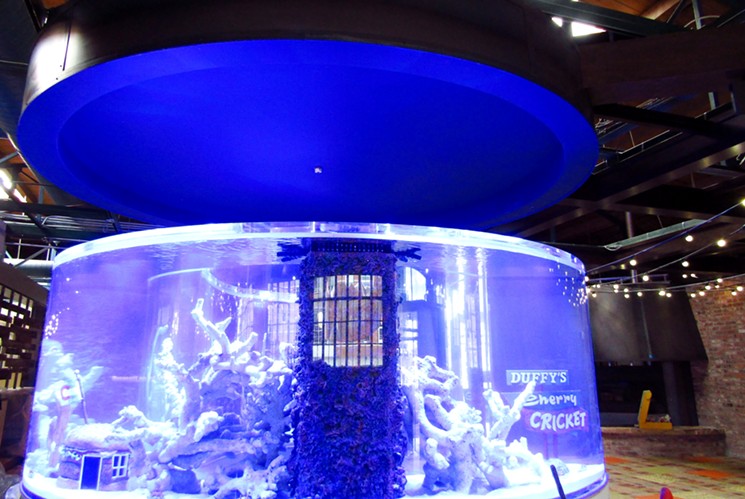 This is what Denver will look like when climate change causes the planet to flood.
Mark Antonation
Despite the original's vintage charm, it is a tight space without much in the way of comfortable amenities. The Ballpark sibling is far larger in square footage but will only have a little more seating, so there's more room to relax and for staff to move around. Taking inspiration from the fish tanks at the first Cherry Cricket, the focal point of the new outpost will be a 1,500-gallon saltwater aquarium that the company says is the largest live-reef tank in any restaurant in Colorado.

Entering the restaurant, guests will walk past the aquarium to the raised bar area or to one of several interconnected dining rooms divided by partitions that break up the room without blocking views. To the right of the entrance is a new feature: a takeout counter that will stay open until 3 a.m. on weekends for late-night diners who want a burger and shake to go. In the back, there's a separate game room where families and guests waiting for tables can enjoy arcade games. A new takeout counter will serve burgers and shakes until 3 a.m. on the weekends.
Mark Antonation
The original Cherry Cricket has been flipping burgers for more than seventy years at 2641 East Second Avenue in Cherry Creek, and this is the first time that the name will grace more than one building. Breckenridge-Wynkoop bought the restaurant in 2001 and expanded with additional dining space over the last seventeen years, but has focused primarily on other projects (including building the sprawling Breckenridge Brewery and its accompanying restaurant, the Farm House, in Littleton, which Anheuser-Busch InBev purchased in 2015). Some lucky fish will get to live inside a Cricket Burger.
Mark Antonation
click to enlarge There won't be a big Cherry Cricket sign outside, but the fish will have their own miniature version.
Mark Antonation
You won't see the familiar "Duffy's Cherry Cricket" sign out front, at least not in its original, three-dimensional form. Driscoll says sign restrictions in the Ballpark neighborhood, especially on landmark buildings, mean that something more demure is in the works. But there's a miniature replica of the sign, along with a swim-through cheeseburger for the fish and other Cherry Cricket memorabilia, inside the new aquarium. There will be enough miniature crickets nestled in among the coral and rocks at the bottom of the aquarium that kids who can count them all will be able to win a prize.

While the new Cherry Cricket won't be serving food until April 17, representatives of the restaurant will be handing out swag outside the eatery the day of the Rockies home opener, Friday, April 6.

And come April 17, all of Denver will for the first time have a choice of where they want to eat their Cricket Burger.