Metro Caring is one of the organizations that has benefited from the Food Pantry Assistance Grant Program. Courtesy of Metro Caring
The Food Pantry Assistance Grant Program, a partnership of the Colorado Department of Human Services and the Department of Agriculture’s Colorado Proud, has provided $5.6 million to 180 food banks and pantries around the state since last July. But now the funding for the grants is set to run out at the end of June.

MetroCaring, an anti-hunger organization in Denver and one of the recipients of funds from the program, has seen demand for assistance increase by 300 percent during the pandemic. “Pre-COVID, we were averaging just over 2,000 families a month. Since March 2020 through today, we are seeing an average of over 7,000 families a month,” says Sheena A. Kadi, communications director for the organization.

The Food Pantry Assistance Grant Program provided MetroCaring with $6,000 in August, $5,700 in October, and then $125,000 in January, after  the program received additional government funding. Those funds helped MetroCaring establish relationships with various Colorado food producers, such as Freshly Milled LLC for flour and Barber’s Foods for beans and meat. It also connected MetroCaring with East Denver Food Hub, which helped source Colorado beans, eggs, mushrooms, oil and various other types of produce, explains Tommy Crosby, the group's food access manager.

The partnership between CDHS and CDA predates the pandemic, but funding increased last summer after the Colorado Legislature passed House Bill 20-1422, which designated $600,000 to be used to combat the increased need for food assistance. That money was also intended to help food producers in the state. “More than $372,000, or at least 62 percent, of dollars were spent on [the] Colorado Proud brand, or goods that were grown, raised or produced in Colorado,” according to the Food Pantry Assistance Grant Program final report that was recently release.

Kathy Underhill, the CDHS's food distribution programs manager, says the grant program was originally designed to “marry together hunger relief and local agriculture.” The report notes that Colorado has 38,000 farms that provide more than 195,000 jobs and contribute more than $47 billion to the state's economy annually.

But those farms have taken a hit, too. 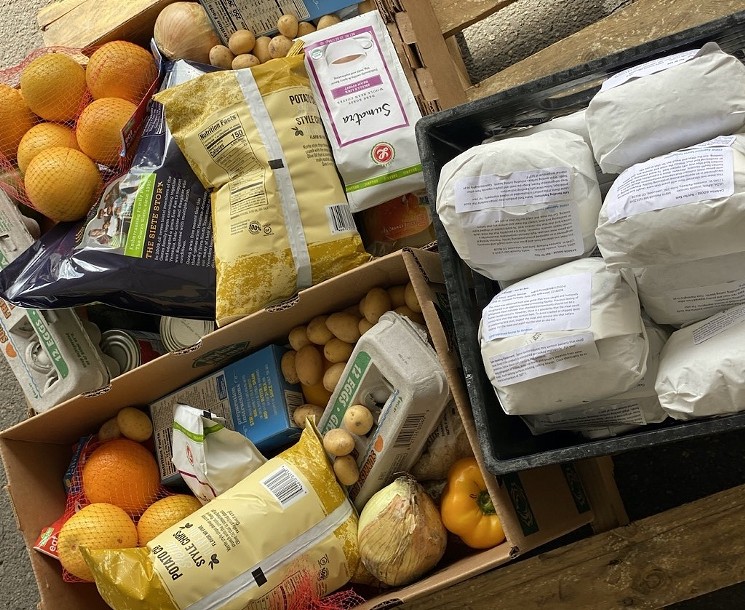 Tommy Crosby, the Food Access Manager, says the funds have allowed them to further connections with various local producers.
Courtesy of Metro Caring
In its 2021 Business Economic Outlook, the University of Colorado Boulder’s Leeds School of Business estimates that Colorado’s net farm income decreased to $1.7 billion in 2020, a $200 million decline from 2019 that was driven by the pandemic and environmental factors. Government programs account for 28 percent of that income, CU Boulder estimates; the Food Pantry Assistance Grant Program is just one of those government programs.

And now MetroCaring’s most recent funding from the program is almost depleted. “Without continued funding sources, we'll have to rely on monetary donations for our general fund to fill that gap,” Kadi says. While the organization will still receive donations from community partners such as Whole Foods, it will not be able to purchase as many staples from local and statewide producers, even as demand remains high, she explains.

While Colorado’s unemployment rate is decreasing — the preliminary March rate was 6.4 percent compared to 12.1 percent in April 2020 — there’s still a lag between people finding jobs and re-establishing financial security, according to Underhill. Recovery depends on “how much debt have people incurred and how long will it take people to dig out of that,” she says, adding that she expects Colorado to continue to see elevated levels of need for at least the next twelve months.

According to Feeding America, the nation’s largest domestic hunger-relief organization, it took nearly ten years after the Great Recession for food insecurity to return to pre-recession levels. And while its data shows that food insecurity across the country remained lower through the past year than initially anticipated, “without the response from federal and local governments and the generosity of the private sector…more people would have faced hardship.”

Learn more at metrocaring.org and hungerfreecolorado.org.
KEEP WESTWORD FREE... Since we started Westword, it has been defined as the free, independent voice of Denver, and we'd like to keep it that way. With local media under siege, it's more important than ever for us to rally support behind funding our local journalism. You can help by participating in our "I Support" program, allowing us to keep offering readers access to our incisive coverage of local news, food and culture with no paywalls.
Make a one-time donation today for as little as $1.
Claire Duncombe is a Denver-based freelance writer who covers the environment, agriculture, food, music, the arts and other subjects.
Contact: Claire Duncombe