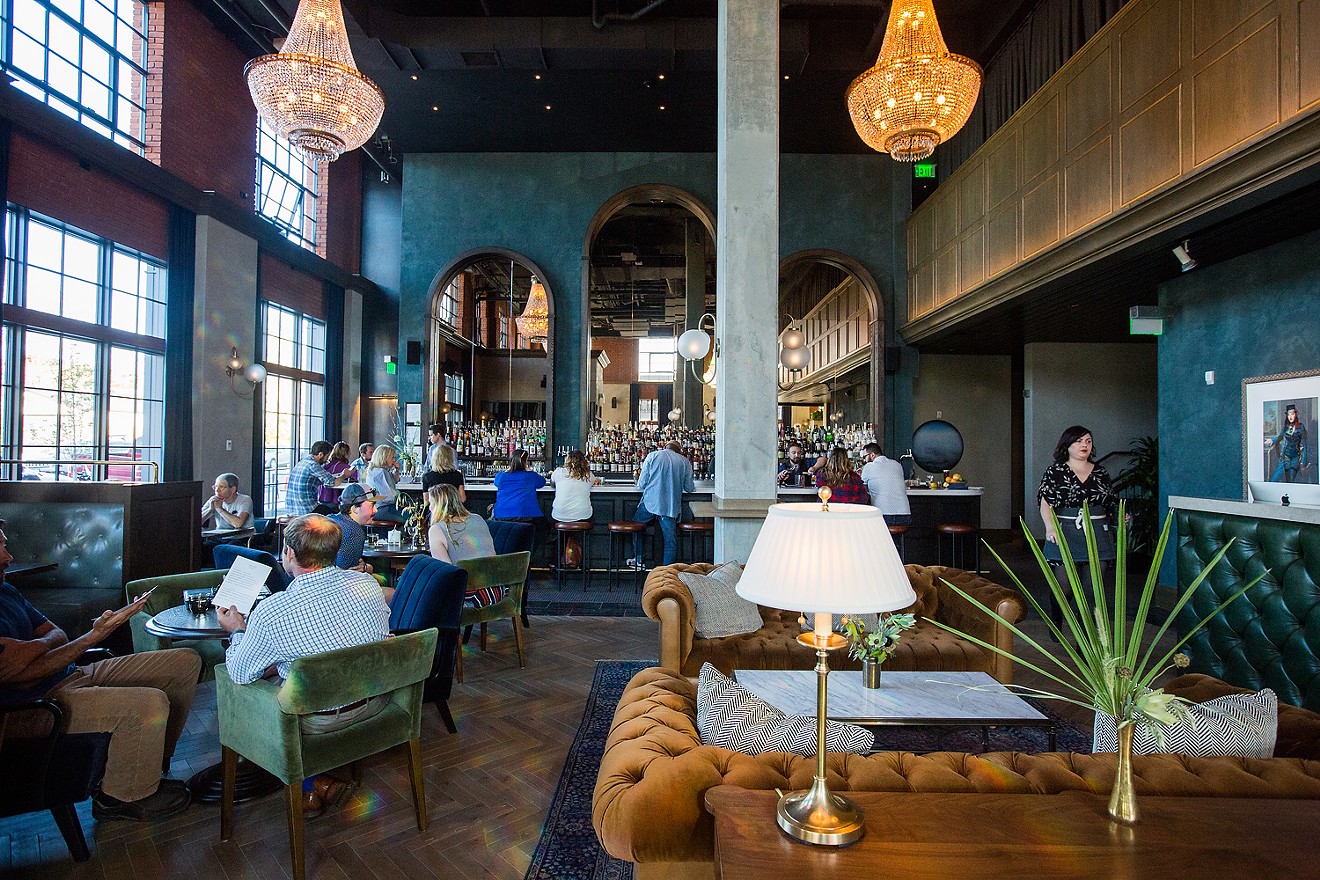 Death & Co's bar blends seamlessly with the lobby of the Ramble Hotel. Danielle Lirette
The RiNo Art District got its first boutique hotel with the opening of the Ramble at 1280 25th Street last weekend. And with it came a complete food and beverage program from acclaimed New York City cocktail pioneer Death & Co.

Your first thought might be "Great — another out-of-town interloper trying to show Denver how it's done back east." But that's not the goal of Death & Co co-founder David Kaplan and partner Alex Day. Instead, they've hired a team that's 90 percent local, created a whole new cocktail menu exclusive to the Denver Death & Co, and reimagined the dark, intimate East Village bar as an opulent, wide-open space where the bar, dining areas, cafe and hotel lobby flow seamlessly, with no clear delineations. New York City's Death & Co introduces a new cocktail program for its Denver debut.
Danielle Lirette
While this is the first Death & Co outside of New York City, Kaplan and Day have launched ventures in Los Angeles and now Denver, so they're accustomed to adapting their vision to a new audience. "We're not building a New York Bar in Denver; we're building a Denver bar," Day explains.

He also points out similarities between Manhattan's East Village when the original Death & Co opened eleven years ago and the RiNo neighborhood now. "It was a little bit on the fringe of things, and that energy is something we really loved," he notes. "This neighborhood has that really exciting energy and flow." Death & Co's bar is one of several areas where you can drink and dine inside the hotel.
Danielle Lirette
Whether you're a guest at the hotel or are just stopping by for food and drinks, there are several options available throughout the day. DC/AM is the breakfast side of Death & Co, with a coffee bar in the lobby for espresso drinks, pastries, topped toasts, breakfast bowls and sandwiches, and a few larger plates for heartier appetites. The only room service at the Ramble will come from DC/AM from 6 to 9 a.m. daily; guests can order from tablets in their rooms (since there are no land lines in the hotel).

If you're looking for booze, pull up a stool at the Death & Co bar, where you can thumb through six pages of cocktails, with different beverage styles — from "Fresh & Lively" to "Boozy & Honest" — on each page. A small wine list and a handful of draft beers round out the list.

This stuffed Persian cucumber is not your standard bar fare.
Danielle Lirette
Food options range from snacks to steaks, but don't expect standard bar fare; burrata, hamachi crudo and Persian cucumber stuffed with beans and pine nuts take the place of familiar wings and rings. Family-style plates designed for two or three diners include striped bass, lamb saddle and roast chicken. Seating may feel a little ambiguous at first, but there are plush booths tucked in along the windows, cozy nooks for something a little more intimate, and breezy lounge areas where you can settle into a comfy armchair with a cocktail.

Beyond the lobby, there's also a mezzanine bar called Suite 6A that will open soon as a more private, reservation-based spot for drinks (though some seats will be held for walk-ins) and a second-floor garden patio that will have its own drinks list. The hotel also has a music and events venue called Vauxhaul that will host entertainment as well as private soirées.

The Ramble Hotel is the project of Ryan Diggins of Gravitas, a development company that also built the shipping-container complex across the street that houses Work & Class, Cart-Driver and Port Side. This weekend, the Work & Class team — Tony Maciag, Tabatha Knop and chef Dana Rodriguez — will open Super Mega Bien, their new pan-Latin American eatery that's also located inside the hotel.

For more photos of the Ramble Hotel and Death & Co, see our complete slideshow.
KEEP WESTWORD FREE... Since we started Westword, it has been defined as the free, independent voice of Denver, and we'd like to keep it that way. With local media under siege, it's more important than ever for us to rally support behind funding our local journalism. You can help by participating in our "I Support" program, allowing us to keep offering readers access to our incisive coverage of local news, food and culture with no paywalls.
Make a one-time donation today for as little as $1.