Prohibition Was Repealed 89 Years Ago; Here's Where to Celebrate Celebrate Repeal Day at the Cruise Room. Westword
Even before Prohibition officially ended on December 5, 1933, Colorado was back in the alcohol business, brewing 3.2 beer in accordance with a measure passed by the state legislature.

After more than a dozen dry years since America's failed experiment with teetotaling began on January 16, 1920 (and Colorado went temperate two years before that), Coloradans were ready to drink up. And although in 2018 the same legislature essentially put an end to 3.2 beer by allowing full-strength brews to be sold in grocery stores, there are still plenty of reasons to celebrate the end of Prohibition. And plenty of places to do it.

The Cruise Room, which was modeled after the lounge of the Queen Mary, was ready to set sail in the Oxford Hotel, 1600 17th Street, on the day that Prohibition ended. Tucked inside the circa 1891 hotel, it's still an Art Deco classic, and one of the 100 bars we can't live without in 2023. On December 5, it's offering two classic cocktails for $19.33, with options including a gimlet, an Old Fashioned, a Sazerac and  a French 75. 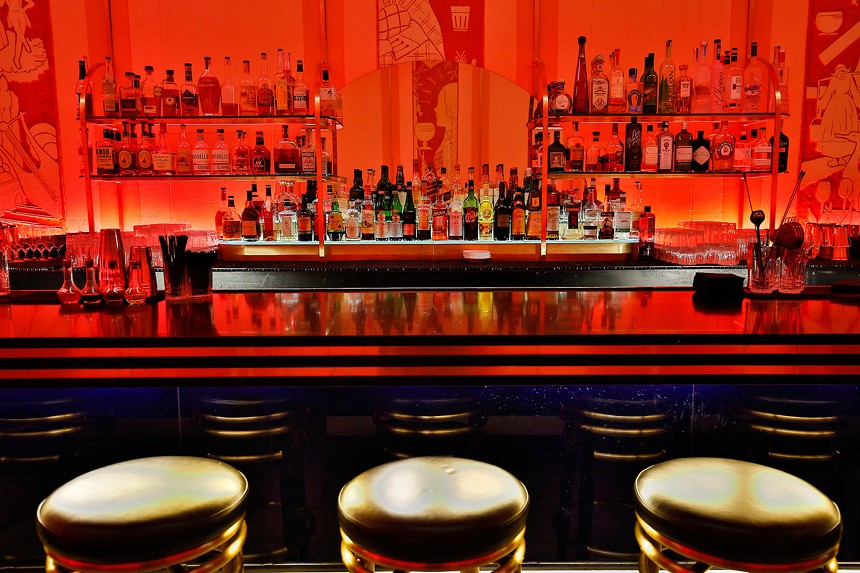 The Cruise Room
The Brown Palace, at 321 17th Street, was constructed a year after the Oxford, and it was a year behind in opening its cocktail lounge: The Ship Tavern launched on August 24, 1934. Initially, this space in the corner of the building held shops, then a gentlemen’s club. After Prohibition ended, though, the Boettcher family, which owned the hotel at the time, decided to turn it into a nautical bar, complete with model ships and a crow’s nest. After a fire in the basement right before Thanksgiving, everything is again ship-shape at the Brown. 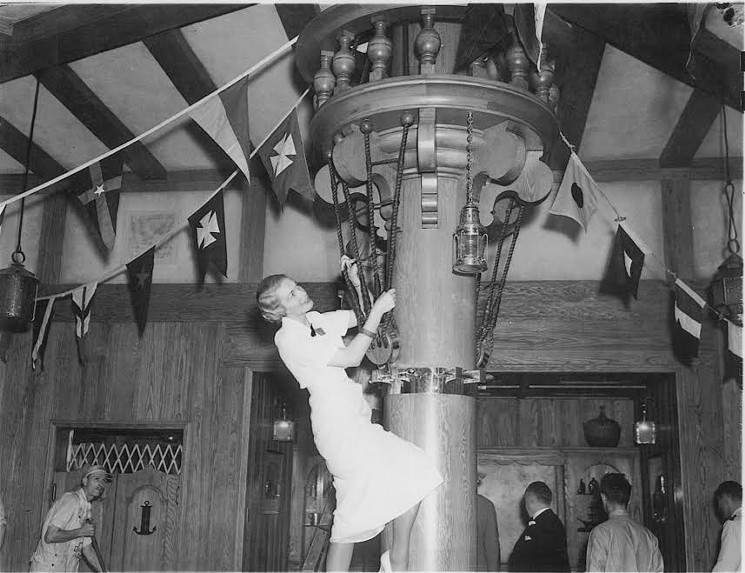 An intrepid employee climbs the crow's nest in the new Ship Tavern.
Courtesy of the Brown Palace
Want to raise a glass at another old-time spot? You can’t beat My Brother’s Bar, whose home at 2376 15th Street has held a saloon since the 1880s, except for that unfortunate time when the 18th Amendment ruled. It's gone through many names and somewhere along the way lost its second story, but it's a legend in this town. An Old Fashioned with a cherry garnish at My Brother's Bar.
Molly Martin
Not quite as old as My Brother’s but boasting liquor license #1 (simply because it was first in line after Prohibition ended) is the Buckhorn Exchange, at 1000 Osage; that building dates back to 1893, when it was a favorite hangout for hunters and outdoorsmen, including Teddy Roosevelt.

By then, the Rock Rest, at 16005 Old Golden Road, was already catering to another kind of sporting man. According to local legend, the front of the Rock Rest was built around 1885 as a trading post and stagecoach stop. As nearby Camp George West expanded, the Rock Rest did, too, adding a lodge, ballroom and “private” brothel areas around 1907. It went through a series of owners as it operated as a speakeasy through Prohibition, then returned to a certain respectability during the Depression. It's stayed in business ever since, though it suffered a tragedy this fall when a disgruntled bar patron drove his car into a group outside the bar, killing an employee.

Monaghan's Bar and Grill, at 3889 South King Street in Sheridan, opened back in 1892 near the old Fort Logan military base, serving military folks and civilians alike. Although Fort Logan closed after World War II, the bar has stood the test of time (and Prohibition) and retains relics of its storied past; its current liquor license dates to the day Prohibition ended.

We've had to say goodbye recently to two Prohibition-era favorites. El Chapultepec, the legendary club at 1962 Market Street, got a jump on spots like the Cruise Room when Tony Romano started pouring that 3.2 beer in the summer of 1933. Romano’s son-in-law, Jerry Krantz, inherited El Chapultepec in the 1970s, adding jazz to its menu; it shuttered in December 2020, and the building was recently purchased by Monfort Companies, which has promised a "rehabilitation and amalgamation of El Chapultepec" and the Giggling Grizzly space next door.

On South University Boulevard — a dirt road during Prohibition — the Bonnie Brae Tavern opened on June 6, 1934. It was one of the oldest continuously operating restaurants in Denver, certainly the oldest run by the same family, until it shuttered in June. The building will be torn down, and the property is set to become an apartment complex.

On Prohibition Day, it's a perfect time to head to one of the classic spots that remain and raise a glass to Repeal Day. Just don't try to order a 3.2 beer; that's gone the way of bathtub gin.
KEEP WESTWORD FREE... Since we started Westword, it has been defined as the free, independent voice of Denver, and we'd like to keep it that way. With local media under siege, it's more important than ever for us to rally support behind funding our local journalism. You can help by participating in our "I Support" program, allowing us to keep offering readers access to our incisive coverage of local news, food and culture with no paywalls.
Make a one-time donation today for as little as $1.