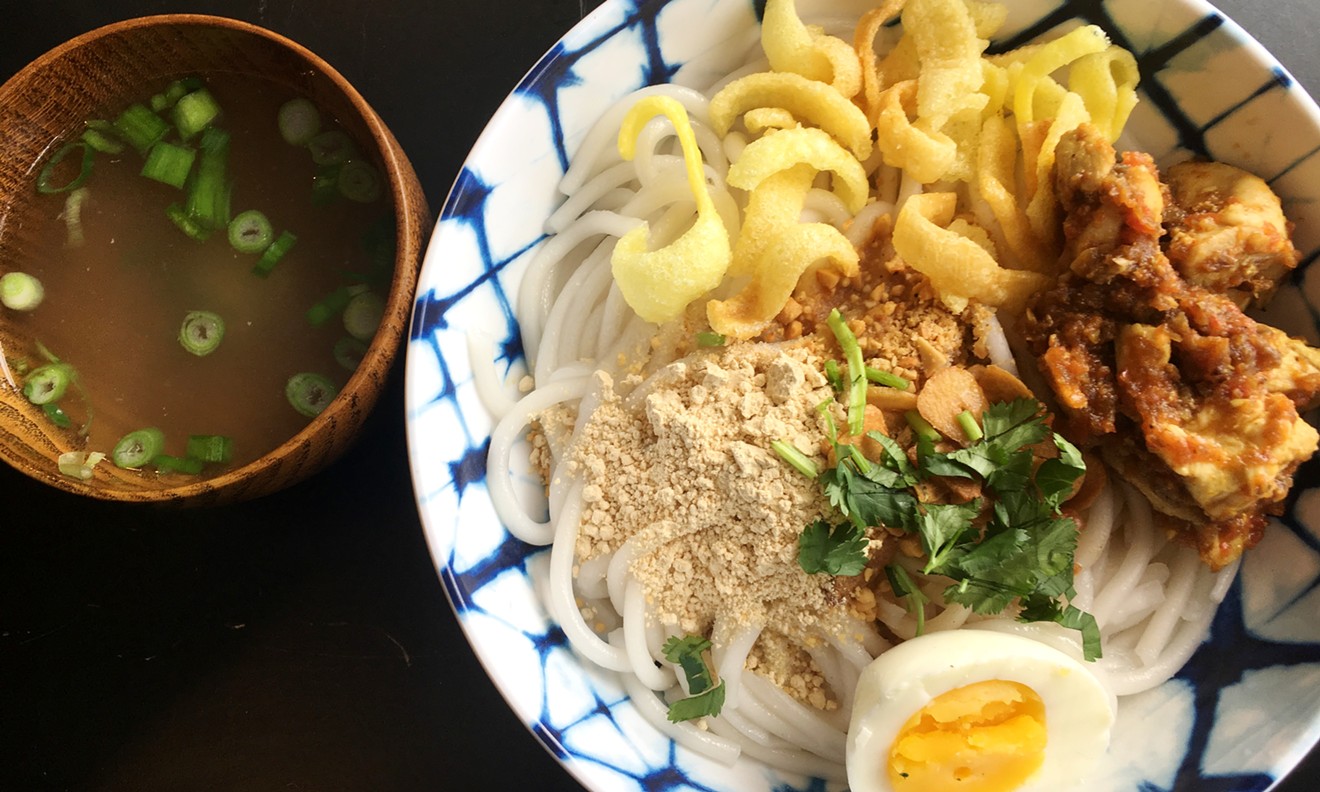 Urban Burma's traditional cuisine can be found at Mango House on East Colfax Avenue. Mark Antonation
This has been a year for noodles and dumplings, a year for Southeast Asian cuisine, a year for international food of all kinds in metro Denver. Sure, French, American and Mediterranean restaurants have had their moment in the sun over the past twelve months, but chefs and restaurant owners have stepped up with incredible Chinese, Vietnamese, Thai, Burmese, Mexican, African and Indian destinations in central Denver and the suburbs. Here are the fifteen best restaurants to open in 2019 (so far); we'll revisit the list in a few weeks to consider any late-December surprises. 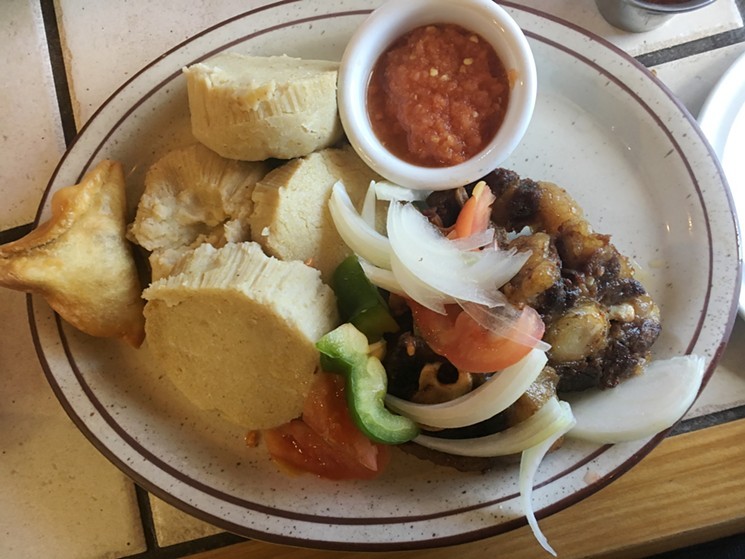 955 South Kipling Parkway, Lakewood
303-985-4497
africangrillco.com
Sylvester and Theodora Osei-Fordwuo launched their second eatery at the beginning of 2019, bringing their unique, delicious cooking to Lakewood after the success of their Green Valley Ranch location. You'll find bold spices flavoring uncommon dishes representing Ghana, Nigeria and other African nations, as well as warm service from the owners and their family. Start with familiar samosas, meat pies, wings and fried plantains before exploring the wide range of porridge-style dishes that go by various names — fufu, sadza, kenkey, banku — depending on the main ingredient (cassava, cornmeal, plantain or yam, for example) and country of origin. Slow-cooked greens, braised meats and mouthwatering sauces round out plate after plate. African Grill & Bar is an unforgettable journey for vegetarians and meat lovers alike. 4132 West 38th Avenue
720-749-3186
amelm.com
Restaurateur Bob Reiter and chef Brent Turnipseede have created a tasty West Highland neighborhood grill with food and drinks that rise above standard comfort fare while appealing to a broad range of diners. Hints of Southern cooking and surprising ingredient combinations elevate classic dishes, whether the bone marrow butter on the steak frites, cured egg yolk in the pasta carbonara, or mixed chicharrones (pork, duck and beef) in the "Animal Crackers" bar snack. Combine all that good food with an intelligent cocktail program and you've got one hot little eatery making noise in an otherwise quiet neighborhood. There's more than one place in town to get French onion soup dumplings, and they're both called ChoLon.
Courtesy ChoLon

10195 E 29th Dr Ste 140, Denver, CO 80238
720-550-6934
cholon.com/stapleton/
Chef/restaurateur Lon Symensma's original ChoLon Modern Asian on the 16th Street Mall continues to be one of Denver's top dining destinations, and now the inventive pan-Asian menu — or the best parts of it — are being served in Stapleton, along with a whole range of family-friendly new dishes built for the neighborhood. So longtime fans will still be able to indulge in the French onion soup dumplings, but a new roster of other dumplings is also available, as well as Singaporean crab cakes, pineapple fried rice and braised beef coconut curry. It's all enough to make downtown denizens jealous. 1700 Platte Street
720-667-4652
daughterthaikitchenandbar.com
Thai came to one of Denver's fastest-changing restaurant neighborhoods this past summer as the owners of Golden's Citizen Thai opened their second restaurant. The spare and elegant space makes for the perfect stop for Platte Street office workers to unwind with cocktails after work while sampling their way through appetizers — Bangkok ribs, crispy-fried frog legs in pla-larb sauce, marinated beef rolls — that all burst with flavor. The entree menu combines street-food favorites with more upscale dishes, so you can slurp noodles to your heart's content or splurge on rack of lamb with a fiery massaman curry. 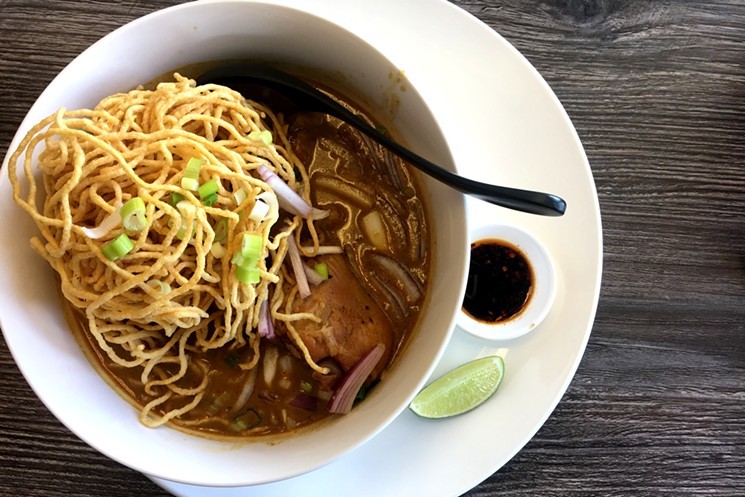 98 Wadsworth Boulevard, Lakewood
303-237-2475
farmhousethaieatery.com
Freshness and balance are the keys to great Thai cuisine, and this new Lakewood kitchen serves up both, whether in seasonal salads like the Burmese Garden (tossed with whole tea leaves) or the Hello Summer (with watermelon, mint and lime leaf), rich curries and soups (don't miss the incendiary khao soi) and enlivened classics from floating market noodle soup to the sublimely porky hang le curry. Everything is made from scratch and loaded with the Southeast Asian flavors of galangal, lemongrass, garlic, tamarind and chiles. The casual setting and reasonable prices encourage repeat visits to explore new flavors and seasonal specials. The bar inside the new Carboy Winery, attached to Logan Street.
Mark Antonation

400 East Seventh Avenue
720-617-9400
loganstreetdenver.com
carboywinery.com
After Govnr's Park Tavern closed, residents of Capitol Hill were left wondering what would take the place of the old bar and grill and its neighbor, Lala's Wine Bar + Pizzeria, which closed at the same time. After a complete overhaul of the entire space, the owners of Angelo's Taverna and Carboy Winery unveiled Logan Street in the Govnr's Park location, with the attached winery and tasting room next door. The light, Mediterranean-inspired menu and wide-open dining room proved exactly what the neighborhood needed, and guests have been packing the place ever since. Wood-grilled seafood, flatbread pizzas and mini pitas are big draws, and Carboy's Colorado wines attract customers to the corner wine bar, where charcuterie boards complement the riesling, cabernet franc and merlot.