Former Chef Turns to Pottery to Enhance the Beauty of Food 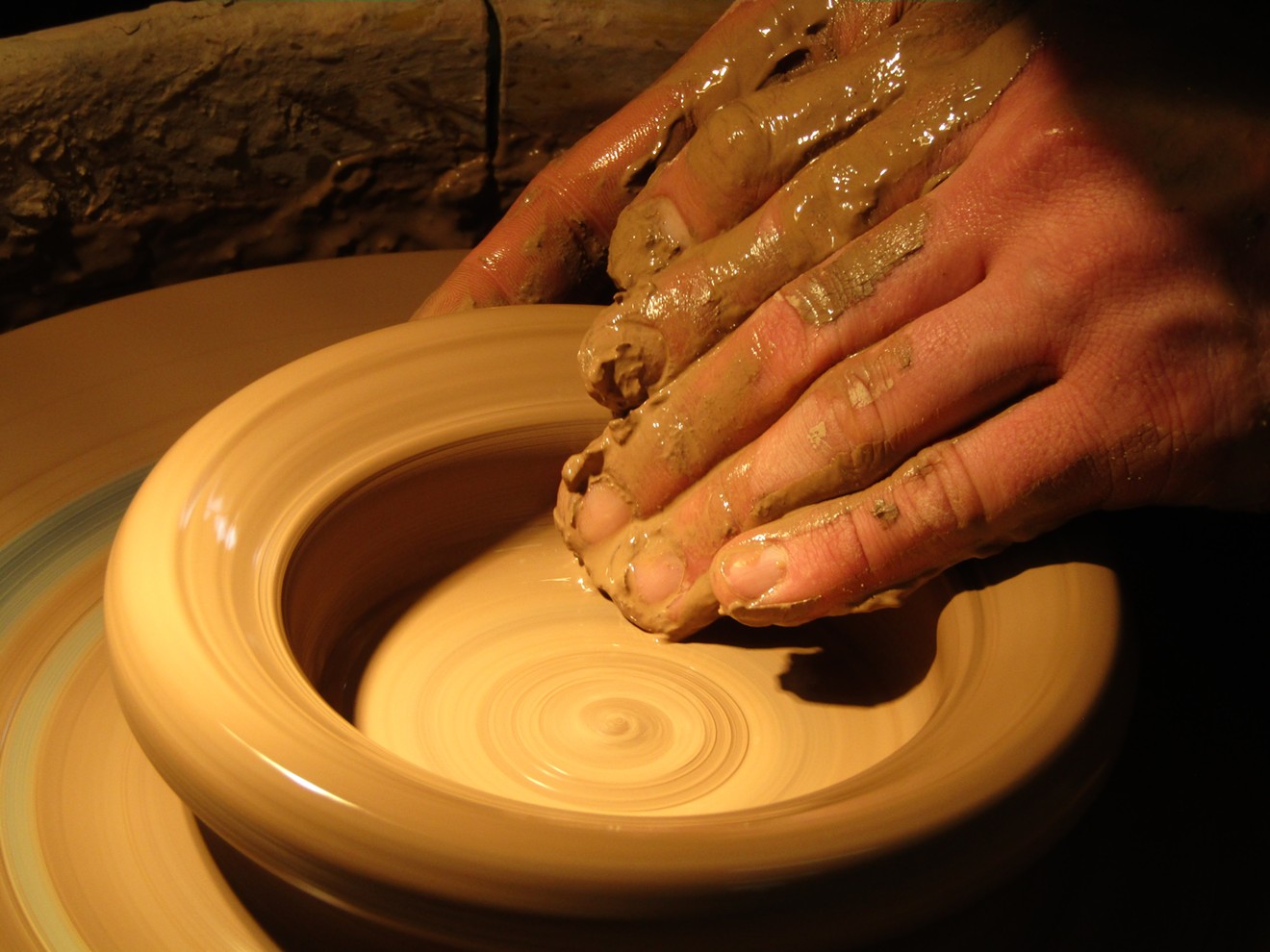 Clay becomes a vessel in the hands of an artist. Mark Antonation
Nathan Mencini leads the way through a warren of hallways, studios, common areas and dead-ends that make up the massive artists’ collective at 999 Vallejo Street known as Prism Workspaces. His studio is located at the back corner of the second floor of a building lost in a sea of other warehouses and factories in Denver’s Lincoln Park neighborhood. Mencini jokes that every day the place smells either like weed from the marijuana grow across the street or coffee from the Daz Bog roasting facility to the north, depending on which way the wind is blowing.

But the predominant smell inside his studio is neither pot nor coffee; it’s the primordial whiff of wet clay — a heavy, mineral smell reminiscent of riverbanks and rainy days. Mencini is a potter who just recently began specializing in serviceware for restaurants — an unusual but somewhat fitting trajectory for a chef who up until a year or so ago had dedicated his life to professional cooking. 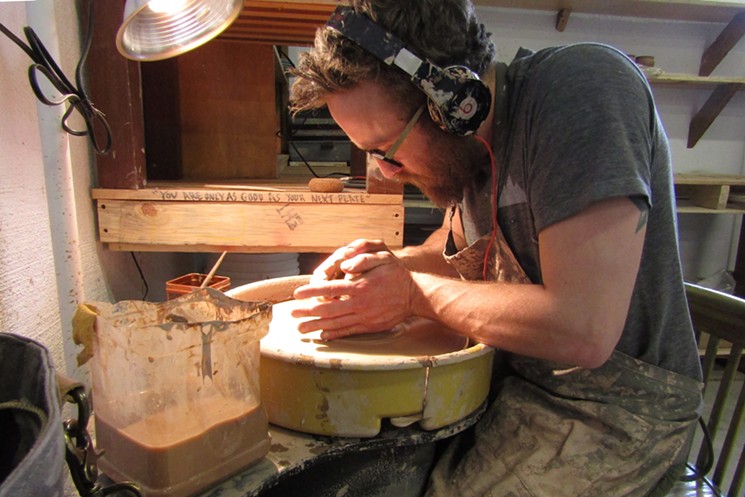 Artist Nathan Mencini at his ceramics studio at Prism Workspaces.
Mark Antonation
“I’ve been playing with clay for a year now,” he says. That seems like an almost foolishly short period of time to become proficient at something as difficult as turning, glazing and firing ceramics at a level of proficiency that restaurant owners would require in order to use his work as the foundation for exquisite culinary creations going out to paying customers. But as a kid growing up in Denver, Mencini had shown plenty of artistic promise, taking private lessons and improving his skills — until he set it all aside to pursue cooking. That led him to jobs at Masterpiece Deli, Trattoria Stella, Acorn and, more recently, Annette.

The urge to dirty his hands in clay didn’t make itself known until Mencini was working at a friend’s high-end restaurant in Napa, California, and after a long night of cooking, the two sat thumbing through a restaurant-supply catalog. Mencini’s friend was impressed by a line of rustic plates and bowls but bemoaned the cost.
“I can do that,” Mencini said, but his friend was dubious. “I can learn how to do that,” he clarified. And with that, he set out to teach himself a new trade. 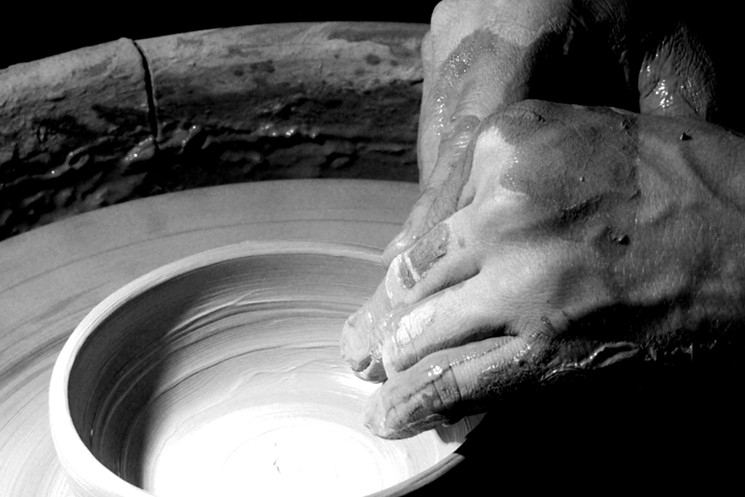 Mencini crafts a bowl out of clay.
Mark Antonation
“I’m 31, and I’ve seen all there is to see doing tweezer food,” the potter explains. “But what else can I do to enhance the look of food?”

Mencini moved back to Denver and took a job at Whole Foods to make ends meet while learning about clay, glazes and the art of kilning. “I only took one or two classes, and after that I was self-taught,” he explains. “It was just a matter of putting on my headphones and listening to enough Radiohead while I practiced.” 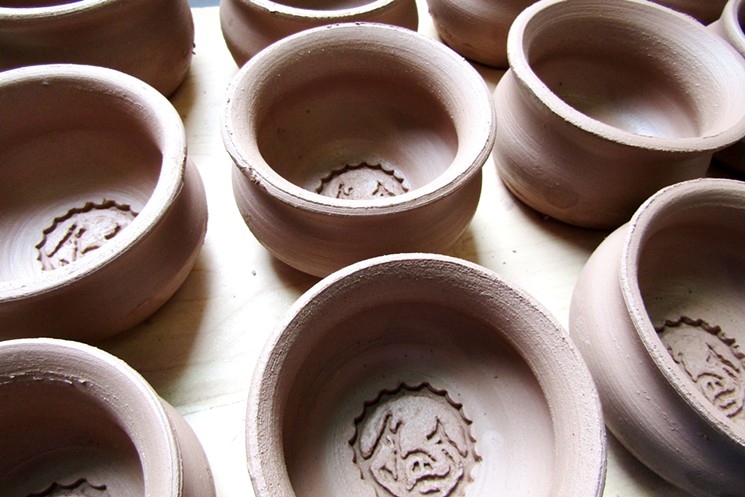 Ceramics artist Nathan Mencini carved the Cochino Taco logo in wood to use as a clay stamp.
Mark Antonation
Initially, he “fought for wheel and kiln time” at the Art Students League of Denver, but then he befriended other ceramics artists, and together they leased a space at Prism, calling themselves the Colorado Clay Collective. Mencini named his own budding business Rocco Pottery, using his Italian grandmother’s maiden name. “She’s this tiny, 89-year-old Italian woman,” he says. “She’s the only one in my family who has any artistic talent. I attribute everything I have to her.”

Mencini holds up a small, slightly asymmetrical cup. It’s a little thick and clunky, something you might drink coffee out of at home. “This is my first piece,” he says. Alongside a collection of other platters, bowls and cups in mostly earth-toned finishes that he uses as a kind of sales kit when visiting restaurants, that little cup stands as a reminder of how far he’s come in such a short period of time. His pieces can best be described as earthenware; some bear the grainy texture of the clay, and nearly all come in shades of green, gray, tan and rust (with a few bolder mineral blues and blacks) that enhance their origins in the earth. Mencini demonstrates how a bowl is made.
Mark Antonation
“I was talking to my dad and telling him that this is my passion,” Mencini recalls. “He said, ‘You’re only as good as your next plate.’” Those words are now written in ink on a wooden shelf above the Colorado Clay Collective’s pottery wheel. “They remind me to be patient — don’t rush it. Why not give it the respect and patience it deserves?”

Mencini dons his headphones and takes a seat at the wheel to demonstrate the process of throwing a simple bowl. He leans in close; the clay covers his hands, gets in his beard. Soon a reddish-brown lump spinning at the center of the wheel becomes a column, a squat cylinder, and then, suddenly — it blossoms in Mencini’s hands into a gracefully curved vessel. The bowl is perfectly symmetrical and smooth, the work of a craftsman, not a hobbyist.

A sampling of Rocco Pottery's dinnerware.
Mark Antonation
Restaurateurs are starting to recognize that. Mencini’s first commission was from Corrida, a new Spanish restaurant in Boulder from Bryan Dayton, who also co-owns Oak at Fourteenth, Acorn and Brider, and chef Amos Watts, who worked with Mencini at Acorn. The restaurant is stylish and modern, the creation of veterans looking to add to the city’s restaurant scene at the highest level — not some low-budget upstart. Corrida opened on March 24, and diners are now enjoying steaks, paella and other Spanish cuisine presented on five different pieces of Rocco Pottery.

It may be a while before Mencini can quit his day job and devote himself entirely to pottery, though. He’s getting married in May; he and his fiancée decided that once he has a year of commissions lined up in advance, he’ll be stable enough to take the plunge. Clay cups await glazing and firing before being delivered to Cochino Taco.
Mark Antonation
Johnny Ballen, the owner of Cochino Taco in Englewood, has already committed to an order. Ballen befriended Mencini after the potter came into the restaurant looking for work. They’re both graduates of Regis High School, so they bonded over that as well as a love of good tequila and mezcal. Ballen expressed interest in his ceramics, so Mencini produced a few samples of mezcal copitas, and Ballen decided to go with a low, flared cup glazed in reds and oranges to match Cochino’s color scheme. Mencini has stamped the taqueria’s pig logo inside each cup, using a wooden stamp that he carved himself to press the image into the clay.

At his bar, Ballen pours a few rounds of Mexican spirits for Mencini, noting that the shape of the copita allows enough surface area for drinkers to appreciate the various floral, peppery, vegetal and mineral elements of each mezcal — some of them created in clay stills that result in an aroma not unlike that of Mencini’s studio.