The Concert Truck brings Philly-style pretzels and fee-free AEG tickets. Denver Food Truck
Here’s a twist. AEG has partnered with the Mile High Pretzel Co. food truck to replace the salt that comes from paying exorbitant ticket fees with the salt on homemade Philadelphia-style pretzels. The box-office-slash-pretzel truck, the Denver Concert Truck, officially launches on Thursday, May 26, with a stop at the Red Rocks Trading Post for the Infamous Stringdusters show.

At one window, you can buy Mile High Pretzel Co.’s figure-eight shaped pretzels, and at another, fee-free concert tickets to AEG’s shows at Fiddler’s Green Amphitheatre, the Mission Ballroom and the Ogden, Gothic and Bluebird theaters.

Mile High Pretzel founder David Novin worked security and shot photography across AEG venues for nearly a decade before opening what he calls a “ghost bakery” last July. It started with direct deliveries to pretzel aficionados out of a commercial kitchen. However, Novin eventually lost the space and decided the next move was to acquire a truck to bring fresh pretzels to the masses. 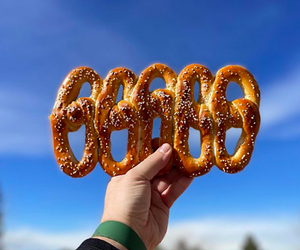 Mile High Pretzel Co./Instagram
Mile High Pretzel Co.'s truck had a soft opening in April to surprise success. “When I got the truck, I got a call from AEG, and they pitched the idea of slinging concert tickets alongside the pretzels. I thought it was genius and a no-brainer,” says Novin.

“My goal is to bring a little twist of Philly to the Mile High. Everyone loves a good pretzel. And to combine that with concerts and music fans at places like Red Rocks is something really special,” he adds, noting that he's sold his photography gear and gone "full pretzel."

So far, the Denver Concert Truck has ten scheduled stops between now and the end of June, including a return to the Red Rocks Trading Post for Lord Huron and Black Pumas on Thursday, June 2. It will also hit Fiddler’s Green, Ratio Beerworks and Our Mutual Friend Brewing.

Over the summer, it will pop up at more locations, giving away concert tickets to a variety of AEG shows. The Denver Concert truck plans to expand to the Art District on Santa Fe, South Broadway, Empower Field at Mile High, Civic Center Park, Cherry Creek Farmers Market, RiNo Art District and more local breweries. Fans can find a complete schedule for the Denver Concert Truck on its website.
KEEP WESTWORD FREE... Since we started Westword, it has been defined as the free, independent voice of Denver, and we'd like to keep it that way. With local media under siege, it's more important than ever for us to rally support behind funding our local journalism. You can help by participating in our "I Support" program, allowing us to keep offering readers access to our incisive coverage of local news, food and culture with no paywalls.
Make a one-time donation today for as little as $1.