Neighborhood Bars: Free Posole and Good Neighbors at the Hangover 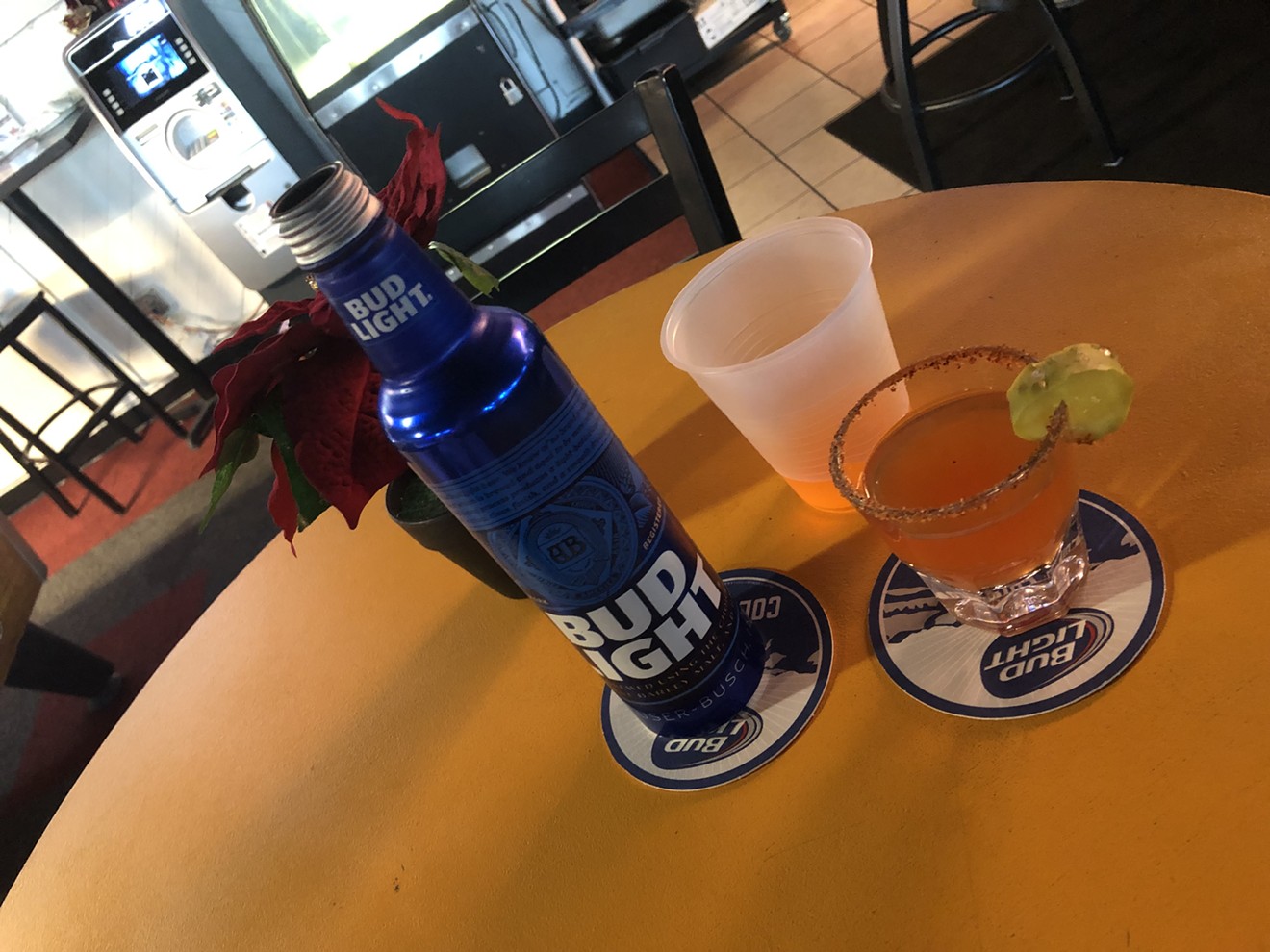 Orange and blue beverages at the Hangover Bar. Sarah McGill
The Hangover Bar, at 770 Sheridan Boulevard in the Villa Park neighborhood, has been a bar in some shape or form for years. Neighbors remember names like the Saloon, Splash, Splash II and Softails (named after the Harley-Davidson motorcycle), but for the last two years it's been the Hangover, owned by Sharon Metz, who bought the previously biker-friendly place from her cousin and renamed it.

Some friends and I dropped into the Hangover on a recent Broncos Sunday, after taking in the Tara Donovan exhibit at the Museum of Contemporary Art; one of my friends joked that the Hangover Bar was "the opposite of that."

Metz spotted me taking my obligatory photo of the sign above the door and welcomed me into the bar, where the game was already in progress on the many TVs and one enormous projection screen. The place was huge, with a stage and dance floor, a long bar, a game room with pool tables and Golden Tee, and lots of tables for sports fans and drinkers. Everything was decked out with Christmas decorations and lights, including some light-up snowflakes that seemed to sync up with the sound of music or the game. There's also an impressive collection of memorabilia displayed throughout the bar from all three Hangover movies, the inspiration for the bar's name, Metz explains.

The Hangover Bar is ready for the holidays and football season.
Shannon Salazar
After observing my note-taking, some of the regulars joked that if I was writing a novel about the bar, it would be a pretty short novel. The crowd was primarily Latino, over forty, and decked out in Broncos gear, with few exceptions, and the patrons were happy to keep me company as my friends trickled in. I appreciate a bar where people don't just tell me that it's a friendly place, they demonstrate it.

Metz keeps the regulars (and drop-in visitors like me) happy with touchdown shots — orange crush and vodka — and free posole throughout the game. Other game-day specials include $12 buckets of beers, $3 Bud and Bud Light aluminum bottles and $3 pickle shots. The house specialty shot is a mix of pickle vodka and Clamato, garnished with a pickle and a rim of seasoned salt, so I downed one of those with my Bud Light. We also dug into the posole, which hit the spot on a cold day. Metz says she prefers posole over menudo (the standard weekend hangover cure), but she always makes something for Broncos fans, whether it's a Mexican specialty or pizza and wings. There isn't a full kitchen at the bar, so she brings everything in in industrial-sized slow cookers. 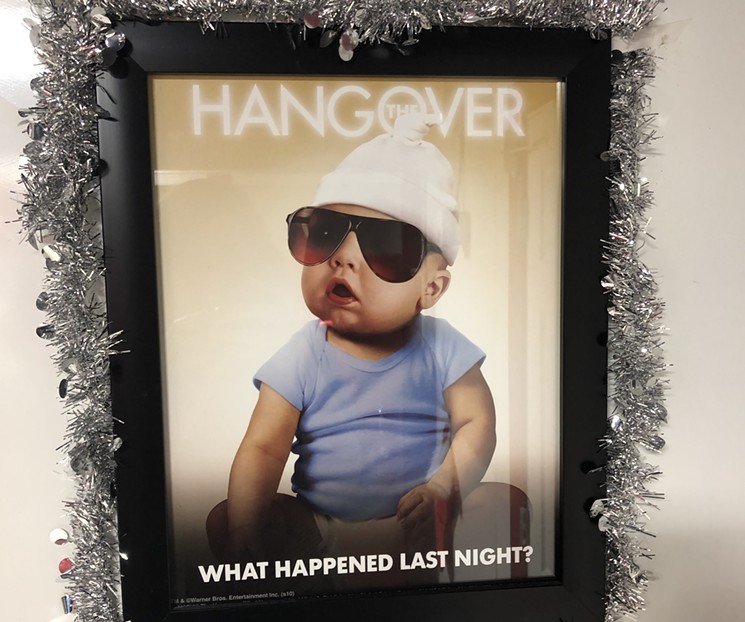 This poster in the bathroom is the perfect combination of Hangover movie memorabilia and holiday cheer.
Sarah McGill
As the sad Broncos game wrapped up with a distinct lack of further touchdown shots, preparations were being made for a fundraising party to help cover medical costs for a staff member's son. Metz is committed to helping out the community; from the first week she opened the bar, benefit events have been a staple. She grew up just down the road from the bar in Lakewood, and so was part of the neighborhood even before she bought the bar.

Metz was in the bar business as a bartender for more than fifteen years before making the leap to open her own place. As at many woman-owned bars that I love, you can count on the establishment having a hook for your purse along the bar. But more than that, the Hangover feels safe; Metz puts up with zero B.S. when it comes to drugs, violence or other shenanigans, employing a great security team that makes sure everyone feels comfortable and ready to have a great time, whether it's for a private party with a big crowd or just a casual afternoon at the bar.

In addition to the usual daily specials, music nights and Taco Tuesdays, the bar is hosting a big New Year's Eve bash, featuring DJ Chubbs and other musical acts, with drink specials and no cover. The music here ranges from hip-hop to rock to Spanish music, and one of my friends has come here to see a jazz band fronted by local legend Freddy Rodriguez Jr.

The Hangover, despite being only two years old, feels solidly Old Denver, from the music selection to the crowd to the lack of pretension. There aren't many places where you can warm up with free posole before heading out into the cold night, or where the owner says, "Come back soon," and you know she means it.
KEEP WESTWORD FREE... Since we started Westword, it has been defined as the free, independent voice of Denver, and we'd like to keep it that way. With local media under siege, it's more important than ever for us to rally support behind funding our local journalism. You can help by participating in our "I Support" program, allowing us to keep offering readers access to our incisive coverage of local news, food and culture with no paywalls.
Make a one-time donation today for as little as $1.