Adelitas/Instagram
There's no denying that Denver is a taco town — it's probably the easiest food to find in this city, from the roadside stands on South Federal where you spot al pastor cooking on a trompo to the iconic fried tacos at Mexico City Lounge to more elevated takes, such as chef Manny Barella's buttery shrimp tacos at Bellota.

But really, can there ever be enough tacos? Two new restaurants set to open soon are betting that the answer is no.

One of Denver's most popular taco destinations is Adelitas Cocina y Cantina at 1294 South Broadway. Open for nearly a decade, the restaurant specializes in food from the Mexican state of Michoacán, the home of owner Silvia Andaya. And now she's about to share her skills at a new spot set to open in early June in the building at 730 South University Boulevard that was most recently home to Brightmarten.

"This is a way to showcase the skill set of Silvia," says Nathan Ayala-Schmit, Andaya's son-in-law, who is opening the new concept called Ni Tuyo along with his wife, Karina. The name translates to "nor yours." Explains Ayala-Schmit, "It implies 'not mine,' which further implies 'it's ours.'"

The menu will be heavy on tacos and molcajetes — a signature dish of Andaya. There will also be a selection of 25 to 30 mezcals as well as tequila, though Ayala-Schmit says that La Doña, the mezcal-focused bar attached to Adelitas, is the place to go for a full agave spirit experience. Other plans include frozen cocktails served on the patio, libations made with fresh-pressed juices, and Mexican charcuterie. "If you travel in Mexico, there are these beautiful cheeses and cured meats," Ayala-Schmit notes. "It's an unbelievable accompaniment to agave spirits." 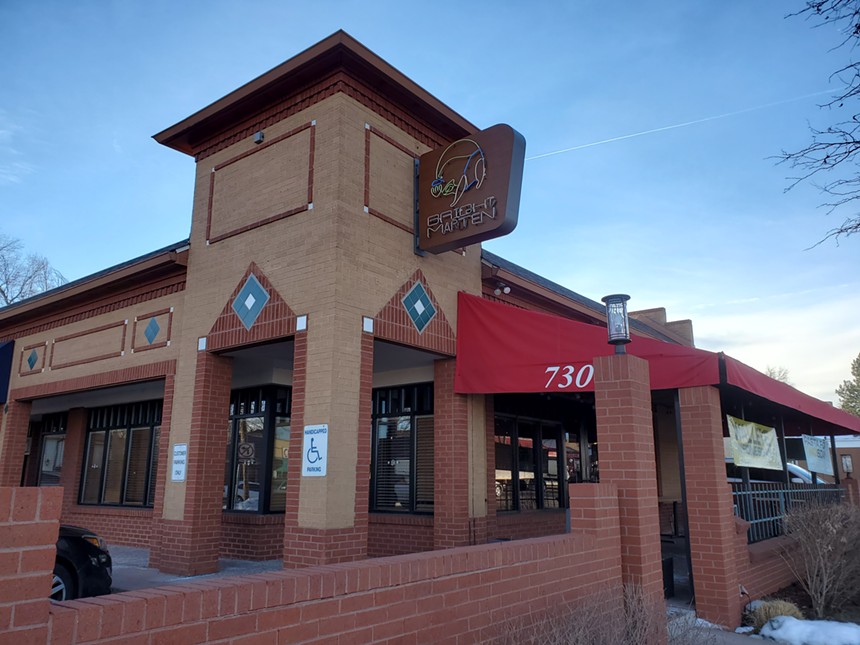 Brightmarten closed in January and will become Ni Tuyo.
Molly Martin
Over at 215 East Seventh Avenue, tacos have made a comeback. The location had been home to Tacos Tequila Whiskey and was rebranded as Taco Bar last year, when owner Kevin Morrison decided to use the outpost as a testing ground for a more fast-casual concept. He ultimately decided to shutter it in order to focus on growing the Tacos Tequila Whiskey brand at its City Park and Highland locations.

The address reopened on May 2 as Wild Taco, a sibling of Barbed Wire Reef, a street-food concept focused on wild game that's grown from food stand to truck to a brick-and-mortar at 4499 West 38th Avenue and a stall at Edgewater Public Market. Owner Rico Aragon, who's originally from Chihuahua, Mexico, is serving traditional tacos with some unexpected twists: think elk tacos, vegetarian kimchi rice burritos and carrot margaritas.

Where are your favorite taco joints in Denver? Let us know at [email protected].
KEEP WESTWORD FREE... Since we started Westword, it has been defined as the free, independent voice of Denver, and we'd like to keep it that way. With local media under siege, it's more important than ever for us to rally support behind funding our local journalism. You can help by participating in our "I Support" program, allowing us to keep offering readers access to our incisive coverage of local news, food and culture with no paywalls.
Make a one-time donation today for as little as $1.