The Preservery wants to ply you with wings this weekend. Danielle Lirette
This weekend offers wings, worms, warblers and wine in eateries and bars around town. Whether you're munching on crickets or listening to classical music while you're waiting for Monday to come around, you'll find something tasty on the culinary calendar. Here are the five best food and drink happenings through March 31, plus more options in the coming weeks and months. 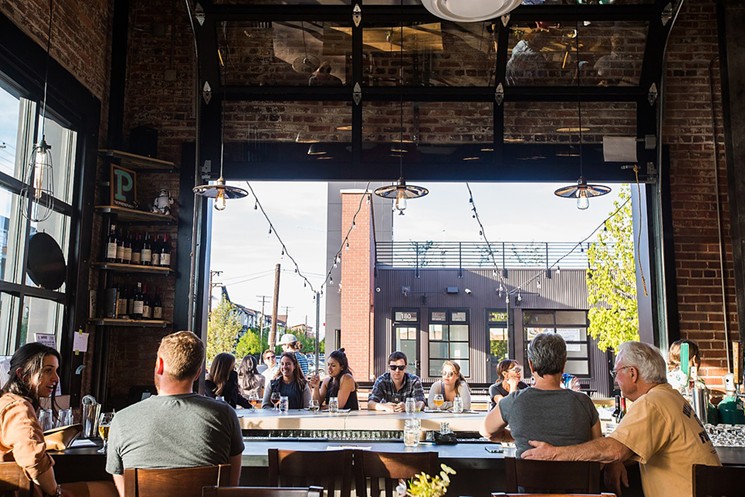 The Preservery wants to ply you with wings this weekend.
Danielle Lirette
Friday, March 29
The Preservery, 3040 Blake Street, has been running its monthly Wing-a-Ling special for a while now, but this week, the RiNo restaurant is revving up the chicken-wing social hour to celebrate three years in business. On Friday, March 29, and Saturday, March 30, guests who purchase a drink between 5:30 and 7:30 p.m. will receive a free order of everyone's favorite chicken part; the Preservery's version comes with rosemary and garlic Buffalo sauce and garlicky aioli. Don't be a greedy clucker — you're limited to one order. Details are up on the eatery's Facebook page. Cricket legs are the new chicken legs.
Linnea Covington
Saturday, March 10
What happens on a micro ranch? Do tiny cowboys round up miniature cows while riding pint-sized ponies? Not at the Rocky Mountain Micro Ranch, 4845 Morrison Road, Colorado's only edible insect farm. If you want to see what insect farming is really all about, sign up for a tour on Saturday, March 30. It turns out that crickets and other insects are surprisingly tasty and packed with nutrients, while impacting the land and environment far less than larger livestock. Learn all about it from 3 to 4 p.m., sample some insect-based protein, then purchase products to take home and incorporate into your own cooking. Tickets are $8.79 on the RMMR Facebook page. If you miss this one, the ranch will be repeating the tour monthly.

Colorado culture isn't all mountain biking, man buns and microbreweries (though thank the eight-pound, six-ounce baby Jesus for that last one); some of us enjoy classical music, but leaving the brewery and changing out of our cargo shorts to hit the symphony is a tall order. A spate of classical and operatic performances at bars and restaurants around town has brought harmony to the hoi polloi, and on Saturday, March 30, the Upslope Brewing Co. taproom, 1898 South Flatiron Court in Boulder, is the most recent site of a malt-and-music mashup. From 5 to 7 p.m., Opera on Tap Colorado is presenting Pop Up Mahler; for just $10 (less than the price of parking at a stuffy concert hall), you'll hear the works of the Romantic composer Gustav Mahler in a casual, comfy atmosphere where no one will turn up their noses if you order a (gasp!) humble beer. Get tickets on Eventbrite, and if you really want to go all out, dig that tuxedo T-shirt out of the back of your closet.

Gather at Ratio this Sunday morning for two types of brews.
Danielle Lirette
While chef and restaurateur Frank Bonanno is probably getting most attention these days for his foray into the crowded field of food halls with Denver Milk Market, it's worth remembering that he started his restaurant empire with high-end cuisine in the form of Mizuna and Luca. The latter, at 711 Grant Street, opened a million years ago (in restaurant time, sixteen years for the rest of us), but has stayed playful and relevant over the years. Saturday, March 30, is no exception, as the eatery is hosting Pillow Fight!, a tasting menu composed of five courses of stuffed pasta. Diners who know fresh pasta is best when filled with sweet and savory delights (lobsters and leek, shreds of short rib and lemon mascarpone, for starters) will want to book their seats for the 5:30 p.m. dinner forthwith. Wine is included in the $75 price tag; you can drool over the full menu and secure your reservation on the Bonanno Concepts website.

Sunday, March 31
Anyone over the age of 27 is likely to remember using (or hearing) the phrase "Cool beans!" unironically — and is therefore cringing away into nothingness at this very moment. While the expression would seem likely to repel eaters, drinkers and everyone else, the Ratio Beerworks Cool Beans Beer & Coffee Festival sold out last year, so if you want to partake in this year's event on Sunday, March 31, you'll need to snap up tickets ($35) on Two Parts. What do you get besides entry to fest at Ratio Beerworks, 2920 Larimer Street, from 10 a.m. to 1 p.m. and a lingering sense of embarrassment when you talk about your plans? Six tasters of coffee-infused beers plus a full pour of your favorite Ratio brew, a bloody beer courtesy of the Real Dill, coffee pour-overs and demos from local roasters, and sweet and savory breakfast items from Adelitas Cocina y Cantina and Glazed & Confuzed. Drink enough beer, and sillier things than "Cool beans!" will probably come out of your mouth. 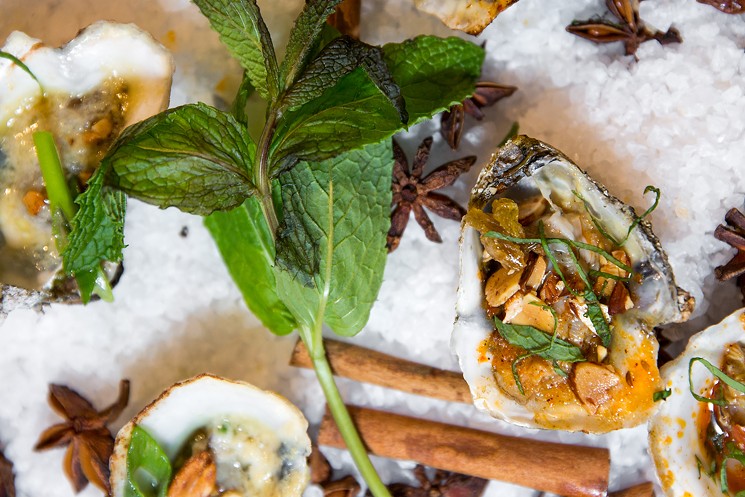 Aw, shucks! The 2018 High West Oyster Fest.
Danielle Lirette
Wednesday, April 3
The month of April is known for frantic tax return filing, but it has at least one redeeming quality: It has the letter "R" in it, so you're safe eating oysters, according to ancient wisdom. Jax Fish House is capitalizing on springtime days and putting on the High West Oyster Fest on Wednesday, April 3, where crowds of seafood lovers come face to shell with bunches of bivalves. Admission ($45 to $65 in advance at any Jax location or on the seafood shack's website) gets you food from eight great restaurants, including Fish N Beer, Stoic & Genuine, Lola Coastal Mexican, Morin and, making a reappearance in Denver after relocating to Fort Collins, the Regional; live music from Guerrilla Fanfare Brass Band; all the oysters you can fit into your gob; and attendance at oyster eating and shucking competitions. The shucking and jiving starts at 6 p.m. at Exdo Event Center, 1399 35th Street.

Tuesday, April 19
It may feel like winter will never end in the Mile High City, but in fact it's already time to start planning your spring garden dinners. The early bird gets the worm, after all, and the earliest feast to hit the table this year is already scheduled for Tuesday, April 19, at Kingman Estates Winery, 800 East 64th Avenue. Chefs Samantha New (Éclat Culinary) and Brandon Becker (Cirque Kitchen and Spirits) are teaming up to turn out an impressive nine-course meal, with pairings crafted from grapes grown entirely in Colorado, from 5:30 to 9 p.m. Fresh ingredients like melon will be served with chicory, speck and riesling, while heavier courses of beef and morels with merlot will be accented with seasonal ramps. Tickets, $138, include tax and tip, with 10 percent of sales going to No Kid Hungry; they're on sale now on the winery's website, where you can also get a peek at the entire menu.

Saturday, July 27
Boulder might be known for bougie bites (Corrida, Arcana, Frasca), but not everyone in the People's Republic wants to sit down at white tablecloths for a simple Saturday afternoon meal. Enter the town's Taco Fest, which is taking over Foothills Community Park, 800 Cherry Avenue, on Saturday, July 27. From noon to 8 p.m., guests can feast on decidedly down-to-earth street food — no matter how many crema squiggles it sports, the taco remains at heart a working man's meal, and will always be best in its simplest iteration — as well as beer, bands, luchadores and tequila (if you spring for VIP tickets). Tickets will run $20 to $50, but get yours before April 1 on Eventbrite, and you'll save five bucks. 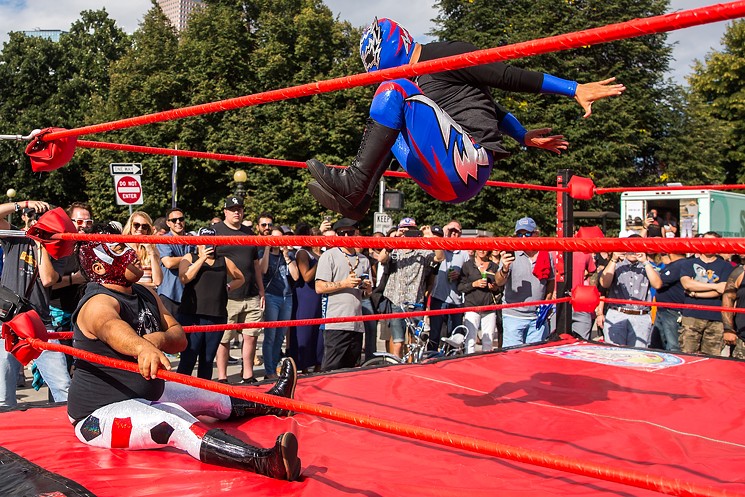 Last year's Tacolandia offered tacos and takedowns.
Danielle Lirette
Saturday, August 17
Save the date: Tacolandia will return to Civic Center Park, Broadway and Colfax Avenue, for a fourth year on Saturday, August 17, celebrating food, art, music and culture. Join us in honoring that great Mexican invention, the taco, in its many forms as presented by the city's top cantinas, taquerias and food trucks. Although tickets aren't yet on sale, get this on your calendar before your summer weekends start filling up, and watch westwordtacolandia.com for updates.

Know of an event that belongs on this list? Send information to [email protected]
KEEP WESTWORD FREE... Since we started Westword, it has been defined as the free, independent voice of Denver, and we'd like to keep it that way. With local media under siege, it's more important than ever for us to rally support behind funding our local journalism. You can help by participating in our "I Support" program, allowing us to keep offering readers access to our incisive coverage of local news, food and culture with no paywalls.
Make a one-time donation today for as little as $1.