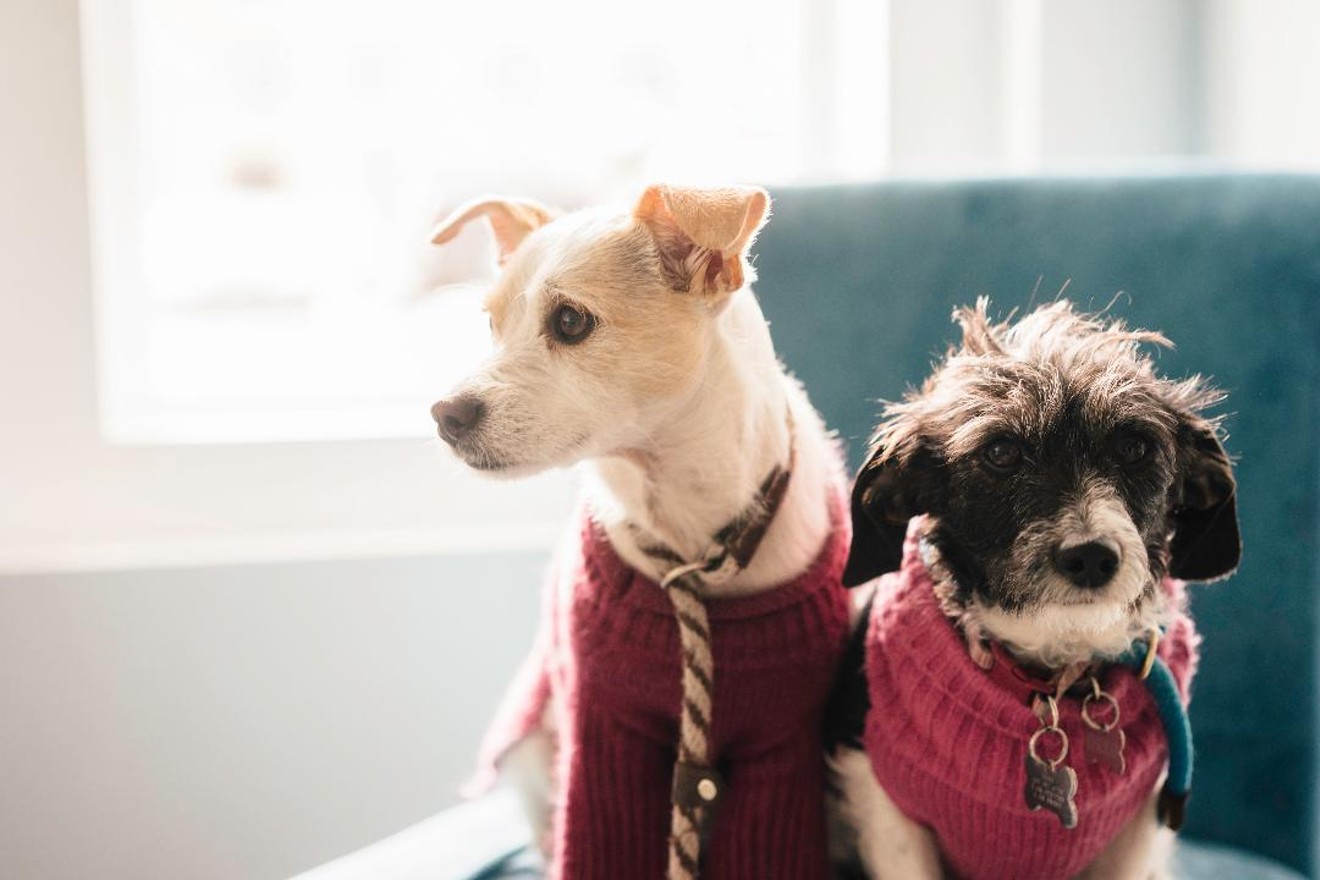 Savi and Oreo at Just Be Kitchen. Just Be Kitchen
Who says you can't have your puppy and an alfresco lunch at the same time? While city regulations prevent restaurants from welcoming man's best friend inside, Denver gives a pass to some patio and outdoor spaces. Feel free to bring your pooch along for a bite and a beer this summer at these ten dog-friendly spots. 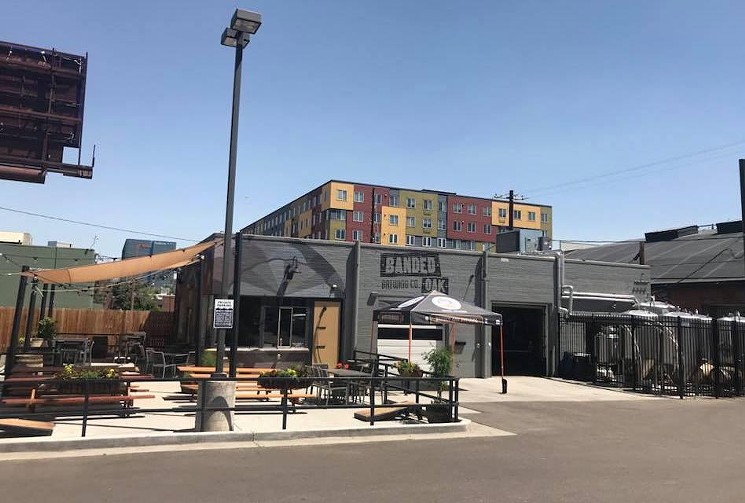 Sit outside of Banded Oak for a beer with your four-legged friend.
Banded Oak Brewing Company
Banded Oak Brewing Company
470 Broadway
720-479-8033
The patio of Will Curtin's brewery and tap house is spacious and uncluttered, both welcome features when it comes to having your animal at your side. Sip a cold American IPA laced with sweet Crenshaw melon, a refreshing blood-orange gose or one of head brewer Chris Kirk's barrel-aged beers. Not a bad way to spend the day or evening, and most Saturdays the venue hosts a food truck so you can dine while your pooch enjoys the shade. 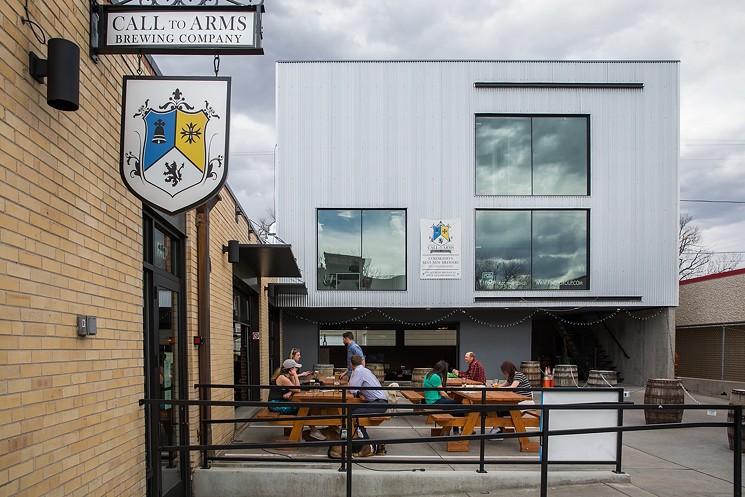 Danielle Lirette
Call to Arms Brewing Company
4526 Tennyson Street
720-328-8258
Prepare to sit back and enjoy craft beer on the patio with your pooch at this charming Berkeley brewery. There are three long, twenty-person tables to sit at, tacos and pizza to be had next door at Mas Kaos, and treats for your dog right there in the taproom. With more than a dozen rotating brews on tap and cold Colorado water in the dog bowls outside, neither hound nor human will go thirsty at Call to Arms, which is exactly how owners Jon Cross and Chris Bell want it. 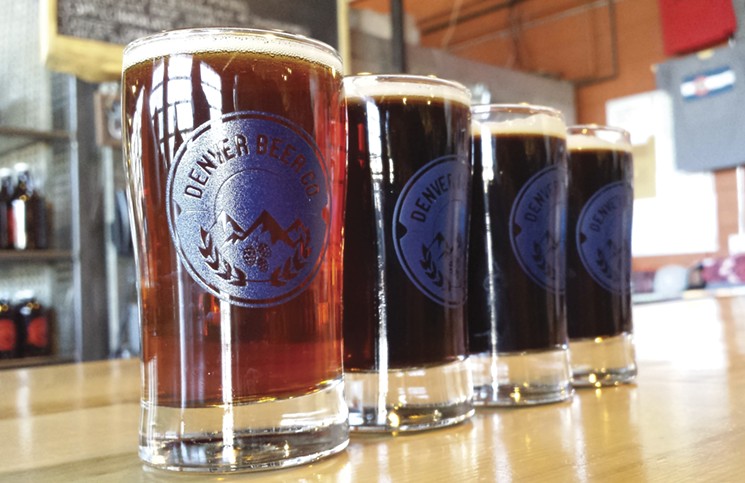 Beers inside, your dog outside.
Linnea Covington
Denver Beer Co.
1695 Platte Street
303-433-2739
It shouldn't surprise anyone that owners Charlie Berger and Patrick Crawford's seven-barrel brewhouse downtown would have room for dogs; after all, it boasts 3,400 square feet. The outdoor biergarten is where it's at, though, and the place for you and your puppy to relax with a cold pint of Princess Yum Yum or a Graham Cracker Porter. People-watch while munching on giant Bavarian-style pretzels or something from one of the weekly rotating food trucks, a lineup that includes El Gallo Blanco (Wednesdays), Basic Kneads Pizza (Thursdays), and Coastal Summit Fish Tacos (Saturdays), to name a few. 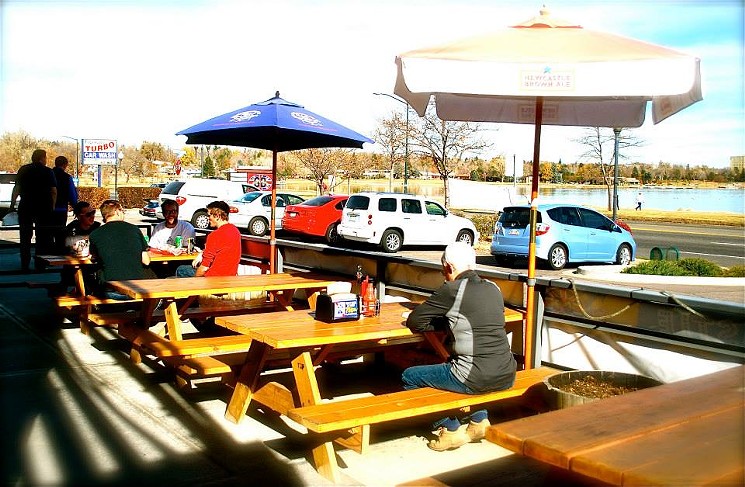 The patio of GB Fish & Chips in the Sloan's Lake area of Edgewater.
GB Fish & Chips
GB Fish and Chips
2175 Sheridan Boulevard, Edgewater
303-232-2128
The crew at this fast-casual fish-and-chips shop in Edgewater love dogs so much, they suggest bringing all the dogs — ours, our friends', our neighbors' and so on. The dog-friendly patio looks out toward Sloan's Lake, and between the view and the employee enthusiasm, bringing your pup feels just as good as downing a hearty basket of British-style fried fish and potatoes. The venue also boasts fried oysters, bangers, meat pies, baked beans, coleslaw and more, plus a great kids' menu, so not only can the family dog come, but the tots can, too. 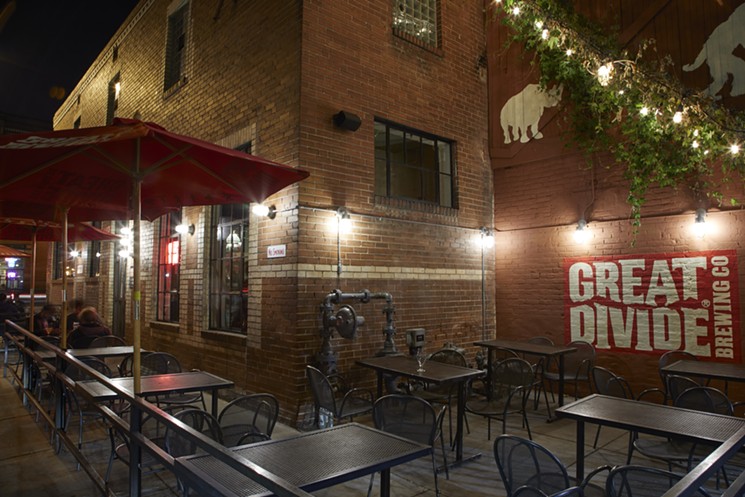 Great Divide Brewing Company
2201 Arapahoe Street
303-296-9460
Sometimes the need to wander with your pup proves strong, and at both the Ballpark and RiNo Great Divide locations, you can bring your dog in for a refresher on the patio. Order the newly released HeyDay Modern IPA, the strawberry-rhubarb sour ale or a classic Yeti stout. While you imbibe, nibble something tasty from one of the many food trucks that park during business hours; just don't forget to share some with your four-legged companion before continuing your walk.