Domo Owner Clears Up Rumors About Its Continued Closure Domo remains closed — for now. Danielle Lirette
Domo, with its peaceful backyard garden, has been a favorite spot of discerning diners for 25 years. But last year, that peacefulness was disturbed when the Japanese restaurant at 1365 Osage Street was the subject of a viral TikTok video.

At the time, chef/owner Gaku Homma was both terrified and mystified by the sudden crush of customers. “I don't know why people come or what was interesting, because that video's only forty seconds, and there is no comment," he told Westword last September. "I told my students, it's very scary that one thing can have that much power.”

The long lines led Homma, who has owned the attached Nippon Kan Aikido Dojo for 46 years, to make some changes at Domo after closing for several weeks in July to regroup. After that, hours were cut to just three days a week and capacity restricted to just twenty diners at a time, leading to long waits. 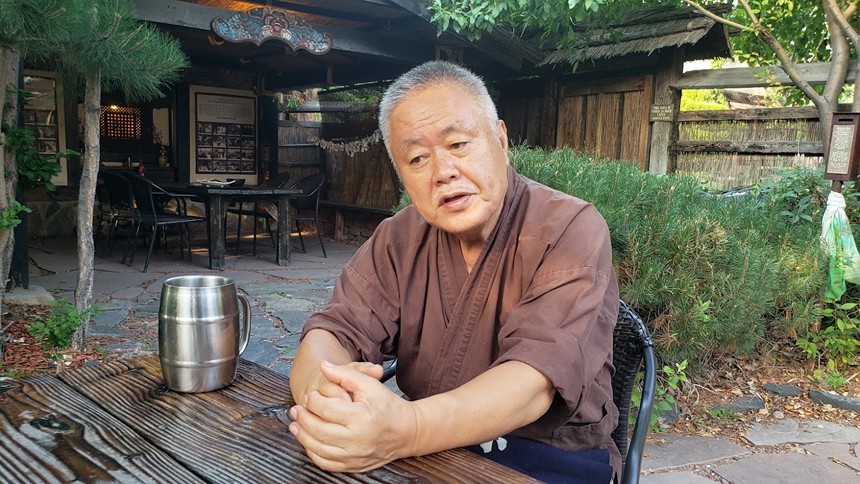 In early January, Homma announced another temporary closure, citing the surge of the Omicron variant and concern for the safety of staff and guests. But Domo remained closed even after the COVID numbers improved. And then, on February 22, a BusinessDen story about a developer seeking rezoning for the property that currently houses the restaurant and dojo sparked concern that Domo could disappear.

Now, Homma has responded in a lengthy post on the restaurant's Facebook page. "While these past two months have not been easy, I have been able to recharge during the 2 month-long break," he says, "which has been the first time-off in the last 25 years, and in fact, I took advantage of this time-off to get married in Thailand. I think the effect from having gone viral on TikTok has subsided by now and the level of concerns for the Omicron seems to have lessened lately, and hence, I am thinking of re-opening the restaurant soon."

But, Homma continues, he'd long been planning to retire at age 70, and he's now 72. In addition to the restaurant and dojo, he is devoting much of his time and attention to "the orphanage and boarding school for refugee children of the Karen People from Myanmar that I founded," he notes. As a result, when Domo does reopen, expect limited hours to return, as well as "a more focused approach than before." Domo is one of Denver's most stunningly appointed restaurants, with a Japanese country house motif.
Danielle Lirette

According to Homma, Domo's current closure is not related to the potential development, though he notes that he's in negotiation with a potential buyer. "While I don’t know currently how the negotiation will evolve to be in the near future," he writes, "I can say that I’m not being forced to move and that positive progresses are being made steadily in the negotiation process with mutual trust between the parties."

And if Domo does eventually shut down for good? "I would be planning a grand farewell party by inviting close and regular customers who have supported the restaurant over the years," he concludes.

Until then, though, Homma is looking forward to spring blossoms in the garden, and to welcoming back Domo's many loyal fans.
KEEP WESTWORD FREE... Since we started Westword, it has been defined as the free, independent voice of Denver, and we'd like to keep it that way. With local media under siege, it's more important than ever for us to rally support behind funding our local journalism. You can help by participating in our "I Support" program, allowing us to keep offering readers access to our incisive coverage of local news, food and culture with no paywalls.
Make a one-time donation today for as little as $1.