One of the Brew Tour events was a Harry Potter trivia night. Hutch Tibbetts, Douglas County Libraries
Douglas County Libraries has relaunched its Brew Tour, partnering with local breweries and coffee shops to deliver events and raise awareness for the libraries and local businesses. The revamped tour, which started August 1, has been a massive success so far, drawing 1,500 visits in just the first sixteen days.

Originally started in 2014 and continuing yearly through 2017, the Brew Tour went on hiatus for the past four years. "The brew tour started as a National Library initiative to get folks thinking about libraries in different ways," says Kerri Morgan, special events manager for Douglas County Libraries. "It was really popular [in 2017], but we felt like it really ran its course, as we were seeing a lot of the same people over and over again." That, combined with the national initiative ending, convinced the local library team to end the program.

But in 2021, during the strategic planning period, Douglas County Libraries began looking at ways to get folks back into the libraries, as in-person visits weren't bouncing back entirely. "We also wanted to find a way to help community businesses that were hit hard because of COVID," adds Morgan. The team decided to relaunch the Brew Tour, but with some important changes.

"The last time we did the tour, it was analog," Morgan notes. "We've gone digital, and we put a lot more thought and intention behind how we're marketing and promoting it to library folks." The team has been promoting the Brew Tour at local festivals since early June, starting with the Highlands Ranch Beer Festival, which happened right outside the Highlands Ranch Library. Besides festivals, local posters at various venues and newsletter blasts have helped promote the tour. None of those outreach efforts, however, can compare to the power of people talking to each other. "Really, the word of mouth has been what has helped this program take off the most," says Morgan. 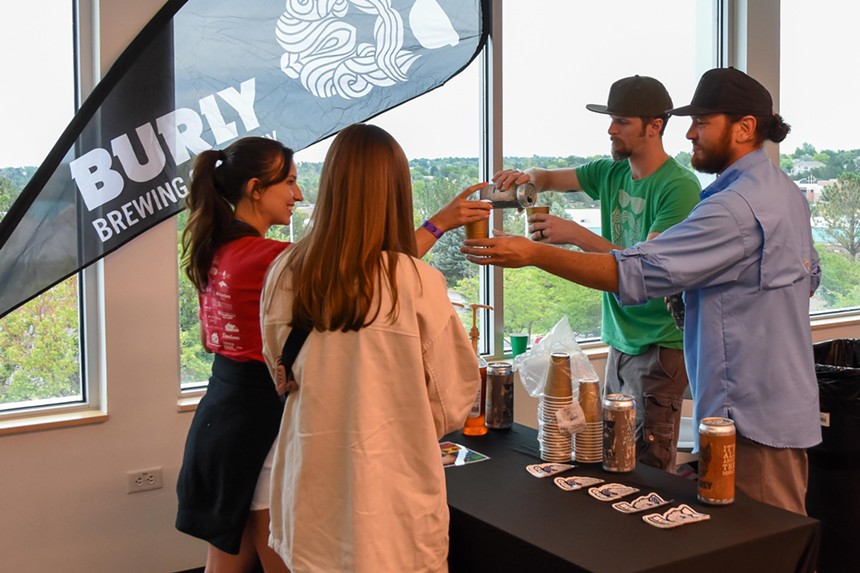 Brew Tour partner Burly Brewing was on hand for DCL's first tour event, Harry Potter Trivia.
Hutch Tibbetts, Douglas County Libraries
The early success hasn't been all that surprising to local breweries. All eight that participated in 2017 gave a resounding yes when Morgan approached them about the 2022 fest. The 1,500 visits and almost 2,000 unique user sign-ups in just over two weeks to start is likely double those of any prior year, so it's clear that there is a strong appetite for the event, and that the promotion and execution has been well received.

"For me, books and craft beer are two of the best things on the planet," says Downhill Brewing co-founder Jake Minturn, whose brewery is a tour partner. "This was a no-brainer for us to join the program," he continues. "Readers often like learning new things, and if that new thing is a lesson in craft beer, it becomes more fun and immersive for everyone. We want people to know the historical significance of craft beer and how much work and thought goes into the products we brew."

The library is using Beanstack, its summer reading software, as the program interface. Users, which can include adults from outside of Douglas County, create a login that immediately earns them a point. They then have a wide array of events and visits to local breweries and coffee shops available, allowing them to earn additional points. Fifty points gets you a silicone pint cup, while a T-shirt is 75 points, and a full 100 points unlocks a hoodie. With a visit to a brewery partner earning five points and attending a special event at one of the breweries or libraries being worth ten, it's pretty easy to accumulate points. There are also side challenges, such as the Coffee Challenge, which awards a stainless steel book lovers' travel tumbler for visiting all three coffee shops. The program runs through the end of September, with a grand-prize drawing happening in October. The winner of the drawing will receiving a premium stainless-steel growler, with free growler fills twice by each brewery, as well as free coffee.

The early success, combined with government budgets being planned well in advance, means that Morgan is already planning the 2023 Brew Tour. With such strong participation from the community in the tour, she hopes that she can recruit even more businesses next year. "Once the event ends, we're going to get feedback from participants, breweries and coffee shops to see what they did and didn't like," says Morgan. "We'll also review which businesses were the most visited, and we can translate that into dollar amounts to really make it clear how much this program has boosted sales to individual business."

With how popular the event has been, there will likely be more businesses eager to participate in 2023.
KEEP WESTWORD FREE... Since we started Westword, it has been defined as the free, independent voice of Denver, and we'd like to keep it that way. With local media under siege, it's more important than ever for us to rally support behind funding our local journalism. You can help by participating in our "I Support" program, allowing us to keep offering readers access to our incisive coverage of local news, food and culture with no paywalls.
Make a one-time donation today for as little as $1.