Downpours Gets Into Coffee Roasting to Go With Housemade Pastries

Downpours makes baked goods fresh daily. Facebook/Downpours Coffee
Michael and Maria Hammerquist, the husband-and-wife team behind Downpours Coffee, have seen the Berkeley neighborhood around their coffee shop change drastically in the five years since they opened. In fact, they've seen the city of Denver transform over their years of living here — all of Maria's life and most of Michael's.

Maria's father, Ron, always wanted to have a family business. And as a second-generation Denver resident, he wanted that business to be focused on community. Upon retirement, he decided the best way achieve these goals was through a coffee shop. The location at 3937 Tennyson Street had been home to a slew of businesses, most recently the Winey Bean coffee shop, before the family took over in 2013. The Hammerquists named Downpours after their first date. "It was a torrential rainstorm, and the streets flooded for a brief time," explains Michael. "That's something that's stuck in our mind."

They opened a second Downpours cafe a year and a half ago at 1200 Clayton Street, in what had formerly been a Dazbog and then Genesee Coffee Shop. "We like being part of a neighborhood and going into a building that already has character," says Michael. "We like the quirks that come with a worn-in-shoe type of location." They're on the lookout for a space to become the third Downpours, although Michael admits it's a difficult market in Denver. 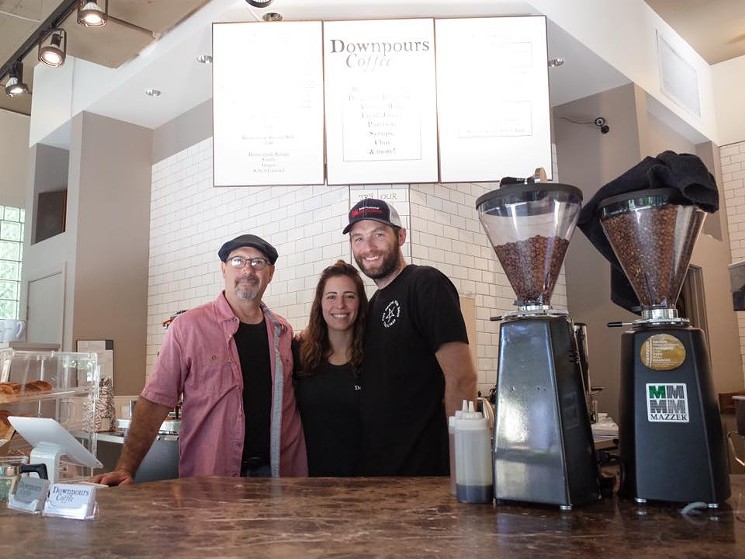 The Hammerquist family at their Congress Park coffee shop.
Facebook/Downpours Coffee
That thoughtfulness carries over into their business model. Downpours pays attention to the details by making most of its baked goods from scratch. However, it wasn't part of the original plan to operate a commercial kitchen. According to Michael, they ended up doing so out of necessity. After struggling to find a baker who could deliver pastries before opening, they started to make burritos in the cafe. Demand soon caused them to outgrow that operation, so they expanded food production into an off-site commercial kitchen. Now, Downpours makes all the almond milk, juice, burritos and pastries sold at the two locations. "It was a long learning curve where we were throwing stuff away every day for six months," recalls Michael. "Now, because we have the ability to, we insist on making everything fresh daily."

Downpours serves coffee from Commonwealth, Corvus, Sweet Bloom and Novo. "We think the roasters that we offer are some of the best in the world. Denver's pretty spoiled in that respect," says Michael. While they acquired a roaster three years ago, they only began operating it within the past year. "Are we gonna be better than the four roasters we've been using? Probably not, but we think we can get close," says Michael. "Buzz Kill" is the first Downpours roast available; it's a decaffeinated coffee, but there will soon be more options to come. While Downpours is locally owned and operated, its competition across Tennyson Street is not, which means it's all the more important to the Hammerquists to deliver fresh-made, local food and beverage options as much as possible. And, notes Michael, it's what their customers want.

If you visit, expect fresh food and a small, neighborhood vibe. The shop on Tennyson is cozy and feels settled;  it's nearly always filled with people working or meeting for coffee. Downpours Congress Park sits off the street, with a large outdoor patio and a large garage door that opens when weather permits.

"We didn't know anything getting into it, and we had a lot of help along the way," says Michael. "The coffee scene in Denver is pretty collaborative. We got lucky that way, and we like to pay it forward."