The new Downpours coffee bar is running, but the seats will remain empty for now. Courtesy of Downpours Coffee
On Saturday, March 14, Downpours Coffee celebrated the grand opening of its third location, at 1085 South Pearl Street in Washington Park West. Just two days later, Mayor Hancock announced that all Denver bars and restaurants would be closed to dining-in at least through May 11.

Michael and Maria Hammerquist opened the first Downpours in the Berkeley neighborhood eight years ago, and since then they've added two more shops and a commercial kitchen to their business. The commercial kitchen allowed the company to make all of its food and pastries from scratch — and opening the newest location, long vacant, was like starting from scratch as well.

"This unit had been vacant for a couple of decades; the last thing I could find in the city's archives of licensing was a VCR repair shop back in the ’80s," says Michael, citing that as one of the reasons the buildout took longer, since the address needed to be rezoned and much interior work was required.

Downpours is continuing to bake pastries.
Courtesy of Downpours Coffee
Although they'd been offered opportunities to open a Downpours in a new development, the Hammerquists prefer to find older, lived-in spaces with built-in character. "We were able to be a little bit more creative; we incorporated some of the stuff that was already in there," he adds. That included exposing and restoring a brick wall and recovering some of the original woodwork that now accents the cafe's aquamarine-tiled bar.

With all of the work that went into remodeling and building the space and procuring the appropriate licenses, "there wasn't really a possibility to plan [the grand opening] in advance," the owner notes. "With the inspections, there's always delays."

Despite that, he was surprised by the turnout for the grand opening. "There was a line out the door for about five hours, which is pretty spectacular considering what's been going on lately — that people were willing to brave it, and just two days before the mayor's announcement." 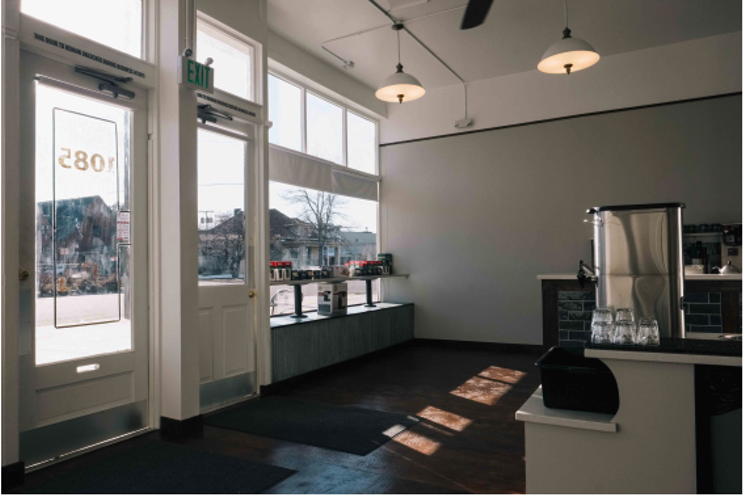 Courtesy of Downpours Coffee
Since the coronavirus outbreak and subsequent mandates from the government to close all bars and restaurants, Downpours has followed the trend of many coffee shops and cafes this week that switched to takeout and delivery only. "People have said, 'You chose like the worse time to [open],'" Michael adds. "But things were signed a long time ago. It's poor timing, of course, but we're trying to make ourselves [known to] the community. We're adapting to the needs of our guests as things continue to change. We're trying to abide by all the safety precautions that the state and local agencies have put together. People have this impression that everything's shut down, and in this instance at [this] location, a lot of people don't even know we're here yet."

So the Hammerquists have been employing social media to get the word out that the cafes are still open. "We think everybody's going to have to get out of the house occasionally over the next eight weeks, so we want to safely have an offering for them."

Michael says he understands why so many cafes like his have decided to shutter, as they aren't getting nearly the amount of customer volume they're used to. And although they've had to lay off over half of their staff thus far, they're doing what they can to keep Downpours' doors open as long as possible. "We're trying to keep as many of our staff employed as we can," he explains. "It's been a strange transition for everybody, and we still don't know what that's going to mean in the next month, two months, six months. It's not like things are going to go back to normal even if the ban is lifted in eight weeks. It's starting to sink in for all of us that things are going to get more complicated as time goes on and it's not a simple window for anything. There's been a lot of upheaval."

With the commercial kitchen, the Hammerquists have a few more options to maintain their business. "In addition to our usual menu, we'll also be cooking up some new items in anticipation of folks wanting something for dinner that they can pick up and pop in the oven — comfort food at a time when we most need it," the owner notes. Downpours hopes to roll out some savory new meal kits this week that people can bake from the comfort and safety of their own homes.

For now, all three Downpours cafes are open with reduced hours, from 7 a.m. to 11 a.m. seven days a week. "If coffee isn't essential, what is? We will continue to follow guidelines from the city and hope that we can be a source of respite for the community," Michael says. "Denverites should be able to come out and get food from us, so we'll see if they do."
KEEP WESTWORD FREE... Since we started Westword, it has been defined as the free, independent voice of Denver, and we'd like to keep it that way. With local media under siege, it's more important than ever for us to rally support behind funding our local journalism. You can help by participating in our "I Support" program, allowing us to keep offering readers access to our incisive coverage of local news, food and culture with no paywalls.
Make a one-time donation today for as little as $1.