A Federal Case Redux: A Decade of Dining Along One of Denver's Most Delicious Streets 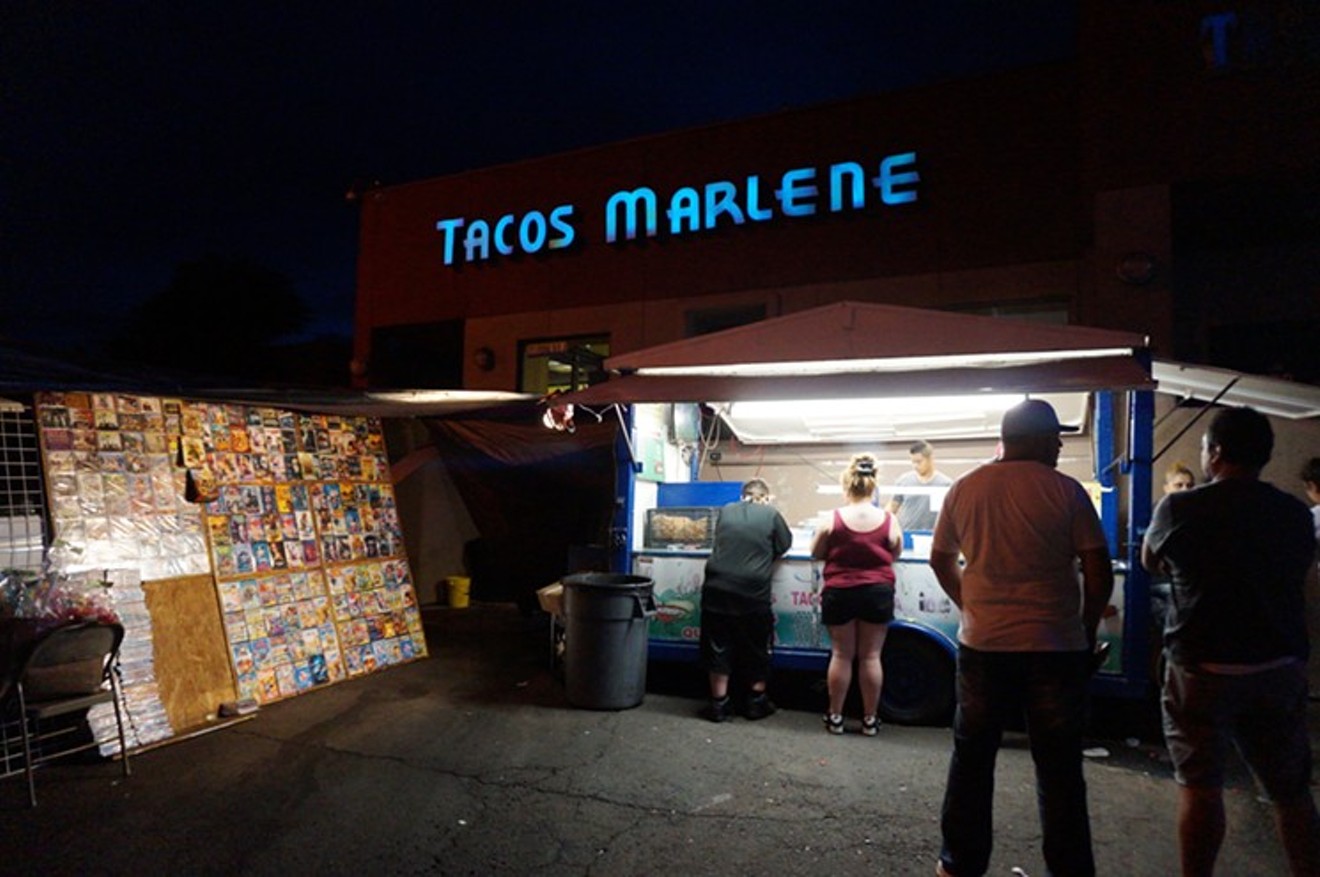 Tacos Marlene gives Federal Boulevard a big dose of street cred. Mark Antonation
“Wait, is that place new?” I shout, pointing with one hand while jerking the steering wheel sharply to veer into the parking lot of a Federal Boulevard strip mall.

This is as common an occurrence now as it was ten years ago, when I dove face-first into an adventure that changed how I ate, how I thought about restaurants, and how I felt about Denver as a food city. In 2012, I told Westword editor-in-chief Patricia Calhoun that I wanted to eat at every restaurant on Federal Boulevard — and get paid to do it. Surprisingly, she agreed.

My pitch was a weekly series in which I’d eat at and report on a new restaurant each week, starting at the southern edge of Denver near West Hampden Avenue and working my way up to the border between Denver and Adams counties at West 52nd Avenue. The goal was to visit every restaurant — minus the national chains — in geographical order. How long would it take, and how many dining rooms, bar counters and walk-up windows would I have to visit to complete the assignment? I didn’t do the math when I started, and I never looked too far ahead, because I wanted to maintain a sense of adventure and discovery.

But after eighteen months and 75 restaurants, my task was accomplished. I even went back and wrote a quick overview of a few places that had opened after I’d passed their addresses. What started with a simple idea — what’s the story behind all those eateries I drive past every day while commuting to work or running errands? — turned into a mental database filled with Vietnamese, Mexican, American, Thai and Chinese dishes, many of which I’d encountered for the first time and perhaps would never have ordered if not for my mission.

At first I wrote a lot about potholes and traffic; that part of Federal hasn’t changed much despite years of construction to add lanes, build medians and improve intersections. Pedestrians still have a scary time crossing all those traffic lanes, though at least the medians prevent cars from driving down the middle of the street as they attempt to merge with traffic or turn in to the parking lot of their destination.

But traffic indicates commerce, and commerce needs to be fed.

Despite two-plus years of COVID economy, most of the restaurants that were open in 2012 and 2013 are still serving food. Notable exceptions include the Tacos y Salsas at 910 South Federal Boulevard, once a favorite late-night destination for the city’s restaurant workers; and T-Wa Inn, at 555 South Federal, which was Denver’s first Vietnamese restaurant. Tacos y Salsas slowly faded, the menu and level of service dwindling until one day the doors never reopened; it’s now Mazatleco Mariscos under the same ownership. T-Wa Inn closed in 2014, perhaps a victim of the popularity of Vietnamese cuisine that the restaurant helped inspire. With so much competition, T-Wa’s classic, French-inspired fare no longer stood out as unique. The building went through several changes as a string of Mexican eateries but has returned to its roots: It's currently Saigon City Restaurant. Have a burrito baby at Cafe Chihuahua, which reopened recently under new ownership.
Mark Antonation
Farther south, Newbarry’s called it quits at 2995 West Jewell Avenue at the beginning of the pandemic after more than seventy years in business. The odd, rambling building (it’s clear that the place underwent several expansions during its lifetime) is now home to a Mexican seafood joint. And the Medina family, who had operated Cafe Chihuahua at 2250 South Federal since 1974, sold the restaurant to new owners, who installed a fast-casual business model and streamlined the menu. You can still get a pregnant burrito (stuffed with a beef enchilada); time will tell if the recipes live up to the great neighborhood fare the Medinas served for so many years.

But many old favorites are still thriving, and there are even some hip new businesses opening in areas where gentrification has taken hold in surrounding neighborhoods. I’m often asked about my Federal Boulevard favorites, and I just enjoyed a delicious bowl of bun bo Hue at one of them — Pho Duy, at 925 South Federal, which was packed full of satisfied slurpers during a recent Friday lunch.

Another excellent choice for noodle soups and other Vietnamese fare is Now Pho, at 1195 South Federal, which was called Pho Le when I wrote about it in March 2013. The restaurant changed hands in 2018, but the quality continued on, and the menu has even improved in many ways, with innovative approaches to traditional dishes and hard-to-find bites, like a sizzling platter of banh bot chien, fried nuggets of chewy rice cake held together with omelet-style eggs. 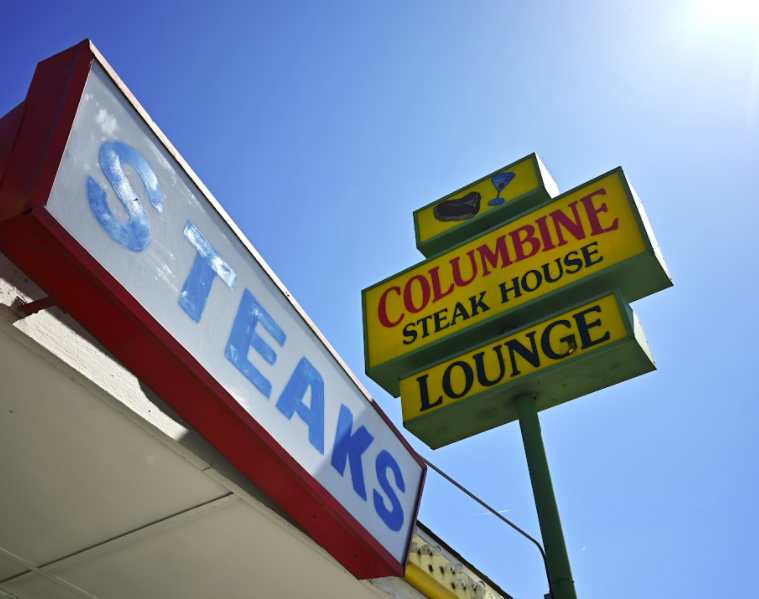 Erik Rangel
My short list of the top spots to visit if you’re new to Denver (or just haven’t explored much of this street) also includes New Saigon Bakery, Suvipa Thai, the Federal Bar & Grill and Columbine Steakhouse — which, given the state of old-school eateries in Denver, you should visit as soon as possible, because it feels like the kind of place that could close at any time, despite the always-packed dining room.

And, of course, there’s Lao Wang Noodle House. Owner Tse-Ming Wang passed away a year ago, but his wife and son have kept the tiny noodle shop running for customers who can’t get enough of their crispy-bottomed pot stickers. I can still hear Wang’s voice admonishing my table to “Eat them now before they get too cold!” after we hesitated a moment too long when he served us a steaming basket full of soup dumplings.

But when the conversation turns toward naming my favorites, I try to turn the tables. I like to find out what other people are looking for and then steer them in the right direction. Hunting for the perfect banh mi? You can’t go wrong with a slight detour down Alameda Avenue to Vinh Xuong Bakery, where owner Duc Huynh carries on the family business started by his parents at the original location (375 South Federal) some thirty years ago. But if you want to stick to Federal, Baker’s Palace is a banh mi purist’s dream, despite its humble exterior and lack of name recognition. Banh bot chien at Now Pho.
Mark Antonation
Or maybe you’re looking for a taste of Chinese cuisine beyond the takeout standards. You can find two Hong Kong-inspired eateries on Federal: the older Hong Kong BBQ, at 1048 South Federal, where whole roasted duck and char siu pork are the specialties; and the newer Happy Cafe, at 945 South Federal, where a bowl of beef noodle soup delivers high on the comfort scale.

While Federal Boulevard has lost some of its allure as prime taco territory in the city, food trucks like Tacos Marlene (really a food trailer in the parking lot of its own commissary kitchen), El Rancho Rodeo and Tacos 420 add to its street cred. And food truck operator Blaine Baggao recently added a sit-down version of his Filipino-New Mexican Adobo at 3109 Federal; you'll also find Adobo inside First Draft, at 1309 26th Street.

I could keep going, depending on whether you’re craving mole (yes, Tarasco’s is still the best), a big, messy burger (get in line at Grandpa’s Burger Haven) or pho (take your pick; they’re nearly all worth a visit). But don’t take my word for it: Get out there and experience Federal Boulevard for yourself.

Sure, you might hit some bumps in the road (or fall into some deep potholes) along the way, but the reward is a lifetime of eating opportunities.
KEEP WESTWORD FREE... Since we started Westword, it has been defined as the free, independent voice of Denver, and we'd like to keep it that way. With local media under siege, it's more important than ever for us to rally support behind funding our local journalism. You can help by participating in our "I Support" program, allowing us to keep offering readers access to our incisive coverage of local news, food and culture with no paywalls.
Make a one-time donation today for as little as $1.