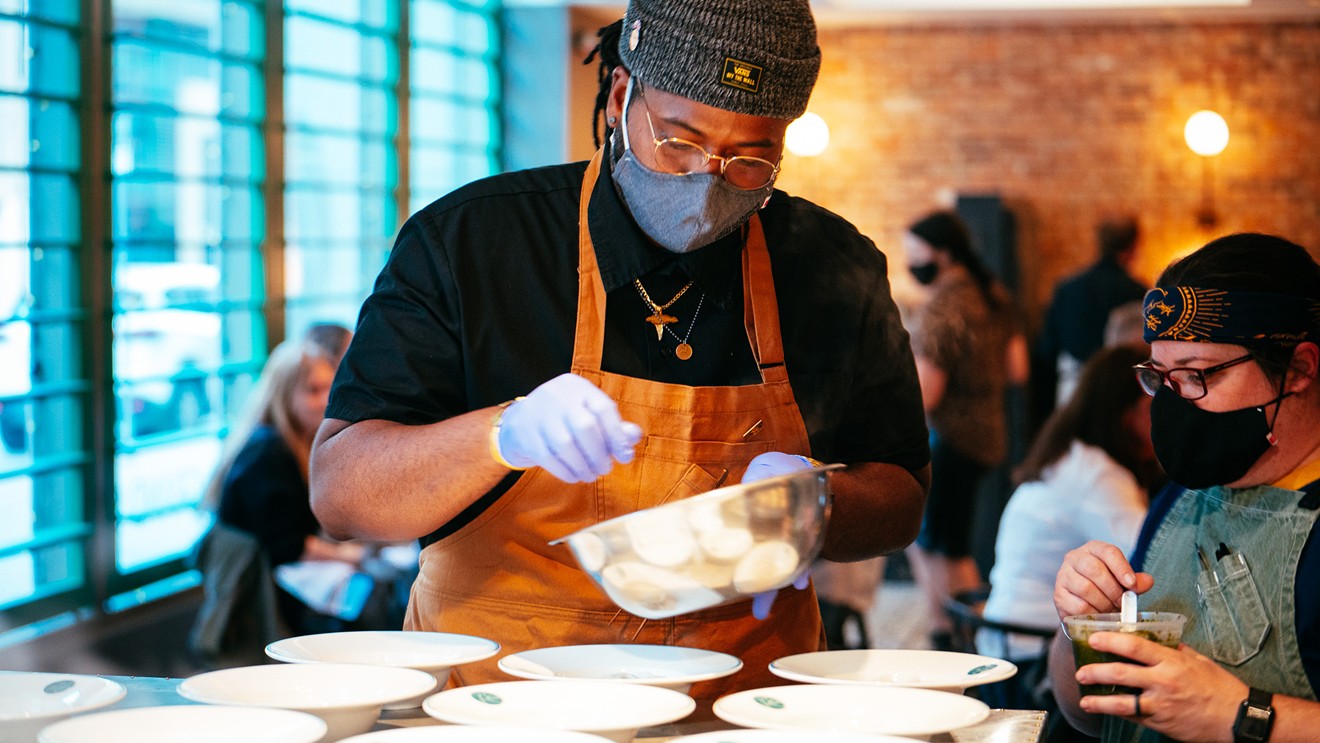 The Chef Kitchen will be a new chef residency program and restaurant at Freedom Street Social. Jeff Fierberg
Chef Tajahi Cooke wants to help chefs create without restriction at a new residency program called the Chef Kitchen. During month-long residencies, chefs will have the opportunity to experiment with and showcase new food concepts while receiving mentorship and financial support.

Cooke created the Chef Kitchen in partnership with Fireside at Five, a programming and marketing collective, and Freedom Street Social, an Arvada food hall that's set to open in the spring and will be the home of the Chef Kitchen. “Personally, I’m honored to be a part of this program that wants to make the [restaurant] business that we all work in better,” Cooke says. After reckoning with the trials of the pandemic, “coming back as a community is important.”

The Chef Kitchen is meant to be an incubator for seasoned chefs and an ever-changing culinary experience for patrons. During each month-long stay, the resident chef will have the opportunity to test out an original concept or bring a proven menu to a new audience. The chef will be responsible for creating a daily dinner menu Wednesday through Sunday and an expanded multi-course dinner on the first Friday and Saturday of the month. Applicants can be from anywhere in the country, but Cooke is particularly excited about bringing in chefs from Colorado.

The program is an elevated version of the monthly multi-course dinner that Cooke started with Fireside at Five earlier this year. The Supper Club was a way to slow down the restaurant experience and allow chefs to better connect with customers and engage in meaningful conversation, he explains. It will continue on the first Friday and Saturday of each residency.

Tajahi Cooke (second from left) started the Supper Club as a way to slow down the restaurant experience and allow chefs to better connect with customers.
Jeff Fierberg
The Supper Club featured Denver chefs such as Frank Bonanno, Natascha Hess and Jesusio Silva, and nearly every dinner sold out. Aside from providing the chefs with additional income, the Supper Club was able to donate some of the proceeds to Sophie’s Neighborhood, a nonprofit dedicated to funding research for multicentric carpotarsal osteolysis (MCTO), a rare progressive disease involving bone loss that Boulder chef Hosea Rosenberg's daughter, Sophie, was diagnosed with in 2020.

The Supper Club and Gertie Harris from Fireside at Five also introduced Cooke to Freedom Street Social creators Nick and Amie Costanzo, as well as partners Jeff Kaplan and Jon Morgan. (Cooke and his wife, Danielle, met their third partner, Cameron Cummins, later.) “We fed them, and they fell in love with what we do,” Cooke says.

The collaboration was further strengthened by shared values surrounding food and community passed down through generations.

Cooke, who lived his early years in Kingston, Jamaica, was exposed to world foods with his father, who was a tour manager for the likes of Michael Franti & Spearhead, the Marley family and the Wu-Tang Clan. He “opened up my eyes through travel and conversation and good food,” Cooke notes.

Even though he went to undergrad for psychology at Los Medanos College in California, Cooke chose to follow his passion for cooking, he explains. And after over a decade of working in kitchens, the chef has an extensive résumé. He served as the executive chef for Biju’s Little Curry Shop, Mother Tongue, The Kitchen and Next Door American Eatery, as well as head chef consultant for BRUTØ. He also founded Ms. Betty’s Cooking with Danielle in 2016.

But despite the successes, Cooke says there were many years when his low hourly salary wasn't enough to pay the bills. He recounts weeks when he’d come home after working overtime and just stare at the dismal checks.

Cooke hopes the Chef Kitchen will allow chefs to create and experiment without having to worry about paying their bills.
Jeff Fierberg
“You understood that you weren’t in this for the money,” he says. But “if you’re not happy outside of the workplace, how can you come in and cook your best food?”

Those experiences led him to dream of creating a residency such as the Chef Kitchen. The program will pay each chef $1,500 per week in addition to providing all food and beverage supplies and a front- and back-of-house staff. Cooke says the team has already priced out how the restaurant’s revenue can cover all costs through proper management.

“I want to continue to invest in our chefs and actually take care of our people,” he says, a goal that is part of a bigger mission to reinvent the way the restaurant industry works.

But the residency is also meant to allow chefs to reconnect with their love of cooking. “I want chefs to come in with a sense of wonder, a sense of imagination,” Cooke adds. “I just want passion, joy, love, creativity [and] youthfulness. I want the community to come out and feel that."

In addition to the residency, Cooke will use the kitchen to serve a daily breakfast as the BKFST Club and as a venue to host classes. Cooke envisions leading chefs, farmers and purveyors teaching about subjects that range from milling wheat to beekeeping to knife sharpening. Additional programming will include workshops with local culinary students, kids' classes and tastings.

It’s all about working “in the best way we can...to create betterment for the next generation and make it comfortable for us all,” Cooke says.

Applications for the residency program opened on November 15 and will close on January 31. Chef Cooke will inaugurate the series as January’s resident chef. To learn more about the Chef Kitchen, visit freedomstreetsocial.com/chef-residency-program.
KEEP WESTWORD FREE... Since we started Westword, it has been defined as the free, independent voice of Denver, and we'd like to keep it that way. With local media under siege, it's more important than ever for us to rally support behind funding our local journalism. You can help by participating in our "I Support" program, allowing us to keep offering readers access to our incisive coverage of local news, food and culture with no paywalls.
Make a one-time donation today for as little as $1.
Claire Duncombe is a Denver-based freelance writer who covers the environment, agriculture, food, music, the arts and other subjects.
Contact: Claire Duncombe