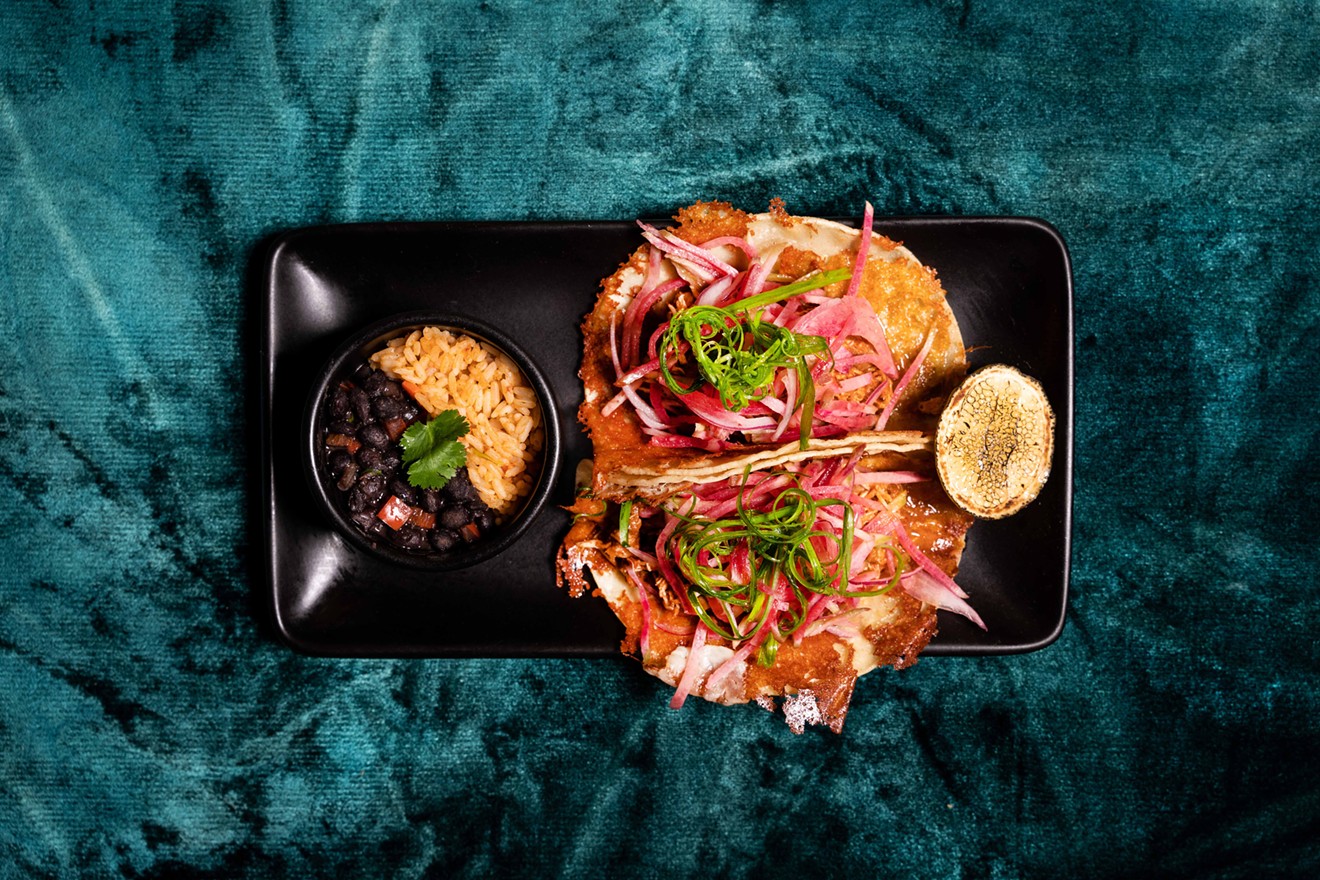 Tacos are only a small part of the menu at Perdida. Courtesy of Perdida
Park Burger and Birdcall count among Denver's most recognizable restaurant brands, but the names behind them are a little less well known. Philippe Failyau founded the first Park Burger, at 1890 South Pearl Street, in 2009, and then added Park & Co. in Uptown. Peter Newlin soon joined the team to oversee operations, helping grow the business to three other Denver outposts (in Highland, RiNo and Hilltop). Since then, they've also opened three Birdcall chicken sandwich eateries and two Homegrown Tap & Dough pizzerias. But one thing was missing from their stable: a full-service, destination restaurant.

No longer. Perdida opens today, February 8, at 1066 South Gaylord Street, in the former home of the Tavern Wash Park. 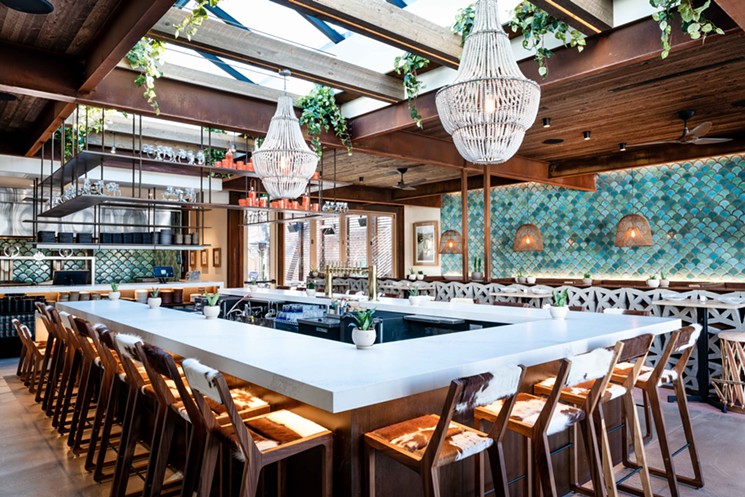 Bar seating comes with a view of the open kitchen and its wood-fired grill.
Courtesy of Perdida
"Philippe and I haven't opened a full-service restaurant in five years," says Newlin, but he notes that they've been planning Perdida for several years and got serious about it after a 2018 trip to Baja California.

On that trip, Failyau and Newlin drove the entire length of the Mexican peninsula (which is divided into the states of Baja California and Baja California Sur), from Tijuana to Cabo San Lucas. Along the way, they ate at as many restaurants and taquerias as they could and visited markets to understand the produce and seafood of the coastal region. That year, they also purchased the building where the Tavern had operated for a decade.

Failyau built Perdida's menu around the food of Mexico's Pacific coast, but he says it's not exclusively Baja-style, since the country's cuisine is so vast. But many of the dishes will be cooked on a wood-fired grill in the open kitchen, adding flavor as well as a little entertainment for customers. 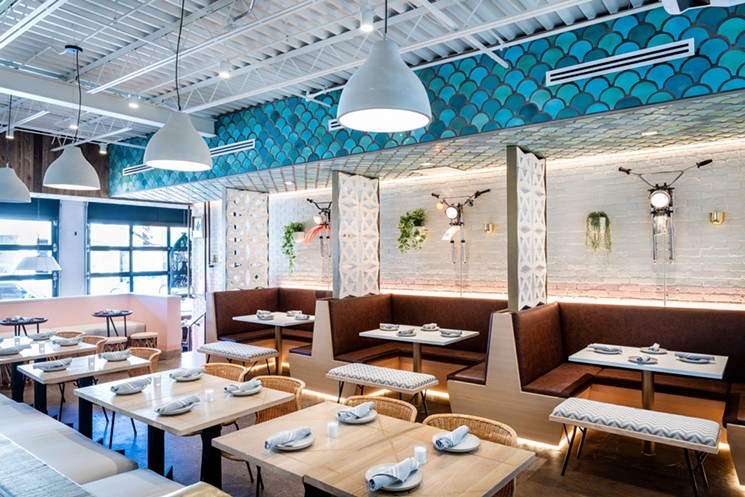 Perdida's decor mixes Denver DIY with handmade Mexican furnishings.
Courtesy of Perdida
The Tavern's kitchen was in the basement of the building, so one of the biggest projects was moving it to the ground floor, Newlin says. In fact, the entire space has been transformed, with a bright palette, ocean-colored tile and handmade accents. "We really wanted to create amazing energy — not necessarily a club, but a place with amazing nightlife," he explains. "It's literally our life's work in one restaurant."

Nearly all of the decor is either handmade in Denver or sourced from Mexico, he adds, and several Denver firms, including Surround Architecture, Fin Art and HouseFish, were in on the project. You'll see cowhide bar stools, light fixtures built from the front forks and handlebars of motorcycles, vibrant murals and a turquoise 1960s Volkswagen bus on the back patio. "We wanted to make people feel like they're at a beach bar without being cheesy," Newlin says. 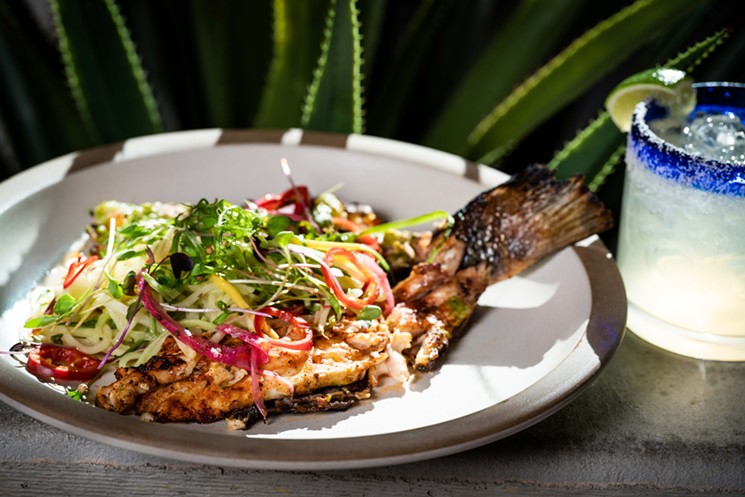 Whole striped bass zarandeado.
Courtesy of Perdida
The menu itself includes beachy food like fish and shrimp tacos, as well as familiar staples such as fajitas, pozole and enchiladas. But there are also a few higher-end dishes, including ribeye carne asada, whole bass zarandeado (marinated, butterflied and grilled over wood), and scallops with rice fritters and guajillo coconut sauce. But you could easily stick with appetizers, too, whether you order yucca fries, tuna aguachile, crispy Brussels sprouts or fried calamari while sampling your way through the bar's fiesta-ready cocktails. In addition to margaritas and palomas, there are several signature and large-format cocktails, with some — such as the Chupitos and the Shotopus — served in unique barware for a more interactive drinking experience.

In addition to Perdida, Failyau and Newlin have several other projects in the works under their Gastamo Group umbrella, including upcoming Birdcall locations in Colorado Springs, Boulder and Denver's Happy Canyon shopping center, and another Homegrown Tap & Dough in Ken Caryl.

Perdida is now open for reservations from 11:30 a.m. Monday, Tuesday and Wednesday; 11:30 a.m. to 11 p.m. Thursday, Friday and Saturday; and 11:30 a.m. to 10 p.m. Sunday. Visit the restaurant's website for a complete menu and online reservations, or call 303-529-1365.
KEEP WESTWORD FREE... Since we started Westword, it has been defined as the free, independent voice of Denver, and we'd like to keep it that way. With local media under siege, it's more important than ever for us to rally support behind funding our local journalism. You can help by participating in our "I Support" program, allowing us to keep offering readers access to our incisive coverage of local news, food and culture with no paywalls.
Make a one-time donation today for as little as $1.