The Horror Bar window was tagged at the end of June, as allegations surfaced. Special to Westword
In late June, after a slew of social media posts accused owner Nate Szklarski of sexual harassment and worse, the three-month-old Horror Bar at 5126 East Colfax Avenue went dark temporarily, then closed altogether as Szklarski moved on.

Now it's being resurrected as Slashers Denver, under new/old ownership.

Joshua Schmitz, an established Denver entrepreneur who's known for his eclectic concepts, including the Hidden Gems that recently opened in Larimer Square, has the lease on the space, which he ran for several years as Bellwether, a popular coffee and cocktail spot. After a series of successful, spooky pop-ups put on by Szklarski, Schmitz handed the spot over to Szklarski earlier this year, allowing for its transformation into the fulltime Horror Bar.

"The truth is I just didn't really have time to keep track of Bellwether at the time," explains Schmitz. But now, he's ready to take it back.

The space is currently undergoing renovations; Schmitz expects the doors to Slashers Denver to open in August. In the meantime, he plans to double the bar's seating capacity and is making changes in both the interior and exterior decor; he also wants to incorporate ideas like augmented reality.

A handful of former Horror Bar staffers plan to join the rebrand. "Some of the staff from Horror Bar did choose to leave after everything that happened — which we totally understand — but others chose to stay, and anyone who left that's interested in returning is more than welcome to get back in touch with us," Schmitz says.

The Slashers Instagram site — cleared of anything related to the Horror Bar, but keeping its followers — promises that this will be a "brand new dive craft experience," where people will be encouraged to "dress however you want, listen or watch whatever you want, and be whoever you want."

Slashers will continue Horror Bar's legacy of horror flicks and themed cocktails. "Our goal is to create an industry standard in crafting a unique experience paired with rad staff to enforce safe and fun practices, making a one of a kind space that us weirdos need," the Instagram announcement promises. 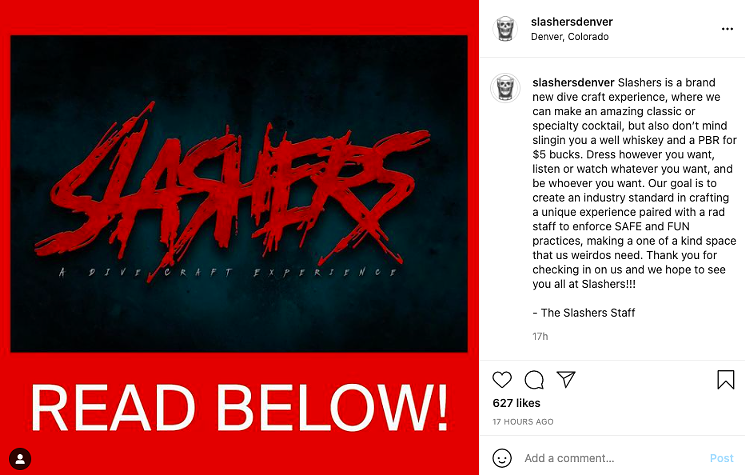 The new name and concept of the bar was announced on Instagram.
Slashers Denver Instagram
"The reality is that we're trying to move forward in a positive direction with the new concept and making many changes to ensure the future safety of staff and guests," Schmitz says, adding that a portion of sales at Slashers will go towards "several women's non-profits."

According to Schmitz, Szklarski has removed all of his belongings from the premises; Schmitz says he hasn't heard from him in a week.

"I don't believe we are responsible for the failures of the previous owner," Schmitz concludes. "We're trying to move forward, not go backwards."
KEEP WESTWORD FREE... Since we started Westword, it has been defined as the free, independent voice of Denver, and we'd like to keep it that way. With local media under siege, it's more important than ever for us to rally support behind funding our local journalism. You can help by participating in our "I Support" program, allowing us to keep offering readers access to our incisive coverage of local news, food and culture with no paywalls.
Make a one-time donation today for as little as $1.