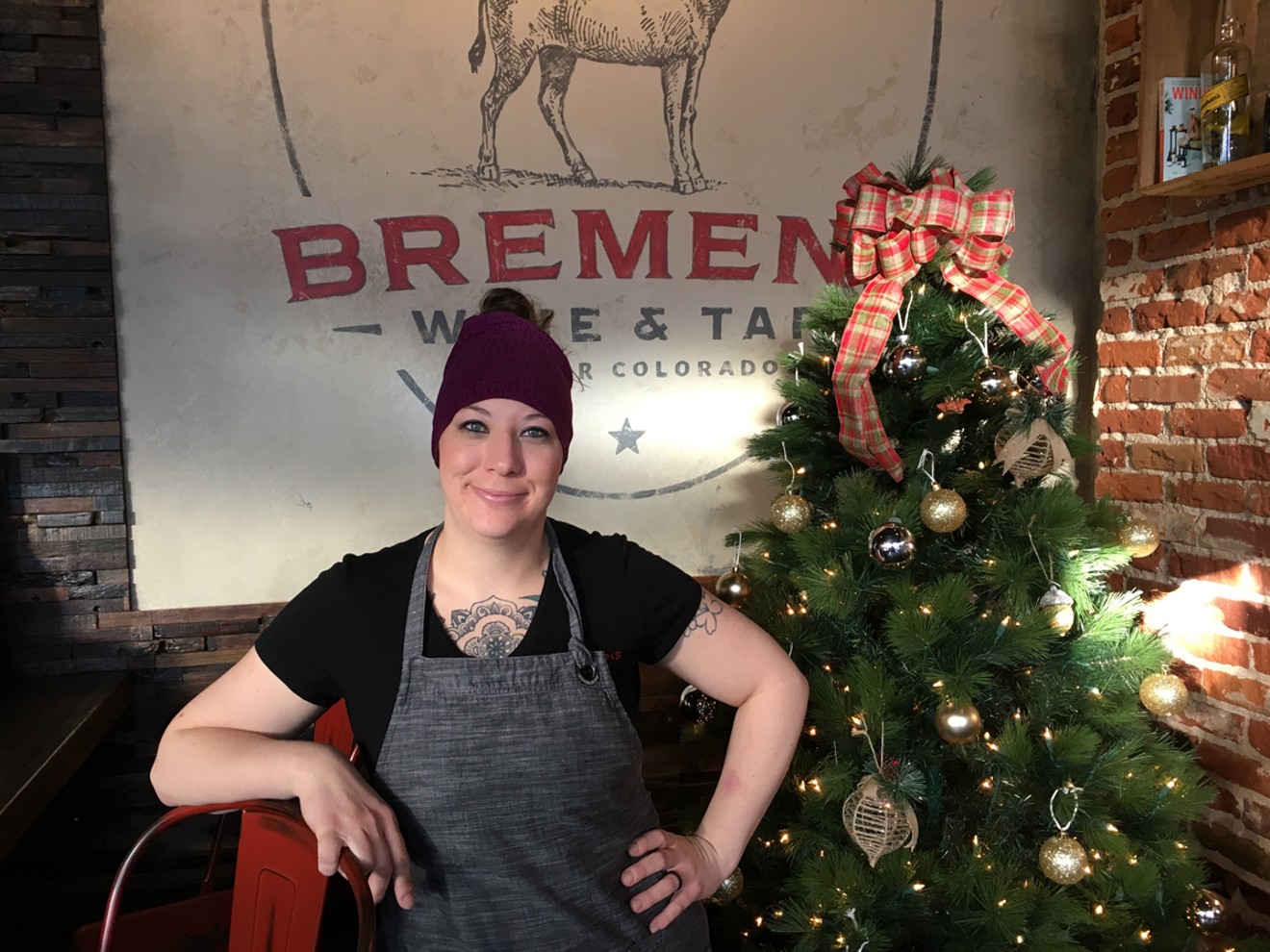 Isabel Ranney takes an herbalist approach to cooking. Laura Shunk
Isabel Ranney didn’t set out to become a cook: She was working the front of the house at a Steamboat restaurant but constantly telling the chef about dishes she was working on at home. One day he asked her if she was interested in moving to the back of the house, and “it was obviously a calling,” Ranney says. Fueled by an interest in environmental science and nutrition, she gravitated toward restaurants that could teach her seasonal cooking. After she took over the burners at Bremen’s in August, she integrated those lessons, along with the herbalism she’d studied in college, into the kitchen. In this interview, she talks about her drive to consider the planet in her cooking, working at a woman-owned, women-run restaurant, and the herbs you should be eating now.

Westword: You took over as executive chef at Bremen’s in August and unveiled a new menu in October. What did you adjust here?

Isabel Ranney: There was something missing between the front and back of the house. We had all this wine and beer on tap, and cocktails, so I matched that with what was coming out of the kitchen; I made it a little more bistro-like. I’m also into herbalism, so I like to mix that into my food as well. My mom raised us to know that food is medicine, so it’s about how can you create good food that’s healthier. And I try to keep things as close to the restaurant as possible (though I’m getting prosciutto from Italy) and work with as many local vendors as possible.

Talk a bit about herbalism. What is it?

It’s something that’s always driven me. I dipped my fingers in nutrition and environmental science — that’s what I went to college to get a degree in — so I’ve known I have this inner calling. That has determined what kind of chef I am. By definition, herbalism is using herbs for medical properties. For instance, we use elderberries a lot right now. They help with colds and flus; they’re anti-viral and boost your immunity. Sage is good for sore throats; it boosts the immune system. These are also fall-menu things. It’s cool to see how seasons align with what our bodies need.

When you write a menu, do you think about herbal properties first?

I make a list of all the things I want to use, and then my mind connects them together. We use Western Daughters [butcher shop] for a lot of stuff. [Co-owner] Kate [Kavanaugh] is awesome, and I love supporting someone else in our neighborhood. We’re doing sage polenta, pork chop and cranberry gastrique and charred kale. It reminds me of Thanksgiving and holidays, but you’re still getting cranberries and sage and rose. Rose’s spirit medicine would be love, and everyone needs a little more love in their life, especially right now.

A vegetarian "tartare" is made with raw asparagus, pear, avocado and tangerine oil and served with crispy house lavash at Bremen's.
Mark Antonation
Any other herbs or foods with healing properties that people should be eating right now?

Garlic is really good. Herbs that help immunity, like sage, thyme, rosehips, rose, elderberry, rosemary — rosemary is good for memory, too. Sage and thyme are really good with digestion, which helps our bodies function a little better this time of the year. When we shift into spring, we use nettles, because they’re really good for allergies.

Is herbalism a direction you’d like to see other chefs move?

We’re all starting to move in that direction. It’s a fine line: Sometimes you just need to baste the duck breast in butter. But where is the butter coming from? Is it full of omega-3s and [other] fatty acids? Denver chefs are looking into that, and they’re being more aware of where things come from. Everyone’s becoming more aware. I love the Eat Denver group; everyone can come together, and there’s always a conversation going on. It’s not us versus them; we’re a collaborative group.

What else defines your cooking style, and how has it evolved?

When I first started cooking, I was working in a Pacific Rim restaurant — it was fancy Asian food in a white-tablecloth, fine-dining environment. That was in Steamboat, so we were closed during mud season. I never went to culinary school. Instead, I’d stage around Steamboat when our restaurant was closed. Brian and Katy Vaughn owned Bistro C.V. — and now have Low Country Kitchen here in Denver. Brian was the first person I had a conversation with where I really learned what seasonal cooking was. They printed the menu every day, and it was the first time I found out you could do that with food. It was the first place I saw molecular gastronomy and sous-vide. And I got to have conversations with all these people in the kitchen about food, and my mind was like, oh, my God, this is amazing. That’s developed through the restaurants that I’ve worked at. I helped my mom’s cousin open a restaurant in Washington; he wanted to do everything within 100 miles of the restaurant. The restaurant didn’t make it, but it was so awesome. I went to Tables; Amy and Dustin [Barrett, owners] are just amazing. I learned more about composting and seasonal menus. I was there for five years. My food is seasonal and local when I can get it; some things I can’t get. We have to consider price point, and it’s a very fine balance. I would love to have all local. I had a granola mom. We had to take our own grocery bags to the grocery store and buy organic before it was cool. Lamb "lollipops" served with housemade flatbread, mint crème fraîche and shaved onions with parsley at Bremen's.
Mark Antonation
Sounds like sustainability is as important to you as health.

I’m a mom, so it’s, how can I make sure the planet is still kicking when my daughter is my age? What’s my place in that? I have the biggest voice as a chef — I get to touch everyone’s plate. And, for instance, I read recently that there’s so much plastic in the ocean, there’s plastic in the seafood now. How do you deal with that as a chef? You make sure you’re using sustainable seafood. There are a ton of resources out there. You be an advocate. Each person has a voice, and that creates a bigger voice.

Bremen’s is a woman-owned, women-run restaurant, which seems like an important thing to note in a moment when we’re challenging the industry’s male dominance on a national scale. Is the role of women in professional kitchens evolving?

It’s evolving. When I started in the kitchen, my chef-owner said to me, “Women don’t belong in the kitchen.” It was my catalyst — I thought, I’m going to prove you wrong. I worked there for six months when he sat me down and said, ‘You’ve proved me wrong’ — although he didn’t say it so nicely. That’s something that’s always been a chip on my shoulder. It pushed me to want to get better. I’ve been lucky since then — the places I’ve worked in, there’s been another woman at the helm. Amy and Dustin are a nice balance. I’ve worked for a lot of husband-wife teams. Women can even be harder than men.

It’s been really awesome in this space. My husband is my sous-chef, and he’s my workhorse. The owner said, “I’m going to take this risk and let you hire your husband.” We’d like to have our own restaurant and space someday, so we get to grow together and grow Bremen’s together. It’s really neat to be in the space and evolving our food together, combining my vision with his vision.

We eat a pretty basic diet. Sometimes I’ll have mac and cheese with my daughter; sometimes we’ll create a real meal together. We just got married six months ago, so we got all these dream things, from a culinary perspective. We make a lot of pasta with red sauce — my daughter knows how to make pasta. We order a lot of takeout. Some times we’ll grab a protein from Western Daughters and take it home and cook it.

What’s always in your fridge or pantry?

Butter. Eggs and greens. Sometimes we’ll do eggs and greens for dinner. Both of us are nutrition-forward-thinking. Quinoa, lentils.

What’s your shift drink?
A glass of red wine — a nice pinot noir. Or whiskey, anything with whiskey in it. We don’t really do shift drinks here because no one’s really a big drinker. In a lot of kitchens, everyone goes out after work. Everyone here is more grown up.