Jesus Silva has a hit on his hands at the Golden Mill. Molly Martin
Three months after opening, the Golden Mill is buzzing mid-day on a sunny Tuesday. The food hall at 1012 Ford Street sits right on the bank of Clear Creek, and its rooftop patio bar, the only one in Golden, has an unobstructed view of the Coors brewery. Besides the rooftop spots, the best seats in the house could be the line of chairs on the main floor past the beer wall, which look directly out onto the flowing water.

While the self-pour beer wall and those views are noteworthy, the dining concepts from Jesus Silva are at the heart of the metro area's latest food hall. "The idea is to have ten different concepts in our portfolio," Silva explains. Placing concepts in that portfolio with him is Mark Shaker, the man behind Stanley Marketplace (where Silva formerly worked at Misaki Sushi) and Broadway Market.

Three of Silva's concepts currently serve eats at the Golden Mill: Sushi Sora, Tacos al Chile and Republik of Chiken. Happy Cones and Rolling Smoke BBQ (which also has a location at Stanley Marketplace) round out the food offerings.

"We just did a little change in the menus downstairs, and we added some things to the sushi bar," Silva says. "It's been great. People here like what we're doing. They love the space, they love the food."

As is the story at so many restaurants these days, the Golden Mill is still struggling to find new employees; a white sign with big red lettering reading "Now Hiring" has hung from the roof since the opening. But Silva says he feels good about where his team is and the food hall's bright future in Golden. "We've started building a lot of regulars," he notes. "A lot of locals have started coming in and having a lot of fun in this place. And we're having fun, too. It's hard to open a massive place like this one. It takes time to start enjoying this kind of pressure. But now we're there. We're enjoying the pace and the pressure, and we're ready for more."

And more is exactly what Silva is getting. The summer months bring a lot of tourists to Golden, which means more foot traffic at the Golden Mill. And he and Shaker recently opened three concepts at Milepost Zero, the food hall at the massive McGregor Square development by Coors Field. "We are taking over Wazee Coffee," Silva says, "and we're doing all the coffee and food there. Then we've got Tora Poke & Noodle House, and we're doing ice cream on the side [Pulpo Creamery] because the space is so big. We want to utilize the whole thing." 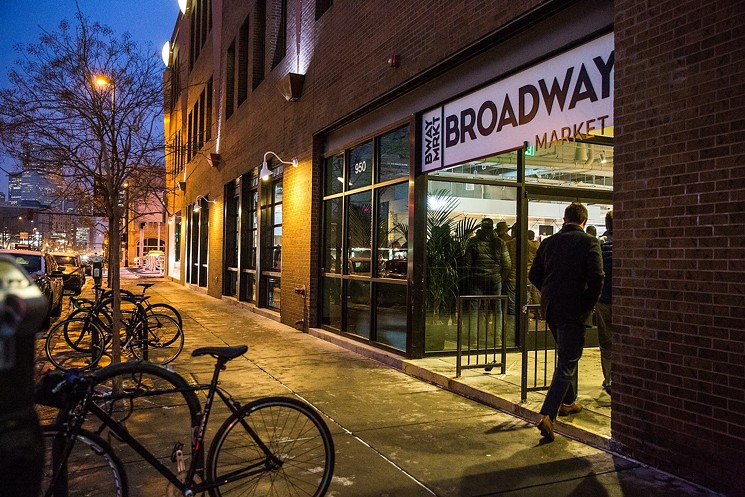 Broadway Market is planning to reopen September 1.
Danielle Lirette
Also in the works: the reopening of Broadway Market at 950 Broadway. The food hall closed on March 14, 2020, and remained shut until June 12, 2020, when it reopened with curbside pick-up and delivery and slowly eased back into limited-capacity operations. Then, in October 2020, it announced a winter hibernation with plans to reopen in 2021.

"September 1, [Broadway Market] opens back up," Silva says. "I'm so excited for that. I really like that space. I love that place, to be honest." But you should expect some changes when the doors do reopen, including the location of the bar. "The sushi bar is going to move to where the original bar was before," he explains, making it a more central focus, though the space will still include a full bar for cocktails, along with the self-pour beer wall.

As for the food at Broadway Market, Silva says he will have at least five concepts there: Sushi Sora, Tora Ramen, Republik of Chiken, Purgatory Pizza and Tacos al Chile. "That's the idea right now," he notes, adding that plans can change quickly when opening new restaurants, particularly in food halls.

As for the other vacant spaces, those plans are still in motion. "We're talking to some other people right now," Silva says. "Nothing is finalized yet."

Once Broadway Market is back up and running, Silva can turn his attention to another venture: Shaker is planning yet another food hall, this time in Westminster, where Silva will head up the culinary team. "That one is looking more like next year," Silva says. "Although 'next year' is getting pretty close now — that's scary."

Silva's not slowing down anytime soon, and that's actually something he's happy about. "I feel like this year, coming back after COVID, this is a time to grow, to keep working hard and to make all these things happen," he says. "There's a lot of opportunity out there, and it's time to evolve. For Denver, I think this is the time we've been waiting for. That pause is going to give [Denver's food scene] the chance to come back even stronger than it was before."
KEEP WESTWORD FREE... Since we started Westword, it has been defined as the free, independent voice of Denver, and we'd like to keep it that way. With local media under siege, it's more important than ever for us to rally support behind funding our local journalism. You can help by participating in our "I Support" program, allowing us to keep offering readers access to our incisive coverage of local news, food and culture with no paywalls.
Make a one-time donation today for as little as $1.