The business has been around in a few different forms since the summer of 2017. "We started with a food truck because that was more in reach for our family," explains Martinez, who runs La Rola with her mother, Maria Teresa Garzon, and her sister, Andrea Martinez.

"My mom always cooked amazing food. After my dad passed away, we wanted to take a different route in life and actually live out our dream to share our knowledge of Colombian cuisine," she recalls. Using her mother's and grandmother's recipes, La Rola gained fans, serving up items like empanadas, arepas rellenas and its signature Billionaire hot dog, which is loaded with a long list of ingredients including ham, bacon, pineapple and a quail egg on top.

"At first it was a hobby," Martinez says. "But it turned into a full-time job.  We each had our own jobs and all switched to full-time food truck operations." Catering, too, took off, and the trio shut down the truck for about a year to focus on private events. They also found an investor who offered to help the family open their own restaurant. "By the end of 2019, we couldn't find a space," Martinez says. "Then we came across Zeppelin Station." 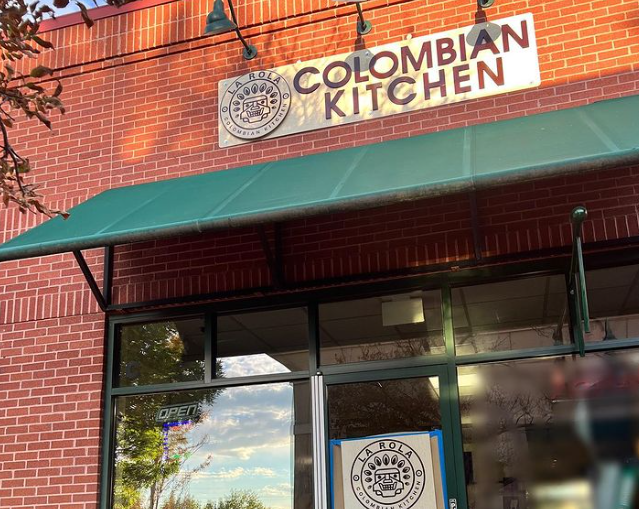 La Rola opened in Littleton on September 21.
La Rola Colombian Kitchen/Instagram
La Rola's stall at the RiNo food hall opened in February 2020. "We survived the whole pandemic, surprisingly," Martinez notes, by focusing on takeout and delivery and helping to feed those in need through a food drive in partnership with local nonprofits.

In January, the family found an available space in Littleton and was able to start working on opening there in April. But that month, new management took over at Zeppelin Station, which recently rebooted with five new food concepts. Initially, La Rola tried moving into a Cloud Kitchen facility, where it operated as a ghost kitchen, focusing on pickup and delivery. "That didn't go so well," Martinez admits, adding that the experience only lasted two months before "we decided to dedicate ourselves 100 percent to fixing up the space and getting it open."

La Rola's new, permanent home opened on September 21. "We had family and friends come help us fix it up," Martinez says. "It was a Mexican restaurant before, and it needed so much work. It had sat empty for a whole year. We put a lot of love into it."

The new space has also allowed the family to expand the menu a bit, adding appetizers to the lineup and  bandeja paisa, a traditional dish that is served on a tray stacked with items including rice, beans, plantains and pork belly.

Arepas are popular at La Rola.
La Rola Colombian Kitchen
Serving sizes are also bigger now. "We used to serve in to-go containers. Now that we have our own dishes, we can splurge a lot more for each dish," she explains.

The choice to move to Littleton rather than Denver or Aurora was driven by an increase in violence in those areas, Martinez says. After hearing about robberies, tires being slashed and windows broken, the family wanted to run their business in an area where they feel safer. "I know that for our food, people will come," she says of the fan base that La Rola has built over the years.

She's also excited to introduce the cuisine to an area that doesn't offer a lot of Latin fare. "We're bringing in a unique concept," she says. "We've seen a lot of new faces and have had the chance to sit down with everyone and get to know the people here."

The first few days in Littleton were busy, and the family plans to hold a grand-opening celebration later this month. "We're glad all this hard work is paying off," Martinez concludes.

La Rola Colombian Kitchen is located at 5350 South Santa Fe Drive in Littleton and is open from 11 a.m. to 8 p.m. Monday through Thursday, 11 a.m. to 9 p.m. Friday and Saturday and 11 a.m. to 6 p.m. Sunday. For more information, visit larolaurbanfood.com.
KEEP WESTWORD FREE... Since we started Westword, it has been defined as the free, independent voice of Denver, and we'd like to keep it that way. With local media under siege, it's more important than ever for us to rally support behind funding our local journalism. You can help by participating in our "I Support" program, allowing us to keep offering readers access to our incisive coverage of local news, food and culture with no paywalls.
Make a one-time donation today for as little as $1.