Lawrence Pierre Has Passed Away, but His Son Carries on the Soul Food Tradition 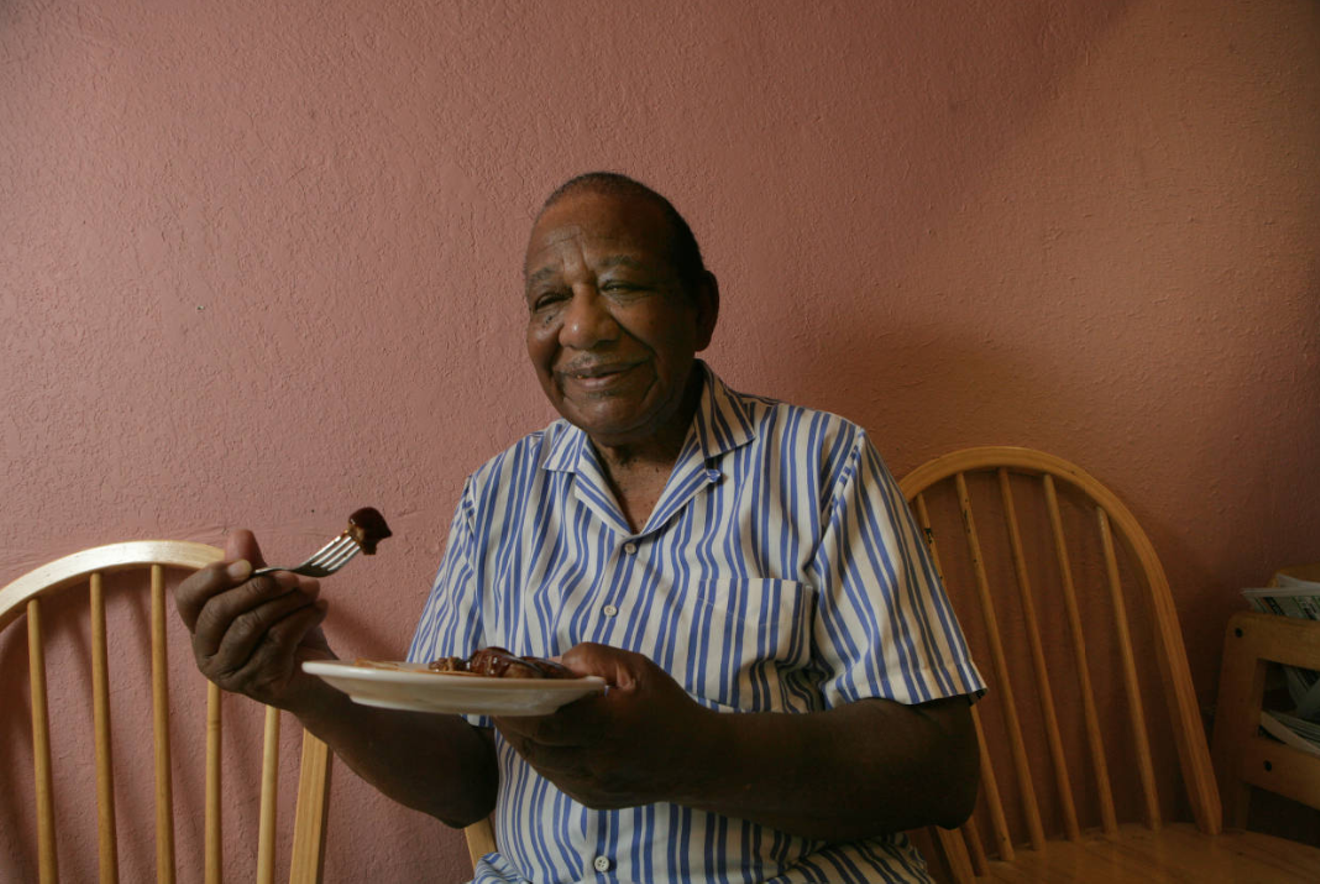 Lawrence Pierre at his restaurant, Pierre's on Madison, in 2008. Denver Public Library Digital Collections
Only a handful of restaurants currently represent Denver's soul food scene, but there was a time when choices were far more abundant for dressing up for Friday supper or Sunday lunch at Black-owned restaurants. One of those, which ran for more than half a century, was Pierre's Supper Club, owned and operated by Lawrence Pierre.

Lawrence Pierre passed away at the end of August, and services were held at St. Ignatius of Loyola Catholic Church last week, but his seventy-year-old son, Valcour "Val" Pierre, still carries on the soul food tradition. According to Val, his father's restaurant opened in 1947 at West First Avenue and Sheridan Boulevard before moving and then moving again, eventually settling in at 2157 Downing Street twenty years later. Lawrence ran Pierre's Supper Club there until he sold it in 2003; the new owner closed it three years later.

Val recalls helping his dad at the restaurant when he was only ten years old. He went away to college for four years, but otherwise he's spent his whole life in food service.

In 2008, Lawrence gave it one last go in the business, opening Pierre's on Madison at 3445 East 28th Avenue. He was already 82 years old at the time, and the restaurant, much smaller than the legendary Pierre's Supper Club, ran for two years before closing. He also sold hot sauce and a seasoning mix under the Pierre's brand.

At about the same time, Val was out on Denver's streets with his Pierre's Mobile Soul Food truck, which he's still running today. "We're probably busier now than we've ever been," he says of this year, despite the economic slowdown caused by the pandemic.

Pierre's Mobile Soul Food is primarily a catering operation, but Val still takes walk-up customers. He says tastes have changed over the years and restaurants have adapted to trends, which is why there are fewer soul food restaurants than twenty or thirty years ago. "I've been vegetarian for 53 years, but I still sell a lot of meat," he adds.

He's also still making Pierre's hot sauce, along with his longstanding menu of fried catfish, hot wings, pork chops, sandwiches and burgers. You can find the menu on the Pierre's Mobile Soul Food website, then call 720-297-1259 to place your order.

After Pierre's Supper Club closed on Downing Street, Randall Borne — one of Lawrence's nephew's — opened Randall's at Pierre's there, running it until the building was sold to make way for condos. Borne then moved Randall's to 2217 Welton Street, where the restaurant and music venue operated until two years ago, when he was again forced to move because of real estate deals. But Borne found a new home for Randall's at 3349 York Street; he's been working on the space for more than a year, so his New Orleans-style cooking will soon return.

Other soul food options around town include the Welton Street Cafe and CoraFaye's Cafe, which are both open for takeout, as well as Genna Rae Wings & More and the Blazing Chicken Shack II, both in northeast Denver.
KEEP WESTWORD FREE... Since we started Westword, it has been defined as the free, independent voice of Denver, and we'd like to keep it that way. With local media under siege, it's more important than ever for us to rally support behind funding our local journalism. You can help by participating in our "I Support" program, allowing us to keep offering readers access to our incisive coverage of local news, food and culture with no paywalls.
Make a one-time donation today for as little as $1.