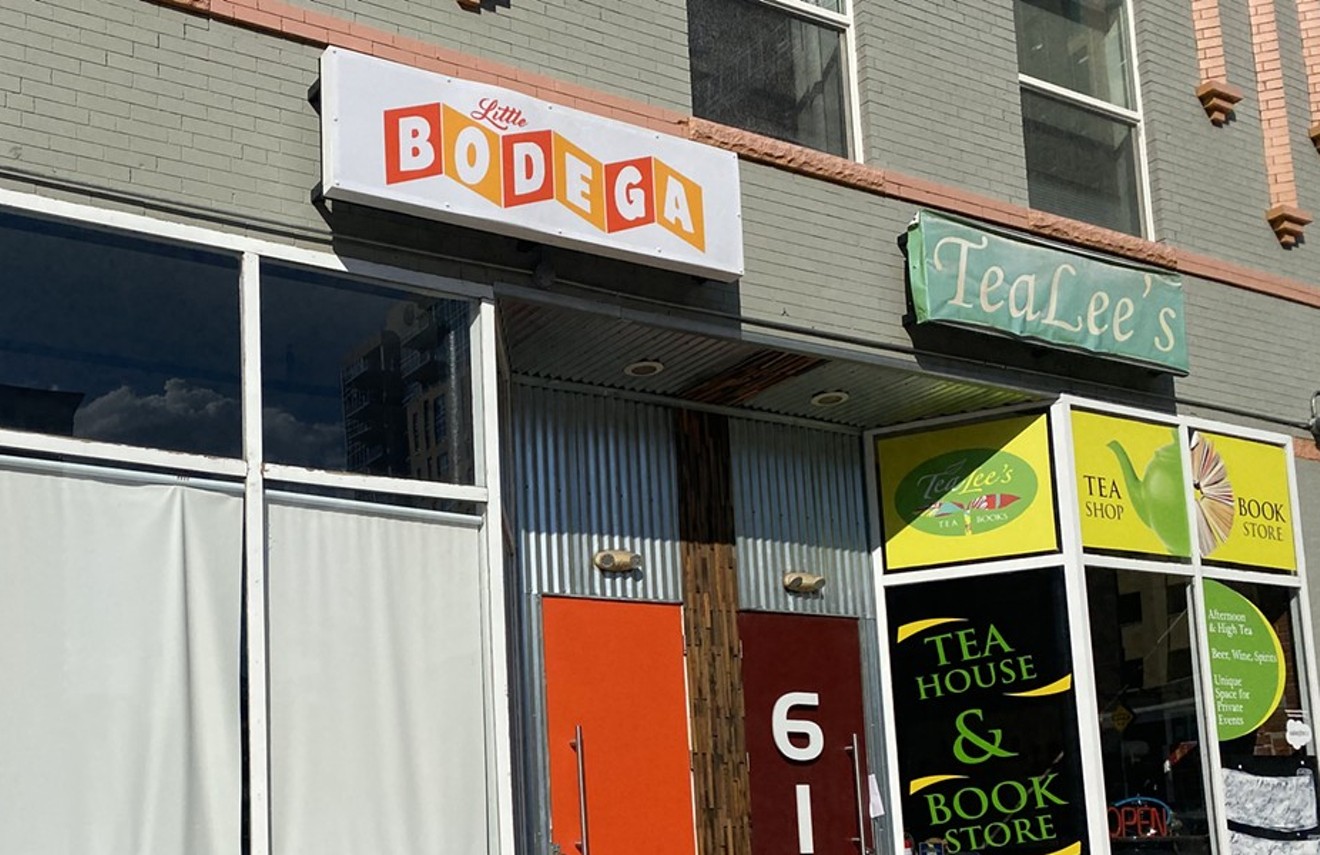 Kristin Pazulski
Along with the New York-inspired Rosenberg's, Famous Original J's and Lou's Italian Specialties from restaurateur Joshua Pollack and the recently opened Duke's Good Sandwiches, Five Points residents will have another taste of the East Coast at their fingertips with the upcoming opening of Little Bodega, a small grocery and deli at 613 22nd Street.

Not to be confused with the sandwich shop Bodega, opening soon in Sunnyside, or Fresh Thymes' offshoot called Bodega, which debuted in Boulder earlier this year, this bodega iteration is inspired directly by the small grocers owner Natasha Butler patronized while living in New York. "It felt like a slice of home or community in a huge city, when you can often fly under the radar," she says.

Originally from Missouri, Butler fell in love with her local bodega, where the owner knew her by face and order; when she walked in, she rarely had to wait. If there was a long line, the owner told whomever was working behind the counter to make her sandwich first. She didn't know his real name, but called him "Frogman" because of his voice.

When she moved to Denver four years ago, Butler missed that immediate sense of community. She was surprised to find that residents in such a big city were dependent on big grocery stores a distance away. After losing her full-time job as a project manager and doing some soul searching, she started plans for her own Little Bodega. Butler intends to create a colorful community vibe at Little Bodega.
Kristin Pazulski
The market will carry staples like snacks, dry goods, household items, frozen dinners and cold drinks. It will also sell lottery tickets, but while Butler hoped to sell tobacco products, her proximity to a school prevents her from being able to.

There will be a made-to-order sandwich counter and deli, as well, with drip coffee served by the cup. After the initial opening, Butler plans to roll out a breakfast menu at the deli.

Since starting the project, she's fielded questions from friends asking why she's opening something like a 7-Eleven, but a neighborhood bodega is so much more than that, she notes; it's a place where everyone knows your name — or if not your name, your face and order, like her Frogman. "I want to build something as close to a New York bodega as possible," Butler says.

Choosing Five Points as the location for Little Bodega was intentional for Butler, who is half Black, noting that she wants to "foster more diversity back into the [Five Points] community." She adds, "I was not expecting it to be so white. Denver isn't a small city."

To get to know the neighborhood better, she's been working next store to the future Little Bodega at TeaLee's Tea House & Bookstore. "I call it my internship," Butler says, laughing. Expect black and white checkerboard designs and lots of orange at Little Bodega.
Kristin Pazulski
Neighbors gather in TeaLee's for news, gossip, conversation and company. For Butler, it's a great way to get to know her future customers, and she views owner Risë Jones as her mentor. "She is who I want to embody in business and in general," Butler says.

Right now, Little Bodega's storefront is showing snippets of its future: the sign is up, and the door is painted in Butler's favorite color, orange. She plans to create a vibrant store vibe, decorated in orange with black-and-white checkerboard patterns. She wants the look to be sharp but not overly cute —"a 'shoppe' with a 'ppe,'" as she describes it.

Inside, materials for shelving sit on the floor surrounding an ad hoc desk where Butler currently works while  waiting on permits to finish building out the space. Once those are in place, she expects the buildout to take two or three months. "I was hoping to be wrapping up this month," she admits, but now she's aiming to open in the fall.

Little Bodega will be located at 613 22nd Street. For more information, visit littlebodegadenver.com or follow the store on Instagram and Facebook.
KEEP WESTWORD FREE... Since we started Westword, it has been defined as the free, independent voice of Denver, and we'd like to keep it that way. With local media under siege, it's more important than ever for us to rally support behind funding our local journalism. You can help by participating in our "I Support" program, allowing us to keep offering readers access to our incisive coverage of local news, food and culture with no paywalls.
Make a one-time donation today for as little as $1.
Kristin Pazulski has been a renaissance faire wench, a reporter, an espresso-shot slinger, an editor of a newspaper for the homeless and a grant writer. She's now a freelance writer covering Denver's restaurant scene.
Contact: Kristin Pazulski