Dan and Michelle Sawyer are behind the new sandwich shop and bakery. Kristin Pazulski
Two new businesses will open in Five Points on June 22: Duke’s Good Sandwiches and Scratch Bakery and Market, both located at 2748 Welton Street.

Duke’s is the brainchild of Dan Sawyer, a color specialist for a fabric company who lives in Five Points with his wife, Michelle, just blocks from where their new businesses are located. Dan came up with the idea for an East Coast-inspired sandwich shop while traveling in New York. “I just thought it would go great with the neighborhood,” he explains. The name is partially an homage to the history of the Five Points neighborhood, where Duke Ellington once visited and played at the nearby Rossonian Hotel.

Michelle told him to go for it, thinking she was calling his bluff. “He always has crazy ideas,” she explains. But this time, Dan ran with it.

When they found the perfect location for the sandwich shop, they also found an opportunity to launch a second business. Duke's kitchen and patio only took up the back end of the leased space. So Michelle, a lifelong home baker, decided she’d operate Scratch Bakery and Market out of the Welton Street-facing storefront.

The space is owned by the Flyfisher Group, a private equity investment firm headed by Matthew Burkett, a longtime business partner of Denver native Robert Smith, who happens to be the wealthiest Black man in America. The company originally purported to be injecting more capital into Five Points to help preserve the neighborhood, but recently business owners charged it with hurting the area more than it has helped. 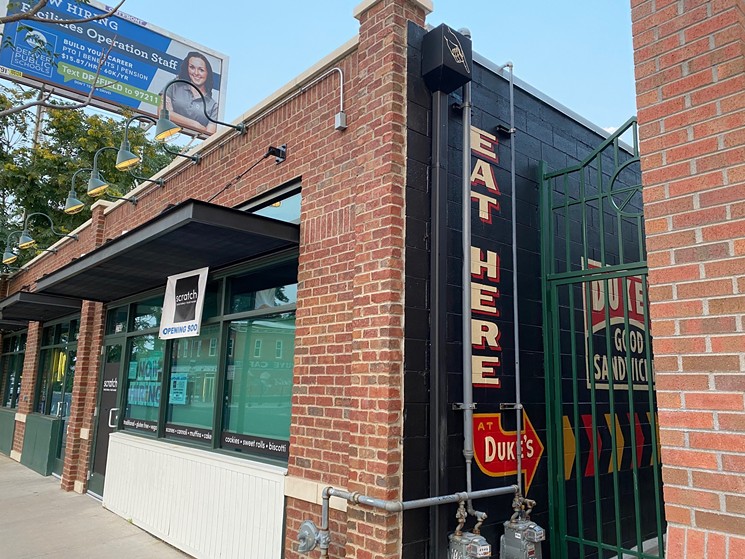 Duke's and Scratch are on the same block as two other East Coast-inspired eateries, Rosenberg’s Bagels & Delicatessen (which recently reopened with a new grab-and-go model) and Famous Original J's Pizza from restaurateur Joshua Pollack.

Michelle and Dan have spent the last year working on the menu for both storefronts. Duke's offerings will include four sandwiches: Italian sausage, meatball, Caprese and the star of the menu, the Denver chopped cheese, inspired by the popular sandwich served at New York City bodegas. Here, it's made with griddled ground beef and melted white cheddar and served with chopped onions, pepperoncini and mayo on a buttered hoagie roll. All of the sandwiches will be served from a walk-up window facing Clarkson Street, though there will be a large patio with six long picnic tables.

Scratch will serve baked goods as well as a selection of locally made food items. “We’ll just have stuff your mom or grandmother would have made,” Michelle says, listing off scones, biscotti, dessert breads and cinnamon rolls as a few of the options along with drip coffee. Four cafe tables will be available for small groups to have dessert and coffee. The Sawyers are hoping to add wine and beer to the menu soon after opening, as well.

Michelle, a former nurse, will be the face of Duke’s and Scratch. She left nursing right before the pandemic started, though she worked in Aurora Public Schools through the 2019-’20 school year. Scratch and Duke’s will be her full-time focus while Dan retains his job for now.

Duke's and Scratch Bakery are the latest — but certainly not the last — changes in this ever-evolving Denver neighborhood with deep roots.

Duke's Good Sandwiches and Scratch Bakery and Market are located at 2748 Welton Street. Duke's is open 11 a.m. to 8 p.m. Wednesday through Monday, and Scratch is open 7:30 a.m. to 2:30 p.m. Wednesday through Sunday. For more information, visit dukesgoodsandwiches.com.
KEEP WESTWORD FREE... Since we started Westword, it has been defined as the free, independent voice of Denver, and we'd like to keep it that way. With local media under siege, it's more important than ever for us to rally support behind funding our local journalism. You can help by participating in our "I Support" program, allowing us to keep offering readers access to our incisive coverage of local news, food and culture with no paywalls.
Make a one-time donation today for as little as $1.
Kristin Pazulski has been a renaissance faire wench, a reporter, an espresso-shot slinger, an editor of a newspaper for the homeless and a grant writer. She's now a freelance writer covering Denver's restaurant scene.
Contact: Kristin Pazulski