Resendiz is working on the fall menu for his new food truck, Luchador, and one of the dishes he's creating draws strongly from both his Mexican heritage and the nine years he spent at two of Denver's best Italian restaurants: elote tortellini, based on the iconic south-of-the-border street food consisting of grilled corn on the cob doused in mayo and chile. Tiny horseshoes of tender, handmade pasta stuffed with roasted poblanos, corn and requesón (a soft cheese similar to Italian ricotta) may sound delightful to you, but Resendiz's abuela is having none of it. "How can you say it's elote if it's not elote?" she gripes to him. "No! It's pasta!"

It's been a long road for Resendiz to launch his own food truck and earn his grandma's affectionate ire with this dish. He moved to the U.S. in 2002 from Mexico City, and while he soon started working in restaurants, he doesn't consider those early efforts when asked when he started cooking professionally. "With Chinook Tavern, that was 2008," he answers. "That’s when my passion started for the real kitchen. ... At Chinook, you had a seasonal menu; you had to bring your own knives." Previous restaurant jobs, he reports, left him feeling "like a machine" — bored with cooking never-changing menus.

That changed when he interviewed at Panzano in 2012, where chef Elise Wiggins ran the kitchen and collected buckets of awards for her Italian cuisine. Resendiz was expecting a simple interview; instead, he was charged with manning the grill and pasta stations the same day — a busy Friday night. "I cannot say no," he recalls. "I said, 'Yes, I am ready.'" He snuck into the bathroom with a menu before starting his stage to commit it to memory, all while saying to himself, "You've got this. You've got this." 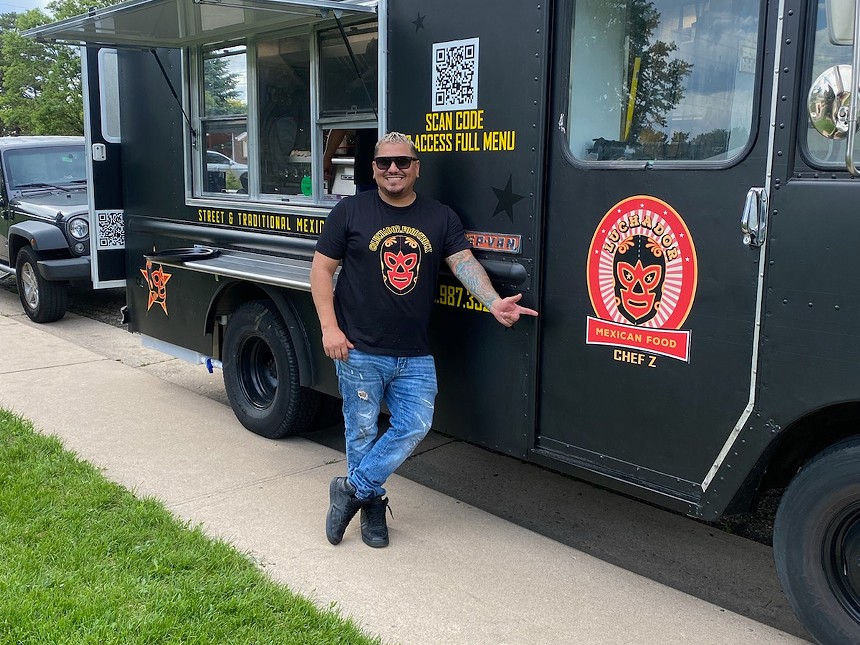 Chef Zuri Resendiz with his pride and joy, Luchador.
Courtesy Zuri Resendiz
The night went swimmingly ("At 10 p.m. I asked, 'Am I staying?' and they were like, 'Bro, you're staying!'" he remembers); Resendiz still calls it one of his best days. He spent the next few years cooking alongside Wiggins, working his way up the line and through culinary school. When Wiggins left Panzano in 2016 to open her own restaurant, Resendiz followed (he was promoted to executive sous chef at Panzano the same day he handed in his resignation). He cooked at Wiggins's Central Park eatery, Cattivella, as chef de cuisine until 2021, when he took a position as executive chef at Shanahan's Steakhouse.

All together, Resendiz worked with Wiggins for nine years — a long time for an ambitious young chef, especially one who gained national exposure along the way (he's appeared on multiple episodes of the Food Network's Chopped and Guy's Grocery Games). "Elise is a great teacher," he says when asked why he stayed with the chef for so long. "I had so much to learn from her. I say that as a chef, you don’t learn everything you need to learn until after one year." He describes Panzano as a "monster," with quarterly menu changes, banquets and cooking classes constantly providing him learning opportunities — not to mention the valuable experience he gained helping Wiggins open Cattivella.

That level of experience is what pushed Resendiz to strike out on his own with Luchador. "I always did a special of the day," he says, "and little by little, you have this crowd that loves your food and starts texting you. I always involved the restaurants, but after being on Food Network, people started asking for my Mexican food...asking, 'Can you do it for me, and how much will it cost?'" That experience planted the seed for Resendiz to consider launching his own concept. 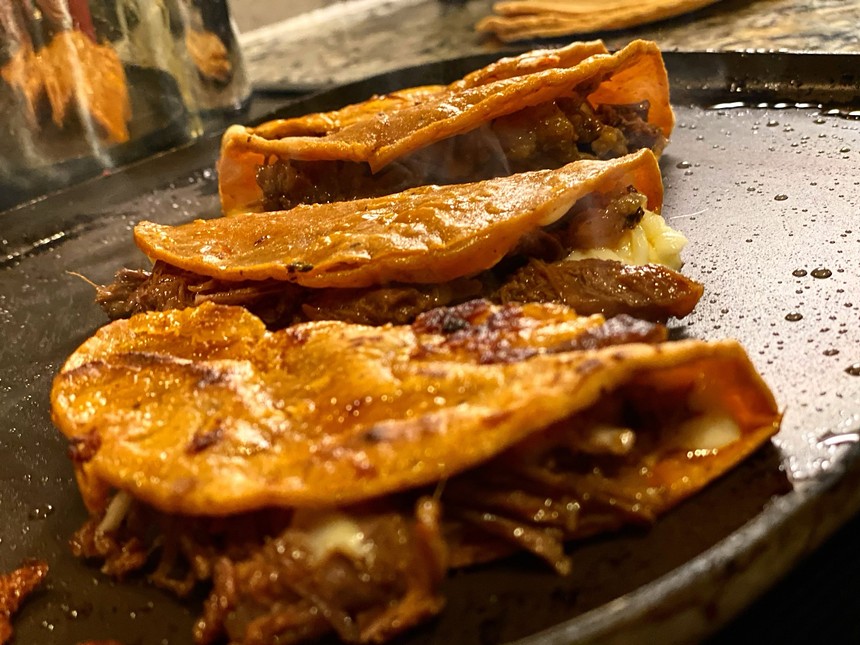 Who doesn't like birria tacos?
Courtesy Zuri Resendiz
He was initially intimidated by the challenges of starting a food truck in the wake of COVID, but then he attended a food truck festival and found himself unimpressed by the quality of food at some outfits. "I don't want to talk badly about anyone," he says. "It's not because of the ingredients, but because of lack of experience. I thought, 'I can do this.'"

So after eleven months at Shanahan's, Resendiz left to open Luchador in May. It was a bit late in the season, he says; many food trucks begin booking in February, and Luchador didn't get rolling until almost June. But business is strong. Resendiz is now booking holiday events and targeting breweries in the Tech Center, close to where he lives. "My main goal is to have a good and solid product first. Once I have customers, I can show them what I'm capable of."

The details of the Mexican street food he's turning out at Luchador matter as much to Resendiz as they did when he was cooking high-end Italian cuisine. For example, the carne asada he uses for tacos is made from skirt steak marinated for 24 hours. "People say carne asada isn't marinated," he says. "Well, mine is. Why? Because it makes it more tender." He also serves up the Luchador Platter (which in this case is actually a bowl) piled high with crispy potatoes, black beans, guacamole, salsa and birria, a throwback to his childhood, when he'd stir together those ingredients for a hearty after-school snack. Recently, Resendiz's customers have taken to ordering the platter late at night, taking it home and using it to make a burrito the next day after the flavors have melded.

His favorite dish, says Resendiz, are his tacos al pastor. "I was inspired by street pastor. I don’t use a trompo, but believe me, the flavor is there," he says. "My birria is also on point." But with so many years working in seasonal Italian restaurants and his own drive to experiment, he's not content to stick to familiar dishes. "I’m still a chef," he declares. "I’m working on my fall menu. I'm basically going to use my Italian  background." He's dialing in his version of birria ramen (after years of making pasta, he says, "I'm making my own ramen noodles, of course") and working on that elote tortellini that gave his grandmother conniptions.

Find Luchador's weekly schedule on Instagram at @luchador.foodtruck.
KEEP WESTWORD FREE... Since we started Westword, it has been defined as the free, independent voice of Denver, and we'd like to keep it that way. With local media under siege, it's more important than ever for us to rally support behind funding our local journalism. You can help by participating in our "I Support" program, allowing us to keep offering readers access to our incisive coverage of local news, food and culture with no paywalls.
Make a one-time donation today for as little as $1.