Resendiz, who is originally from Mexico City, got his early inspiration from his mother, grandmother and aunts. "I come from a family of cooks," he explains, "and they all brag that they are the best." For the record, he says that "all of their food is amazing."

His family sold carnitas, barbacoa and other dishes to make extra money, and Resendiz would help prep the food. "Without knowing it, I was training for what I am right now," he says.

After he moved to the United States in 2002, one of his first jobs was as a dishwasher. But he soon moved to the back of the house, where his knife skills and culinary knowledge set him up for success. "In that moment, I knew that I really liked the kitchen. I'm in love with the concept of the transformation of food," he explains.


In 2012, Resendiz began working with Elise Wiggins, then the executive chef at Panzano. Under her mentorship, he worked his way up to sous chef, and when she opened her first restaurant, Cattivella, in 2017, Resendiz moved there, as well, eventually becoming chef de cuisine. But in early August, Resendiz left Cattivella. "I've been with chef Elise for nine years," he says. "I've been working side by side with her all that time, and it was a huge, huge pleasure and motivation and inspiration, but as chefs, we're always looking for our own path."

Resendiz's path led him to Shanahan's Steakhouse at 5085 South Syracuse Street, where he's now leading the kitchen as executive chef. "I told the owner, 'I can bring flavor to your concept,'" he explains. "I know you have the brand, and the brand is excellent, but you need some freshness." In order to put his own spin on the menu, Resendiz is changing a majority of the items — although "steaks are steaks," he notes of the one section he won't be tinkering with — and reimagining appetizers and sides like an elote-inspired take on cream of corn.

"The feedback has been great," he says of the first stages of menu development. "October is when we'll be announcing the new menu, so I'm pretty excited for that." 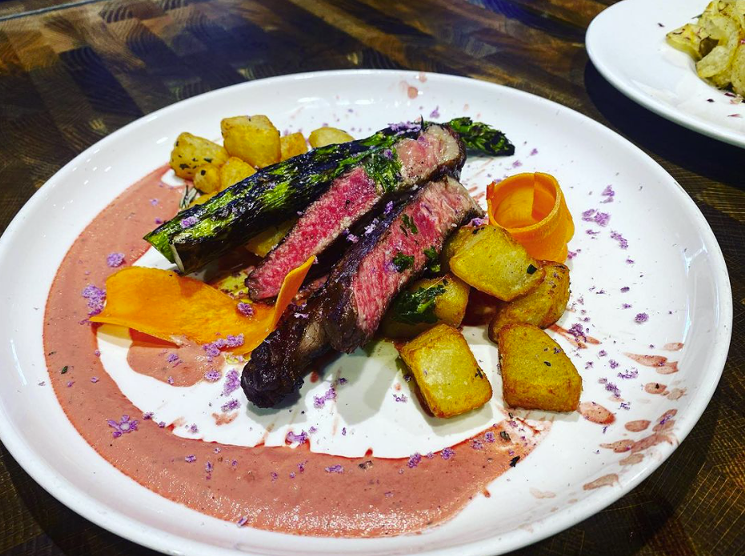 Resendiz created many wood-fired dishes, like this ribeye, while at Cattivella.
Zuri Resendiz/Instagram
Also exciting: Resendiz's budding television career. After appearing twice on Guy's Grocery Games, the chef kept in touch with the Food Network. He also frequently posted his culinary creations on his Instagram, including many of the wood-fired dishes he was cooking at Cattivella. When the Food Network started planning a special edition of Chopped called "Playing With Fire," Resendiz was a natural fit.

"Since I started cooking when I was sixteen, my dream was always to be on a Food Network show," Resendiz explains. "Chopped was one of my inspirations. I used to watch it every single day, so I was super nervous, but I was excited and happy as well."

The filming experience itself was surreal. "You cannot believe you're there; your body is present, but your mind is thinking a million things," he adds. Despite "butterflies in [my] stomach," Resendiz came out on top in the episode that aired August 17, which meant he gets to compete in the Playing With Fire tournament's finale, which premieres on September 7.

"It's not only a huge accomplishment for me, but also for my family," Resendiz says.

And Chopped may be just the beginning: Resendiz is in the interview stages for two other shows. But this chef is already on fire.
KEEP WESTWORD FREE... Since we started Westword, it has been defined as the free, independent voice of Denver, and we'd like to keep it that way. With local media under siege, it's more important than ever for us to rally support behind funding our local journalism. You can help by participating in our "I Support" program, allowing us to keep offering readers access to our incisive coverage of local news, food and culture with no paywalls.
Make a one-time donation today for as little as $1.