Handmade soba noodles at Matsuhisa are served chilled, with an option of tempura shrimp and vegetables. Mark Antonation
Ramen is the attention hog of Japanese noodles, often more for the rich broths, the soft eggs and the variety of toppings than for the noodles themselves. People just love to slurp a gussied-up restaurant version of the instant noodle bowls that provided sustenance through their broke college days. They love it so much, they don't realize just how good a noodle can be.

A visit to Matsuhisa would change all that.

Despite the popularity of ramen shops in Denver, most kitchens don't make their own noodles. That's not necessarily a bad thing, since fresh noodles are available from high-quality producers, some of which work with restaurants to come up with a custom noodle (and often more than one, to pair with specific styles of broth) based on the chef's specifications. They're a far cry from those dehydrated bricks on grocery-store shelves. 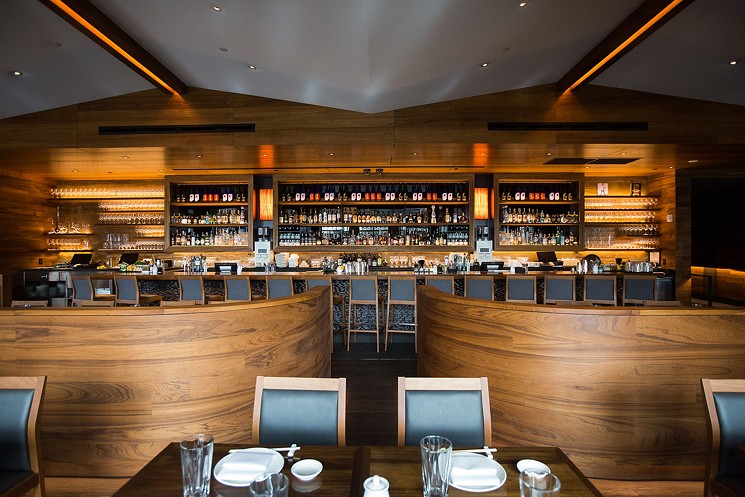 A seat at the bar is a good place to enjoy soba noodles and other lunch dishes.
Danielle Lirette
Other types of Japanese noodles receive far less attention than ramen. Chewy udon noodles show up on the menu of just about every Japanese restaurant in town, but they're seldom the star. Udon noodles don't get the attention here that they receive in Japan, or even in larger cities in the United States like Los Angeles and Seattle, where handmade udon noodles are proudly trumpeted at the eateries that take the time to do them right. That's not to say that the chefs at Japanese restaurants in Denver are lazy, but the city has a far smaller Japanese population, and the demand for the best noodles (and the criticism when they aren't) isn't as loud.

Rarer still are soba noodles, the delicate cousin of udon, made with varying percentages of buckwheat flour, which gives them a gray-to-brown color and a flavor that ranges from mild and floral to full-on farmhouse. There are plenty of good soba noodles available dry, which is what the vast majority of restaurants use. The broth, then, or the other ingredients incorporated in dishes that serve the noodles chilled or stir-fried, become the things that make these dishes different. Well-made soba bowls can be found at traditionalist spots like Domo, Sushi Den and Sakura House (for the budget-minded).

But handmade soba noodles are nearly impossible to find in Denver. Why? They're tricky to master because there's no gluten in buckwheat flour, so 100-percent buckwheat noodles aren't common; often there's at least a little wheat flour to help bind the dough. And as is the case with udon and ramen, few Denver diners are crying out for handmade soba, so restaurants are less likely to make the effort.
That's not the case at Matsuhisa, though. The Cherry Creek branch of chef Nobu Matsuhisa's international restaurant group, like all of its siblings, is known for luxurious ingredients, meticulous preparations and attention to detail; the soba noodles are no exception. But even here, you need to read the full descriptions on the menu to understand what you're ordering. The regular soba noodles listed under the soup menu aren't made in-house, even if the warm bowls, fitted with chicken, shrimp or tempura, make a good starter before a round or two of sushi.

Look instead for the "cold house made soba" on the lunch menu, marked with the phrase "limited quantities." These noodles are limited because only one chef, Toru Watanabe, makes them, so if he's not at the restaurant (which is seldom, since he's the head sushi chef), they don't get made.

Creating the dough for soba isn't much different from making any standard flour-and-water dough, but from there it must be rolled out into a thin, even sheet so that each noodle is the same thickness. The dough is floured to keep it from sticking to itself as it's folded several times and then sliced into noodles with a long, flat-bladed knife. Precision and focus — along with years of practice — yield a sheaf of uniform soba that the chef shakes gently to remove the excess flour.

The noodles are then cooked in a delicate dashi, served on a bamboo mat in a shallow bowl filled with ice, which keeps the soba at the perfect temperature throughout the meal, and garnished with a small nest of julienned nori. At $16, the mound of noodles isn't cheap, but the gentle flavor of the earthy buckwheat and hints of the sea from the dashi broth (made with dried bonito flakes and kombu seaweed) are worth the indulgence. And for only $6 more, you can get an accompanying plate of mixed tempura, with a couple of long, skinny shrimp and an assortment of vegetables. A side of warm broth is also part of the presentation.

This noodle dish is on the opposite end of the spectrum from tonkotsu ramen, which parades its fatty broth and sumptuous braised pork belly flamboyantly. Compared with that, the chilled soba at Matsuhisa is the minimalist Mark Rothko painting alongside the surrealist excess of Dalí. Ramen overloads your senses, but handmade soba is the perfect noodle to quietly contemplate while enjoying its subtle beauty.

Matsuhisa is located at 98 Steele Street and is open for lunch from 11:30 a.m. to 2:30 p.m. Monday through Friday. Call 303-329-6628 or visit the restaurant's website for more information.
KEEP WESTWORD FREE... Since we started Westword, it has been defined as the free, independent voice of Denver, and we'd like to keep it that way. With local media under siege, it's more important than ever for us to rally support behind funding our local journalism. You can help by participating in our "I Support" program, allowing us to keep offering readers access to our incisive coverage of local news, food and culture with no paywalls.
Make a one-time donation today for as little as $1.