Edgewater Public Market will soon open its 50,000-square-foot food and retail hall at 5505 West 20th Avenue, with sixteen food venues and a rooftop bar with views of Sloan's Lake and the Denver skyline. Meta Burger co-owner Matthew Coates says the market's developers approached him with a desire to add a vegan option as one of the full-sized restaurant spaces alongside the main food court. “We’re excited to have the ability to get our food to a wide variety of people who aren’t necessarily looking for it,” he explains.

Coates believes customers coming to Edgewater Public Market will be intrigued when their plant-based friend’s sandwich looks just like a beef-based burger and will want to give it a try. That's a considerable change from Meta's original location at 7950 East Mississippi Avenue, where the somewhat hidden spot attracts dedicated vegans on the hunt for something new and free of meat, dairy and eggs.

The menu will be the same at both Meta Burger locations. “We focus on good food that just happens to be vegan,” Coates says, adding that he's thrilled to have another opportunity to put forth accessible, inexpensive plant-based options that are healthier than traditional fast food (burger patties, for example, are 130 calories, with 19 grams of protein). 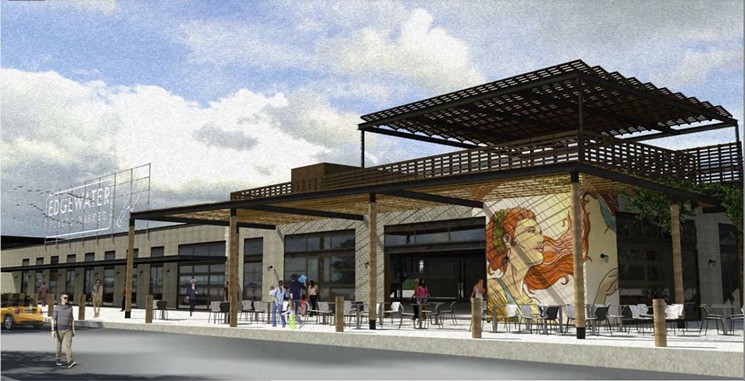 Edgewater Public Market is aiming for an early fall opening, and will be joined by Meta Burger next year.
Courtesy Edgewater Public Market/Meridian 105 Architecture
His goal is to present food that's familiar to everyone, so the descriptions — and flavors — will be just like what people have been eating their entire lives. Favorites since opening in August 2018 include the classic burger, the crispy Buffalo chicken sandwich and the Flatiron burger, topped with steak sauce, shaved Brussels sprouts, shallots, grilled mushrooms and dairy-free gouda cheese, which won a People’s Choice award at the Seed Plant Based Food & Wine Festival in Miami.

Bi-weekly specials are also part of the program; Coates uses the popularity of specials and social-media response to gauge menu changes. “We listen to what the people in the community have to say and [whether] we get a loud response,” he notes. The chicken tender basket and Philly cheesesteak are items that made it onto the daily menu after rave reviews as specials.

Centennial design firm StudioAtlantis is helping Coates create the Meta Burger of his dreams in an 1,800-square-foot space. “We want a modern space that is inviting to everyone,” he says. The plan is to build an open kitchen that will bring the consumer in as part of the experience and add to the community feel. Being part of a project that promotes Colorado businesses was part of the appeal of opening at the market, so he plans to continue the trend by enlisting local artists to paint murals inside the new location.

While the Edgewater Public Market is expected to open in November 2019, Coates says Meta Burger won’t debut until May or June, since construction on his space is part of a separate phase of the project.

For more information about Meta Burger, visit the restaurant's website or call 720-535-9707.
KEEP WESTWORD FREE... Since we started Westword, it has been defined as the free, independent voice of Denver, and we'd like to keep it that way. With local media under siege, it's more important than ever for us to rally support behind funding our local journalism. You can help by participating in our "I Support" program, allowing us to keep offering readers access to our incisive coverage of local news, food and culture with no paywalls.
Make a one-time donation today for as little as $1.
Kristen Kuchar is a Colorado writer covering dining and the beverage industry, including wine, beer, cider and spirits. Her articles have appeared in VinePair, the Beer Connoisseur, Beer Advocate, Craftbeer.com, Zymurgy and more. She has a WSET Level 1 certificate and is a Certified Beer Server by the Cicerone Certification Program.
Follow:
Twitter: @KristenKuchar
Instagram: @kristen_kuchar