The name is also a fitting reminder of Wilson’s professional journey and how he got his start in the kitchen. At fourteen years old, he was caught red-handed selling weed behind a pizza restaurant in New Jersey. Instead of calling the cops, the owner gave him a job in the kitchen. “I was kind of a degenerate, I’m not gonna lie,” Wilson admits, laughing. “He put me to work and made me an asset. That’s when I learned to love working with my hands.”

From then on, he was hooked. Wilson enrolled in culinary school in Providence, Rhode Island, and found a job at an upscale seafood restaurant. When a chef at the school offered him a connection at Thomas Keller’s Michelin-starred Bouchon Bistro during his sophomore year, Wilson jumped at the opportunity, dropping out of school and moving to California.

In the years that followed, he worked his way up from dishwasher through various kitchen positions with increasing levels of responsibility at increasingly prestigious restaurants. “The theme with all these nice restaurants is they want to teach you their ways, so you start from the bottom,” Wilson explains. The work was hard, but the caliber of training he received and the techniques he learned were world-class. Wilson describes Naughty Cooking Co.'s cuisine as New American.
Bree Brandt
His next stop was Lazy Bear in San Francisco, a two-Michelin-star restaurant where he spent two years foraging wild ingredients for the nightly dinner service. In June 2019, he landed a job at Dan Barber’s two-Michelin-star farm-to-table restaurant, Blue Hill at Stone Barns in New York. Then COVID struck, and Wilson’s world came to a crashing halt. “I felt like I was at the pinnacle of my career and everything just stopped,” he says. “Everyone was told to go home.”

Six months after Blue Hill at Stone Barns shut down temporarily because of the pandemic, Wilson’s brother suggested he move to Denver. “My brother said, ‘Come live in Colorado and enjoy the lifestyle.’ And I said, `That doesn’t sound too bad,’” he recalls. The slower pace was a welcome relief for Wilson, who says he needed a change after years of “grinding away” at Michelin-starred restaurants and coping with the unheralded industry disruption unleashed by the pandemic.

In Denver, Wilson worked a series of jobs before landing a gig at the Wolf’s Tailor, which Bon Appétit named one of America’s 10 Best New Restaurants in 2019. While working there, inspiration struck when he began getting invited to cook for immunocompromised people in their homes. “I was vaccinated and willing to wear a mask, and people wanted a Michelin-quality meal in the comfort of their home,” says Wilson. He began cooking at private dinner parties a few times a month and soon realized that his side hustle could become a full-fledged business.

Since the first Naughty Cooking Co. dinner in December 2021, Wilson has cooked for about thirty parties and is averaging one or two events a week. The meals usually involve ten to fifteen guests, though he accepts bookings for as few as eight people.

Dinner parties are available for as few as eight people.
Bree Brandt
“What deters people from hosting events is all the work that comes with it,” says Wilson. “We take all that responsibility away so people can interact with guests instead of having to cook. All you need is a stovetop and an oven. We bring everything else.”

“Everything else” includes a photographer to document the experience, an extra chef to help cook, decorations and place settings. Naughty Cooking Co. packages start at $45 per person for the “Common” experience, which features hors d'oeuvres and a cocktail hour, and go up to $85 per person for the “Classy” package, which includes a five-course tasting menu — a much lower price point than the tasting menus at many of Denver’s fine-dining restaurants.

Wilson describes Naughty Cooking Co.’s cuisine as New American. Leaning on his years of high-end, vegetable-forward experience, he focuses on using seasonal ingredients and locally sourced produce while employing cooking techniques from around the world. Recent dishes include a Japanese sunomono salad and a bison short rib dish with Palisade plum barbecue sauce. “We try to be different and cook things you can’t get at any of the restaurants around here,” Wilson notes. He’s also extremely accommodating to food preferences and dietary restrictions. “We’ll work with the person having the event to decide the precise type of menu they want,” he adds.

Riley Dmytriw recently hired Naughty Cooking Co. to cater a ten-person going-away party for a friend. “The food was really impressive, and it was nice to have Michelin-star-level food that wasn’t intimidating,” she says of the experience. “It felt like a $300 meal that was somehow made affordable.”

To learn more about Naughty Cooking Co. and to book a party, visit naughtycookingco.com or reach out via Instagram @naughtycookingco.
KEEP WESTWORD FREE... Since we started Westword, it has been defined as the free, independent voice of Denver, and we'd like to keep it that way. With local media under siege, it's more important than ever for us to rally support behind funding our local journalism. You can help by participating in our "I Support" program, allowing us to keep offering readers access to our incisive coverage of local news, food and culture with no paywalls.
Make a one-time donation today for as little as $1. 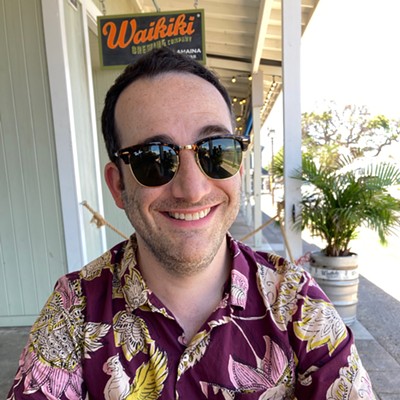 Zach Reff is a Denver-born writer and photographer who enjoys exploring hidden gem restaurants across the United States. He lived and worked in mainland China and Hong Kong for eight years before returning home to Denver in 2014. His work has appeared in publications the Denver Post, the South China Morning Post and the Peak magazine, among others.
Contact: Zach Reff