Should Beers Be Mixed Together? New Belgium Says "Yes" With Twelve-Pack

New Belgium's new mixed twelve-packs, with instructions for blending. New Belgium Brewing
Brewers carefully craft their beer recipes so that when someone drinks the finished product, they notice specific flavors, aromas, textures and colors. If the beer is paired with food, other flavors can come out, or the beer can bring out new flavors in that food. But for the most part, the beer was meant to be enjoyed for what it is.

Some people just aren't satisfied with that, however, so they blend two or even three beers together to create new flavor combinations. Examples are raspberry beers blended with chocolate porters, or vanilla cream ales mixed into a stout. Some brewery taprooms even offer recommendations on specific combinations.

New Belgium Brewing is taking the idea a step further, though, with a new variety twelve-pack called Blend Like a Brewer, which includes six different beers and suggestions for how to mix them together. Each creative combo was recommended by a New Belgium brewer, and each was given a new name. For example, if you mix equal parts Abbey Belgian Dubbel with 1554 Black Lager, you get a "Monk’s Pajamas," according to Geoff Wenzel, who has been a New Belgium brewer since 2013. Then there's brewer Eric Salazar's L'Argento, which is two-thirds 1554 and one-third Cellar Blender, a dark, wood-aged sour ale only available in this twelve-pack.

The idea "was born rather organically in our tasting room," explains New Belgium spokesman Jesse Claeys, where employees usually end the work day with a shift beer. "Rather regularly, our co-workers blend beers together to bring out different flavors and customize to match individual preferences." Recently a new brewer wondered aloud whether the public would be interested in knowing what the brewery staff was up to. 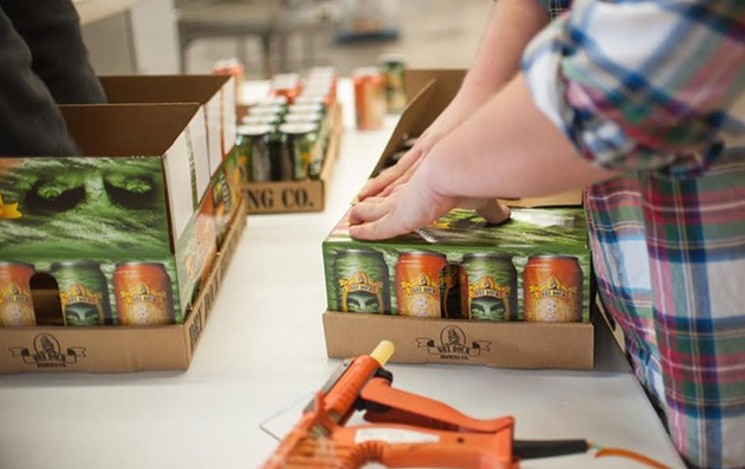 New Belgium wasn't the first to release a mixed pack; this is Dry Dock's version.
Dry Dock Brewing
So why not just drink each beer as it was intended? "Some folks do consider it a bit blasphemous to alter the taste of a beer that has been so meticulously crafted. There is validity to that thought," Claeys acknowledges.  "But the point of the Blend Like a Brewer pack is to take individually excellent beers...and use them to discover something new, to find flavors that are deliciously unique and individual. Our take is that brewing beer is an expression of creativity and that creativity can and should extend to how it is consumed."

He also points out that the recipes were created "by some the nation’s best brewing minds with the included suggested recipe card," meaning the brewers themselves. In addition to Abbey, 1554 and Cellar Blender, the twelve-pack also includes Fat Tire Belgian White, New Belgium Trippel and Citradelic Tangerine IPA.

In October, New Image Brewing in Arvada and 4 Noses Brewing in Broomfield joined forces on an interesting collaboration. Instead of making different versions of the same beer, the two breweries made completely different beers that were designed to be mixed together in whatever combination the drinker chose. 4 Noses brewed a Pale Ale with Motueka and Galaxy hops, while New Image brewed a Sour Ale with orange juice and orange zest. The breweries sold the beers in four-packs, with two of each beer.

And in February 2016, Aurora's Dry Dock Brewing debuted a twelve-pack with six cans of its flagship Apricot Blonde Ale and six cans of Hop Abomination IPA. The brewery serves a very popular blend of the two — called Hopricot — on a regular basis in its taprooms and even fills growlers to go, so the twelve-packs of Hopricot seemed like the next logical step.