The bright and airy main dining area at Noisette. Molly Martin
What: Noisette 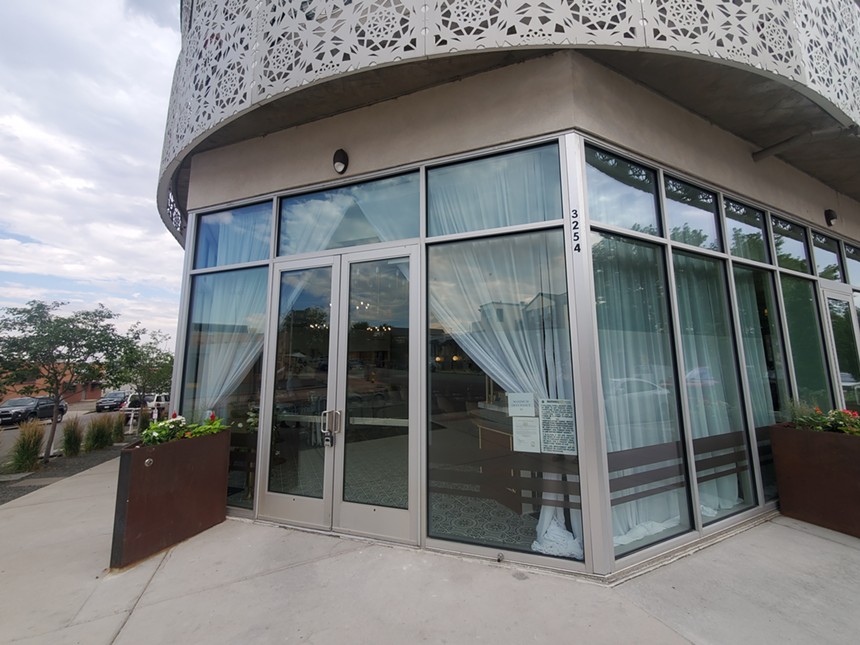 Soft openings are designed to give a new restaurant a chance to work out the kinks before officially welcoming the public — and often, they are (understandably) a bit of a mess. Even after months, sometimes years, of preparation, night one of actually serving guests is the first time that countless pieces must come together. But at the debut dinner for Noisette, the new French eatery and bakery from husband and wife Tim and Lilian Lu that opens to the public on August 5, both the service and the food were lovely — despite the fact that a few finishing touches were still missing.

For starters, there was not yet a sign in front. Architect Brandon Anderson of LivStudio was walking around measuring decibel levels on his phone — thicker curtains will absorb some of the sound, he notes. There were no dimmers for the lights, either, causing stress about creating just the right ambience after dark, and the reverse-osmosis water system hadn't arrived, which meant only bottled still and sparkling was available (something that would normally cost a guest extra to order). 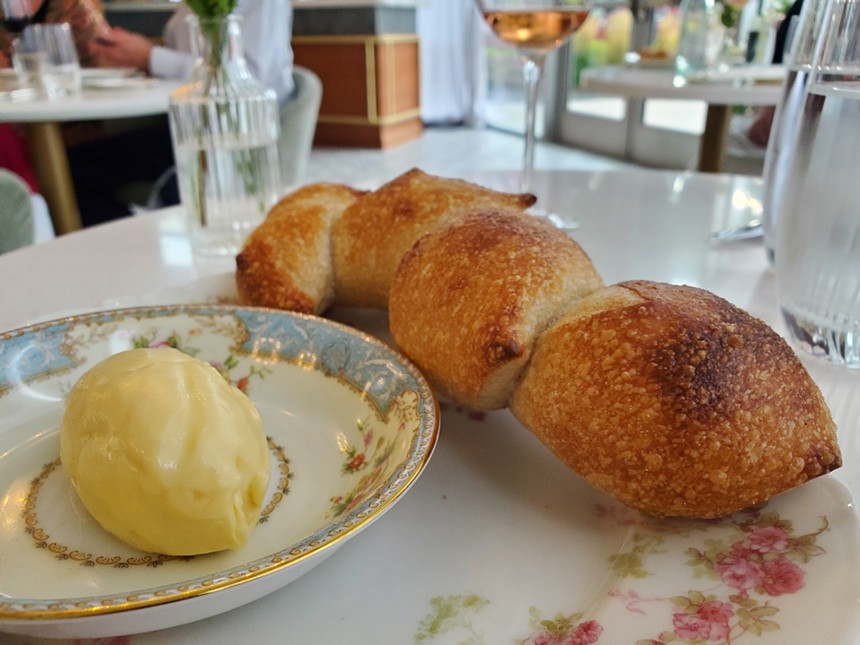 Start with the baguette and cultured butter.
Molly Martin

But most diners would never notice those under-the-radar points, especially with a design that's so distractingly elegant — though not in a stiff, white-tablecloth kind of way. The space, which was formerly home to the restaurant There..., has been transformed beyond recognition — in a very good way. The clean, white decor with pops of pastel and a mix of modern and vintage is inviting and transportive. Small vases of flowers on each table add a romantic touch, as do the mismatched flatware and floral antique plates that Lillian collected over the past year and a half.

A new wall separates the dining area from the bakery, which will open in a few weeks, with daytime hours during which patrons can stop by for bread, sweet and savory pastries, and coffee. At night, the space will be used as a lounge area for those waiting for a table.

The bar, which has no seats, doubles as the host stand, a rarely seen setup that (at least on night one) seemed to work well. Along with a well-curated wine list (priced at $14 to $22 by the glass), the concise cocktail menu includes libations inspired by the brief post-World War I, pre-Prohibition era, like the $16 sweet and smooth Cognac- and Bénédictine-based Fiope "circa 1921," as the menu notes.

The duck with confit potatoes was a standout.
Molly Martin
The Lus both graduated from the French Culinary Institute in New York, and the menu is their elevated take on cuisine bourgeoise, or French home cooking. A baguette served with cultured French butter ($8), some of which is browned before being mixed back in with regular butter and scooped into a perfect quenelle, is a must starter.

Escargot ($17) comes in the form of crisp balls of potato choux pastry with minced snails mixed in and served with an herb aioli. A vegan-friendly entree of chard wrapped around squash and buckwheat served over a smooth and rich mushroom velouté and topped with three grams of Chilean black truffle ($32) doubles as a light starter to share. Other entree options include several fish dishes ($34 to $45), a braised beef shank for two ($68) and the duck breast with ultra-crispy skin ($42). Pro tip: Save a piece of baguette to drag through every last drop of the duck and foie jus that the breast is served over.

Molly Martin
What surprised us: Dessert. With Lillian's pastry chef background, it should be no surprise that you should save room for dessert — but these offers were truly amazing. Order an espresso or aperitif, like the Zirbenz Stone Pine Liqueur, then give ample attention to the last course.

The Peche Melba Parfait ($12) arrived looking like half of a ripe, sliced peach in a shallow bowl. Cut into it, though, and you'll find an orb of custardy, French-style parfait made with white chocolate and vanilla and served semi-frozen. The peach-like exterior is actually a raspberry glaze, and it's served with fresh peach slices, raspberries and dots of chantilly cream for a summertime treat that should not be missed.

The Tarte Tropezienne ($10) stole the show, however. The description is simple: brioche, vanilla, cream. It arrived looking like a Burger King sesame seed bun, straight off a highly styled photo shoot. But those are no sesame seeds — instead, the brioche is topped with pearl sugar, which doesn't melt when baked. The bun is sliced in half and filled with vanilla bean-specked cream, resulting in a bite that evoked all the good things about a glazed Krispy Kreme doughnut minus the oily, fried guilt.

If this dessert is a sign of what to expect when the bakery opens, then LoHi is in for a very sweet treat.
KEEP WESTWORD FREE... Since we started Westword, it has been defined as the free, independent voice of Denver, and we'd like to keep it that way. With local media under siege, it's more important than ever for us to rally support behind funding our local journalism. You can help by participating in our "I Support" program, allowing us to keep offering readers access to our incisive coverage of local news, food and culture with no paywalls.
Make a one-time donation today for as little as $1.