Sippin' Pretty was pioneered in River North. Odell Brewing
It was May 2018, and Brent Cordle and the rest of the staff at Odell Brewing were getting ready to open the company’s first-ever location outside of its home of Fort Collins. After 29 years in business, Odell didn’t need to prove to anyone that it could make terrific beer, but it did need to show that it could strike a chord in Denver’s competitive River North Art District, where there were already a dozen other breweries.

“We really wanted to make sure that every beer that was on tap was amazing and interesting and would really draw people in to check us out,” Cordle says.

So the opening lineup on June 4 of that year included not just some of the brewery’s much-loved staples — 90 Shilling, Rupture Fresh Grind IPA, Drumroll Hazy Pale Ale and Myrcenary Double IPA — but some newer, trendier beers that Cordle brewed on site, including a milkshake IPA, a hazy session IPA, a pineapple Berliner Weisse, a chocolate coffee stout and a guava gose, which is a tart, German-style wheat beer.

That last beer elicited a lot of excitement at Odell, where Cordle, the head brewer at Odell's Five Points Brewhouse, and COO Brendan McGivney had taken note of a consumer trend toward tart fruited beers and decided to roll the dice on a version of the style made with guava, something they hadn’t tried before. Brent Cordle is the head brewer at Odell's Five Points Brewhouse.
Odell Brewing
“It was a slam dunk from day one,” says Odell marketing director Alex Kayne. “People kept asking for it, and we couldn’t keep it off the [menu]. And we thought, ‘Wow, we might be on to something here.’”


That guava gose is now Sippin’ Pretty Fruited Sour and has become Odell’s top-selling beer in supermarkets across its entire twenty-state distribution footprint, as well as garnered 18 percent of its total sales so far this year. Even more impressive is that it is the third best-selling "sour" beer in the country, with a 9 percent market share, according to numbers shared by Odell from the IRI market research firm. That puts it behind only Sierra Nevada Brewing’s Wild Little Things and Dogfish Head’s Seaquench, which are both made by much larger breweries and distributed coast to coast rather than in just twenty states.

The year-round beer, which comes in cans, is so successful, in fact, that Odell is rolling out a second version, Sippin’ Tropical Sour, in October. This one is made with passion fruit, pineapple and tangerine “because they blend so well together,” Cordle says. 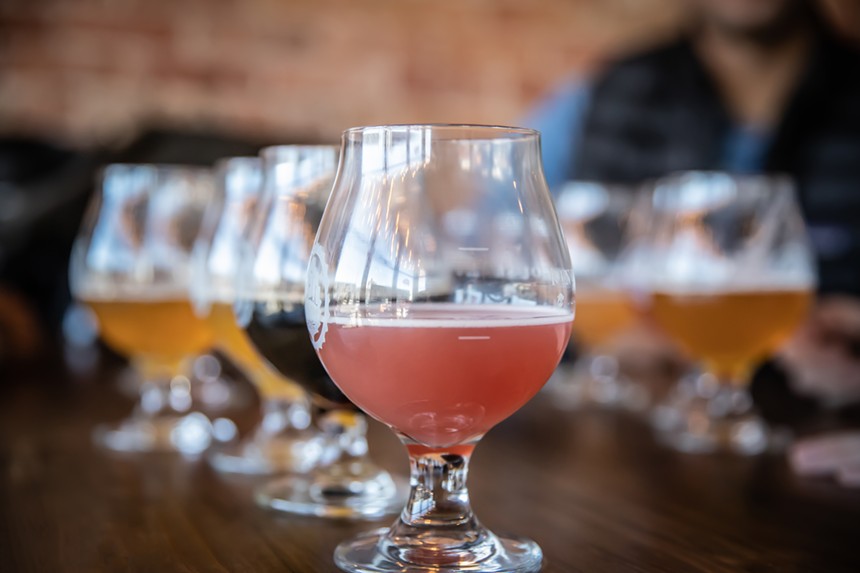 Sippin' Pretty started out as Guava Gose.
Odell Brewing
“Sippin’ Tropical will be year-round, too, and it will sit right next to Sippin’ Pretty on the shelf," Kayne adds. “We thought long and hard about the trajectory of the sour category. We had so much positive feedback that we felt there was room for another one.”

The journey from taproom to major distribution isn’t unusual for Odell’s beers, especially since the company now has three places where it can experiment before scaling a recipe up: its five-barrel pilot brewery in Fort Collins, and its two brewery taprooms in Denver.

Cloud Catcher Milkshake IPA, which was distributed widely in 2018 before being discontinued, was also born in Odell’s RiNo Brewhouse (now called the Five Points Brewhouse). And Odell’s newest hazy IPA, Hazer Tag, was also developed through experimentation at both the Five Points and Sloan’s Lake tap houses. “It was a combination of [Sloan’s Lake head brewer Marni Wahlquist] and I working on different hop combinations and getting the recipe where we wanted it to be,” Cordle says.

Drinking at Odell means you are participating in its R&D.
Odell Brewing
The staff is currently working on a tangerine-infused version of its seasonal Tree Shaker fruited IPA series, as well as Positive Latitude, an imperial IPA made with passion fruit.

Of course, the beers do take some tweaking to get the flavors and ingredients right when they go from being brewed on a ten-barrel system to Odell’s 150-barrel production system in Fort Collins. For example, the brewers changed the ratio of guava purée in Sippin’ Pretty and then added acai and elderberry “to take it to the next level,” Cordle says. Odell also changed the beer’s descriptor from “gose” to “sour ale” because that is what people are now calling tart fruited beers, which are growing in popularity. In the past, sour ales mostly referred to truly puckering Belgian-style ales made with bacteria and wild yeast strains.

“When folks come into one of the breweries on any given day, they are participating in the R&D for us. That's what makes it fun,” Kayne says, adding that the brewery loves to see new beers developed organically in the taproom rather than the boardroom. “We always joke that we're terrible at keeping secrets. Just come to our taproom and you'll see what we're working on.”
KEEP WESTWORD FREE... Since we started Westword, it has been defined as the free, independent voice of Denver, and we'd like to keep it that way. With local media under siege, it's more important than ever for us to rally support behind funding our local journalism. You can help by participating in our "I Support" program, allowing us to keep offering readers access to our incisive coverage of local news, food and culture with no paywalls.
Make a one-time donation today for as little as $1.